Our fearless leader has cast an intoxicating spell on me under which I am happy to be. However, one of the side effects disallows me to imbed YouTube videos herein.

I watched it and sighed. Then I learned that Grant Bailie and John Sheppard were contributors to this “Bible” of contemporary fiction. Bailie was part of “Novel: A Living Installation at Flux Factory, Inc.” in New York in 2005. His first novel “Cloud 8” was a wonderful book wherein the reader steps into the afterlife to find it populated by people who look like Abe Lincoln. His flash fiction delights at every turn.

Ed talked to John Sheppard on Bat Segundo about his 2007 novel, “Small Town Punk.” Sheppard fascinated me from the first time I chatted with him and learned that his sister’s murder fueled his writing in part–much like my brother’s suicide had fueled mine.

Black Arrow Press was still accepting submission for “Santi: Lives of Modern Saints,” so I sent mine along. When it got the thumbs up, I spontaneously combusted with joy. Here is the first paragraph from my story, “Skywriting with King Tut Down at the Little Egypt:”

The pyramid was my favorite thing. It was built out of concrete block, so it was steps all the way up and easy to climb. From the top, I’d look down at the Little Egypt all around and feel like I was floating above the earth. I could stay up there crouched on the rough steps forever, but someone always yelled at me to get down way too soon.

The anthology is scheduled to come out in December 2007. Dig the cover: 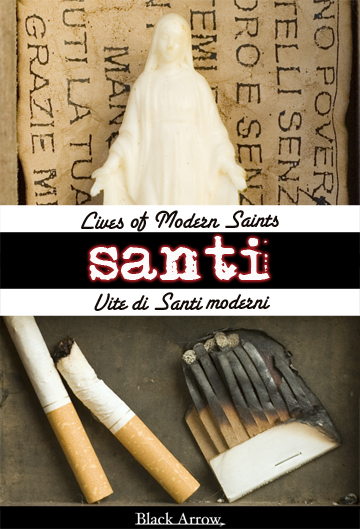 Other contributors include Roy Kesey, Jon Konrath, and Timothy Gager. A complete list is available at the Black Arrow Press page.

Bailie in a box.

The preceding post was brought to you by Smart Erin.