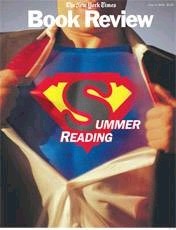 Well, I thought I was done with Sam Tanenhaus. But it appears that I’m not. This is simply too good to pass up. The image to the right is the cover that the NYTBR is issuing for its June 3, 2006 issue, which is designated as its “Summer Reading” issue. And what does that mean? Reviews of books from Martha McPhee, Plum Sykes, Scott Anderson and Sara Gruen. Yup. Real heavy-duty fiction.

But what of literary fiction? Or fiction in translation? Sorry, folks, the Times simply doesn’t do that anymore. And chances are they won’t be doing it anymore. It simply doesn’t fit within the Wagnerian temperament.

Why can’t Tanenhaus be honest and confess that the NYTBR has willfully abdicated its status as a cultural arbiter? Must Tanenhaus hide behind a comic book escutcheon and a cod piece instead of welcoming conversation (such as editors like the LATBR‘s David Ulin, an antipodean palliative to Tanenhaus if ever there were one; you can listen to his approach to editing on The Bat Segundo Show #43)? Or does it really boil down to a humorless dictatorial swagger?

Incidentally, on a lark, I emailed the agency that issued the press release, as Sam Tanenhaus was declared “available for interview on the best books for any summer reading list.” Of course, I’ve made my interview requests before, and they have been declined. But if anything turns up, I will let you know.

But it really boils down to this: Is Tanenhaus man enough to respond to the charges leveled at him? I think not. He may be “under no obligation to acknowledge the brownie,” but a real man wouldn’t sulk like a veteran Quaker and cling to a dying homestead amid anni mirabiles.

So once again, I offer Mr. Tanenhaus the opportunity to engage in a conversation, to present his points and square off on this issues raised here (and many other places).

If he’s man enough, that is.

[UPDATE: Sam Tanenhaus has again declined an interview request with me. But I may be talking with Dwight Garner, the NYTBR senior editor. Perhaps Tanenhaus’s underlings are more man than Sam?]