Tonight, a modest group of people gathered at the Booksmith to catch Seth Greenland, on a book tour for his scathing Hollywood novel, The Bones. The Bones depicts a comedian at the end of his rope contending with the hollow banalities of the television industry. Greenland wrote the novel, his literary debut, because he hated the duplicities of show business. Remarkably, the book has done well in Los Angeles. Greenland suggets that this might be because Hollywood likes to see “its poor self-image confirmed by an external source.” 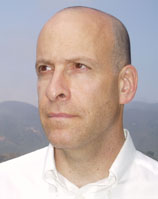 Greenland, 49, is a tall man, clad in a black shirt slightly tightened around his lanky frame. A thatch of thinning black hair adorns the top of his uncannily ellipitical head. His face is a vertical edifice offset by a bulbous, somewhat aquiline nose, lined with sunken black eyes that have clearly observed the Hollywood abattoir too many times. As he reads in a raspy voice, somewhat reminiscent of Howard Hawks’ trademark machine gun delivery, he annotates the L.A. references for San Franciscans. Little Dolphins Montessori School, for example, is seen as Tiny Tuna in the novel. And as Greenland is quick to note, fifteen people have seen themselves in the same character. Despite the warm reception (the book has been out a few weeks), Greenland openly wonders if he’ll be as vilified as Truman Capote was for Answered Prayers.

While Greenland is a somewhat intense man, one observes his token smirk of amusement, the telltale impish sign of a comedy writer. When the crowd laughs, his wispy eyebrows arch up, followed by a slight lift of his cheeks and the grin of a man who has, in his own words, used this novel as a surrogate for therapy.

“I don’t have the patience for psychotherapy,” he says.

Before he emerged a novelist, Greenland had authored five plays. When the theatrical atmosphere proved as notes-happy as Hollywood, he figured he could leave New York and get the same relentless criticism, but with a pecuniary shot in the arm to support his family. He turned out the Dr. Dre film Who’s the Man? and wrote for an unspecified HBO series.

Little did he realize that the kinds of movies he wanted to see (which included a script about a suburban dad trying to kill a neo-Nazi in the neighborhood as a nobel act, what he described as a cross between Crime and Punishment and Dilbert) would be sent into the no man’s land of turnaround.

“Most comedy writers don’t want to be writers,” he says. “They want to be in show business.” Angry and frustrated by Hollywood, he turned to writing The Bones. The novel came out of him in one mad rush over six months, with only the final 60 pages undergoing significant revision. He felt changed as a person.

Greenland took some time to lambaste the writer’s assistant on Friends who recently sued for sexual harassment, noting that getting killed and shot down in the most hostile manner imaginable is all part of the business. He says that, as much as it breaks his heart, theatre has moved into the realm of poetry: a necessary but ignored art.

Then there’s the unexpected bonus of The Bones being turned into a movie. He sent the book out to several people, including David Mamet. Mamet really liked the book, but didn’t get back to him until months later. Suddenly, Greenland received a call, “Hi Seth! It’s Dave Mamet. Did you get my email?” Mamet, on the phone with Sony honcho John Calley, wanted to turn the book into a movie and asked if Greenland could fly out the next morning.

Bemoaning another ill-fated run-in with Hollywood, Greenland brazenly declared (to David Mamet, no less) that he would only do the movie if he would write the screenplay. To Greenland’s astonishment, Mamet and Calley said okay. Now Greenland’s writing the script and working on his second novel (“much shorter than the first”).

Channeling Pacino, Greenland concludes, “Just when I thought I got out, they pulled me back in.”