It was a preternaturally sunny afternoon in the City. But that didn’t stop Scott and me from checking out Tayari Jones at A Clean, Well-Lighted Place for Books. Jones, who initially attracted my attention when I learned that her next-door neighbor was Richard Powers, was there for the final stop on her book tour to support her second novel, The Untelling. Told from the perspective of a young girl who copes with the effects of a car accident on a broken family in Atlanta, Jones started the novel almost immediately after her first novel, Leaving Atlanta. 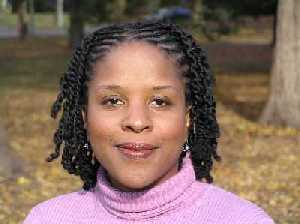 Jones, who is 34, read two passages from the book: the first segment setting up the family in question and the second involving a revelation on Halloween night. She read in a warm and mellifluous voice that evoked the purity of childhood and young adulthood covered within the novel (and wasn’t bad at all for a first book tour out). JOnes had recently rebounded from a two-week bout with laryngitis. Apparently, she had been conducting her readings without drinking any water. When she was kind enough to sign my book to “Ed the Champion,” I urged Jones to drink more water while on the road.

Jones started writing The Untelling in 2000. It took three and a half years to finish, with the last fifty pages coming out of her during the last year. The novel emerged when she started thinking about home ownership, specifically with the often unspoken issue of single women assuming “house power.” Jones was curious about how families assume multiple debts to take on a house. Since she had turned thirty near the beginning of writing The Untelling, these thoughts, along with the marital ambition that often plagues people around twenty-nine, had her focusing her instincts into her novel. She pointed out that marriage often prevents people from asking about parents, because a married person, when asked about her life, can simply point to her spouse and avoid the question of parents and siblings altogether.

Jones said that she is working on a third novel “about bigamy” and didn’t reveal much. But she did point out that in order for bigamy to work, one family would have to be complicit.

Lauren Cerand has informed me that Jones has an opinion piece in the Atlanta Journal-Constitution about writing her first novel.