THE PRESIDENT: Good morning. Laura and I were greatly inconvenienced by all this talk of generosity. You see, we could care less about this tsunami mess. We’re busy fighting a war. Can’t you leave us alone?

Nevertheless, there were 60,000 people or so who lost their lives and the last thing we want to do is send you mexed missages. I won’t even try to pronounce “Sri Lanka.” I spent three hours this morning trying to wrap that damn three-letter word around my tongue and failed miserably.

So let’s just say that our prayers go out to the people who had to pay for their passports. We apologize for the inconvenience. This country is committed to spending the next four years searching for its heart and its soul. Our embassies are having a grand old time, coming back to the homeland in their first-class passenger seats in time for the Haliburton new year’s party. I understand there will be ribs. 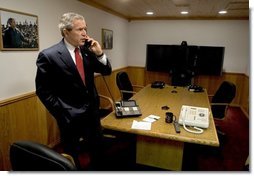 This morning, I spoke with the leaders of India, the nation that ends with Lanka, Thailand (where I told them to stop with the pad stuff, which is too spicy for a Texan’s stomach) and Indonesia, and expressed my condolences while trying to suppress my own personal laughter. And if you don’t believe how manly I was or that I actually made these telephone calls, I invite you to look at this picture. Do you see how in command I am? There are not one, but two phones on the table. And there are some papers too that I’m using to get that whole Lanka thing down. You see? I’m presidential.

Make no mistake: the tsunamis are either for us or against us. Through federal matching funds and the cutting of one $20 million plane, we have upped our figure to $35 million in aid to deal with this thing. (And besides, we’re too busy spending $40 million on my second inauguration.) Why, that’s enough to give these nations 35 million Popsicles. And that’s a good thing. Because when I was a boy, a Popsicle really brightened my day. And these people sure need bright’ning.

It’s hard work. Secretary Powell is working very hard. And we know that the other countries are working very hard. But when people are working very hard, it’s difficult to send a wire transfer. But we need to clamp down on our budgets and let the world know that, even when we deliver a chump change contribution, this tsunami conflict is about us. We are the most generous nation in the world. We have evidence that links the tsunamis to weapons of mass destruction. And we will prevail.