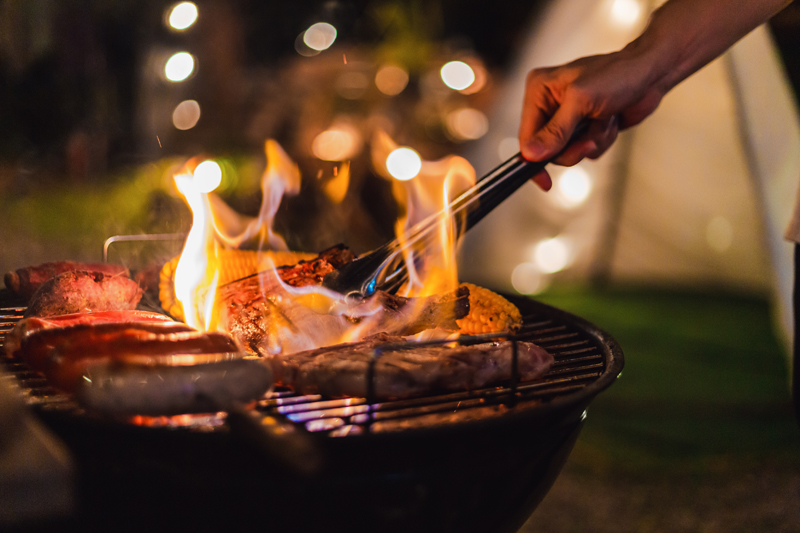 We’ve just released our latest episode of The Gray Area, This is the first of a four-part extravaganza that involves barbeques, demons, and the very Gray Area itself!

We just released the first part of our four-part Season 2 finale, “Pattern Language.” This is the third of six new episodes that we are releasing biweekly this summer, representing “Phase III” of the second season. This story is part of the second season of The Gray Area. You can follow the overarching story through this episode guide.

(In addition, we also received an NYFA grant to put on a live show, which will be staged sometime in the early fall. The show will take place somewhere between Seasons 2 and 3, will be free to the public, and will feature numerous members of our remarkably talented cast.)

Pat Goras and Lucy Didas are a happy couple living in a fantastical suburban realm preparing for a delightful dragon brisket barbeque with their neighbors. But when a strange portal opens in their backyard, their lives and roles become permanently altered within the very Gray Area itself! (Running time: 20 minutes, 54 seconds)

Sound design, editing, engineering, and mastering by a bald man in Brooklyn who once considered reciting Dr. Seuss’s Green Eggs and Ham in Latin.

Now working on a draft of the Season 2 finale! #writing #dragon #barbeque #fantasy

Pardon my laughter, but @glassmanegerie always cracks me up, so much so that I often end my recording sessions with him with a pain in my chest from holding in my laughter (because you can't get this on tape!). This afternoon, the Receptionist returned to record lines for the season finale. Here, Zack turned my goofy dialogue about beer pong into something strangely poetic. This role continues to become more complicated and it's all thanks to the fun exuberant nuances that Zack brings here. Thank you, Zack! #audiodrama #acting #recording #voiceover #character #poetry #beerpong #salmon #metaphor #actors #comedy #laughter