Bizarro fiction, an exciting genre devoted to “high weirdness” and a sense of fun, has eluded the frightened editors humorlessly holding the keys to their fragile literary castles. But it remains very much a prolific force, written and read by people who still possess a sense of glee about books and taken up by the good folks at Eraserhead Press, which has published such titles as Ass Goblins of Auschwitz, Shatnerquake, and Rampaging Fuckers of Everything on the Crazy Shitting Planet of the Vomit Atmosphere.

I had intended to investigate this phenomenon in depth. But Patrick Wensink, author of Sex Dungeon for Sale!, beat me to the punch, sending me his book of short stories, making me laugh, and graciously consenting to a suitably bizarro interview by email. 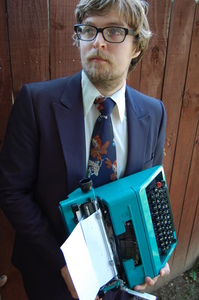 There seems to be this false belief that the world can be united by Coca-Cola (think Haskell Wexler selling out with that dreadful 1971 commercial) or other consumerist impulses. Practitioners of bizarro fiction, such as yourself, are more committed to the idea of literature as fun. How then can bizarro fiction change the world or resist these marketing forces? How might your own fiction change the world? Is the re-appropriation of culture part of the answer? Aren’t you essentially giving into these crass marketing forces by subverting them?

Haskell Wexler directed a Coke commercial? Medium Cool is one of my favorite movies. That doesn’t make me want a can of Coke, but now I’m curious as all hell to see this.

I think that’s a great point, that Bizarro Fiction like Sex Dungeon for Sale! attempts to bring fun into literature. I personally take a lot of care and effort into making sure I’m not just cracking jokes all the time, but wrapping the humor in stories that can also be appreciated as good writing. Eraserhead has a great history of providing surprises and fun with its books, whether its a story told from the perspective of a man being eaten by a bear, a book where all of William Shatner’s television and movie roles come to life or, with my book, where you get an optimistic real estate agent trying to sell a home with a sex dungeon. Hopefully readers are finding something they can’t get anywhere else and hopefully they come back for a second helping.

The editorial note at the beginning of the book suggests that if you don’t sell enough books through Eraserhead Press, you will never be published by them again. This seems an extraordinarily harsh proviso. Has Kevin L. Donihe, to the best of your knowledge, raped a close friend or killed an animal? Please provide suitable evidence for your answer.

Kevin Donihe is from Tennessee, so the chances that he’s killed an animal are ridiculously high. I think everyone from that state has a little Davy Crockett magic in their blood.

I don’t think Eraserhead’s approach to new authors is harsh. I think it’s a great idea, since the book industry is so harsh toward unpublished writers anyway. Eraserhead’s thinking isn’t unlike a father telling his son he needs to get good grades or he can’t borrow the car. Eraserhead has a big, fast, strangely-colored car with a roomy back seat, and I’d like to use it for a date next Friday, if possible.

“My Son Thinks He’s French” ends on a moment of transformation and incest. When did you first notice pubic hair? And do you find early puberty to be a greater threat against our national welfare than poverty and the disparity between the rich and the poor? Additionally, why didn’t this story include the word “freedom” within its prose?

I was actually just having a conversation about when I first noticed the short and curlies. By my estimate, it was sometime between my 10th and 30th birthdays.

You hit the nail on the head. “My Son Thinks He’s French” features no use of the word “freedom”. This is my little way of locking arms with the French people. I was recently in France, they make the best pastries in the world, how can anyone not approve? Does the congressional cafeteria still call its ‘taters “Freedom Fries”? I can’t get behind that, though I would support changing the name of Larry Bird’s hometown to “Freedom Lick, Indiana”, because, let’s face it, Indiana can use all the razz-ma-tazz it can get.

In “Wash, Rinse, Repeat,” Carl Dumford has “his words smear[ing] into long strings of vowels.” Yet his dialogue includes numerous consonants. How do you account for this discrepancy? And how does one apply two-ply to everyday vernacular?

Damn it! Somebody is getting fired. As you know, Ed, writing short stories for an independent publishing house is one of the most lucrative professions in America. It’s right up there with being a Fortune 500 CEO or one of those kids in High School Musical. So, this lifestyle allows me to employ an army of researchers, fact-checkers, copy editors, personal assistants and manicurists. Checking out discrepancies like this one is somebody’s job around here at Wentastic Enterprises and it sure as hell isn’t mine. Heads will roll, I promise.

I was alarmed by your use of boldface in “Chicken Soup for the Kidnapper’s Soul” and “Donor 322.” How do you soothe readers who might be alarmed by your energetic text formatting?

Bold type is a natural part of life, folks. Just like pubic hair, it’s not something we can hide our children from forever. People should not be ashamed of their use of boldface. By employing this popular writing technique I am coming out and encouraging others to follow my lead. I’m the Neil Armstrong of boldface type! Change your Facebook status, ladies and gentlemen, let everybody know you use boldface type and are not ashamed.

In “Donor 322,” you write, “Vomit surges across my body in waves.” This might be interpreted one of two ways: either unseen specialists are regurgitating upon the protagonist, possibly suffusing his body with the fresh chunks of last night’s dinner, or the vomit in question has adopted a sound wave pattern. Did you consult any oceanographers for this sentence? Are you a musical man? Are there nefarious individuals in Louisville, KY committed to the first proposition?

I don’t know about other people, but I went to college. And while I was there, I drank a lot of beer. And many times, after drinking this beer, I saw vomit do things I never imagined possible. I like to think that line is up for interpretation, depending on how much beer the reader drank in college.

In “Jesus Toast,” I sense a great deal of hostility towards post-structuralist types who wish to see patterns that do not exist. Have you been recently victimized by savage deconstructionists? Is this story your way of expressing a desire to organize a vigilante mob to tar and feather overzealous academics?

Before Sex Dungeon for Sale! was published I was rejected by over ten MFA programs. This made me very bitter for a long time. So, yes, there is a subliminal message buried in “Jesus Toast” that is encouraging people to tar and feather academia. If you hold it up to a mirror, you’ll also find an application form to have me tar and feather the academic of your choice for the low, low price of $19.95+tax.

When I read “Pandemic Jones,” Paul Reiser’s voice entered my head. I looked around, wondering if Resier was standing next to me, pounding away at Helen Hunt and Staci Keanan and screaming at Larry David to provide the anal plug. But he was not there. And I didn’t know how my pants had been unbuttoned. Have you had any direct communications with Mr. Resier? Have you had any sexual fantasies involving Mr. Reiser? By naming a pharmaceutical company after Mr. Reiser, do you feel that Mr. Reiser’s failure to engage with the American public in a dangerous way has been corrected?

Once, a few Christmases ago, I was feeling benevolent and gave my army of researchers, fact-checkers, copy editors, assistants and manicurists the day off. This forced me to actually do my own research for once. And you know what I found out? People love Paul Reiser. He’s the American equivalent of David Hasselhoff in Germany. According to the numbers I crunched that evening, if I added 132% more Reiser into my writing, Sex Dungeon for Sale! would spread like Swine Flu. America loves its Reiser, I’m just providing a public service.

“Me and Gerardo Down by the Schoolyard” offers a reasonable explanation for the disappearance of EMF and Jesus Jones. But how did you arrive at the economic value for doo-rags?

Wentastic Enterprises holds the patent for a machine that calculates the economic worth of doo-rags. It takes a snapshot of fluctuating factors, such as the price of cotton used for doo-rag production, the popularity of motorcycle gangs, astrological location of doo-rag friendly planets and how many bald dudes are trying to hide their scalp from the sun. Additionally, the recent Olympic medal victories of doo-rag enthusiast Apollo Anton Ohno has caused this machine to start working overtime. Expect a full report in the final quarter of 2010.

Has your wife taken a shine to Javier?

She has. I have the black eye to prove it.