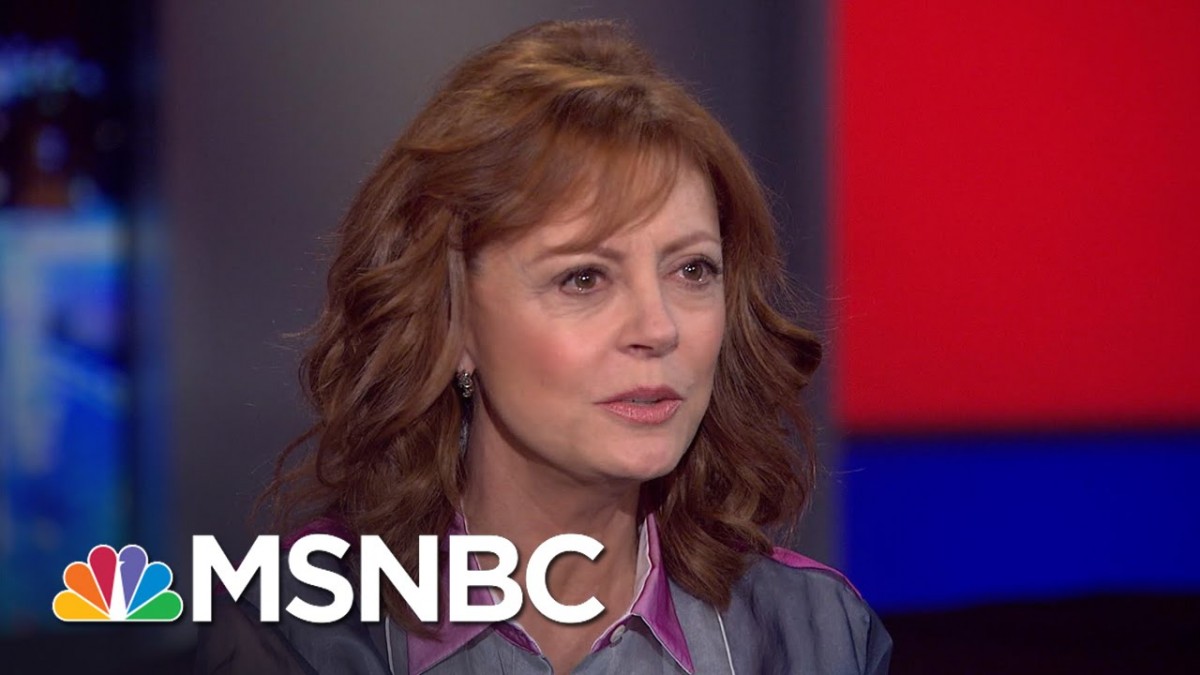 Susan Sarandon’s recent remarks on “revolution” have been distorted by a terrified cadre of pro-Hillary media types that have willfully overlooked important observations about how to rectify a broken system.

If you learned about Susan Sarandon’s remarks on Monday night’s installment of All In from a sensationalist Slate article written by Michelle Goldberg, you might have believed that the famed actress and lifelong progressive had called for balaclava-wearing Bernie Sanders supporters to throw Molotovs and overturn burning cars on live television. You might have believed that Sarandon had willfully aligned herself with the #NeverHillary campaign recently launched by Karl Rove’s super-PAC, basking in the prospective anarchy from a clueless tableau of Hollywood privilege. But after seeing Chris Hayes’s interview with Sarandon, I was stunned not so much by Sarandon’s remarks, which were observational and pragmatic and hardly evocative of Yippies levitating the Pentagon, but by the way in which Sarandon’s thoughtfulness had been so deliberately mangled by a “journalist” who had announced, only one month before, that she would be voting for Hillary Clinton.

Goldberg painted Sarandon as “a rich white celebrity with nothing on the line” and insinuated that she was part of a group of “posturing radicals on social media who pretend Clinton would be no better than Trump.” But Goldberg’s superficial remarks failed to fairly and accurately represent the far more important dialogue about what electing a compromise candidate to the White House really means. Can’t one have doubts about Hillary Clinton as President even as one simultaneously recognizes the threat of Trump? Why should such a position be shocking?

It was Chris Hayes who transformed the Sanders/Sarandon notion of revolution into “Leninist” with his leading question, not Sarandon. And it was Goldberg, cavalierly cleaving to Hayes’s framing, who trotted out the wholly inapplicable Ernst Thälmann parallel used so frequently to illustrate how German progressives failed to unite to stop Hitler’s election as Chancellor. Never mind that the German election of 1933 did not involve a two party election and that, should Hillary clinch the nomination, it is doubtful at this point that any Bull Moose-style third party will emerge to reproduce these conditions.

As Orwell once wrote, “During times of universal deceit, telling the truth becomes a revolutionary act.” And the truth Sarandon was telling involved how income inequality, the erosion of the middle class, and the failure of career politicians lacking the spine to sign on for the Fight for $15, have caused a not inconsiderable number of Americans to place their stock in outsiders like Trump and Sanders. As I argued in December, one doesn’t have to be a Jacobin subscriber to comprehend that this is a perfectly natural response to an establishment that has failed to rectify serious injustices in any substantial way. We are living in circumstances that call for far more drastic progressive action than the Democratic status quo. This isn’t even that “revolutionary” of an idea, but it is revolutionary by weak-kneed American political standards. And if this quieter form of American “revolution,” which has been seen quite prominently with young voters flocking in droves to Bernie Sanders, is delayed this election cycle, then perhaps there is a stronger likelihood of a revolutionary front emerging after the atavistic horrors of a potential Trump presidency. That’s how revolutions work, you see. They revolt against an establishment. They don’t even have to be that extreme. But Chris Hayes and Michelle Goldberg refused to entertain these fine distinctions. For all their pro-Hillary pragmatism, they couldn’t seem to understand that you could play a comparable long game as a revolutionary.

Here is the pertinent transcript from the interview:

HAYES: Right, but isn’t the question always in an election about choices, right. I mean, I think a lot of people think to themselves well if it’s Donald Trump and Hillary Clinton, and I think Bernie Sanders probably would think this…

SARANDON: I think Bernie probably would encourage people because he doesn’t have any ego in this thing. But I think a lot of people are, “Sorry, I just can’t bring myself to do that.”

HAYES: How about you personally?

SARANDON: I don’t know. I’m going to see what happens.

HAYES: I…I cannot believe that as you’re watching the, that Donald Trump…

SARANDON: Some people feel Donald Trump will bring the revolution immediately. If he gets in, then things will really, you know, explode.

SARANDON: I think that what’s going on now — if you think it’s pragmatic to shore up the status quo right now, then you’re not in touch with the status quo. The statue quo is not working, and I think it’s dangerous to think that we can continue the way we are with the militarized police force, with privatized prisons, with the death penalty, with the low minimum wage, with threats to women’s rights, and think that you can’t do something huge to turn that around. Because the country is not in good shape. If you’re in the middle class, it’s disappearing.

And you look, if you want to go see Michael Moore’s documentary, you’ll see it’s pretty funny the way they describe it. But you’ll see that health care and education in all these other countries, we’ve been told for so long that it’s impossible.

SARANDON: It’s like we’ve been in this bad relationship and now we have to break up with the guy ’cause we realize we’re worth it. We should have these things. We have to stop prioritizing war. And I don’t like the fact she talks about Henry Kissinger as being her goto guy, for the stuff that’s happened in Libya and other things I don’t think is good.

“I don’t know.” Not #neverhillary. “I’m going to see what happens.” A reasonable statement given that the final election is still a little less than eight months away and that there is still plenty of time to deliberate. “Dangerous.” The idea of even remotely considering how our present system isn’t good enough to help out the working and the middle classes, even under a Hillary Clinton administration, and using the probability of a Trump presidency to consider future momentum.

This really shouldn’t be that shocking. Thomas Frank’s recent book, Listen, Liberal, of which I will have more to say about in a forthcoming dispatch, doesn’t mention Bernie Sanders at all, but points to several examples of Presidents Bill Clinton and Barack Obama failing to honor the needs of the working class and willfully distancing themselves from the New Deal. It is no great secret that the last three decades of mainstream Democratic politics have been less about providing a safety net for hard-working Americans and more about enforcing conditions in which they will have to go into debt and willfully acquiesce to an unchecked plutocracy. And it is shameful that any criticism or uncertainty expressed about this Faustian bargain, which uproots lives and diminishes American potential, is now considered by apparatchiks like Goldberg to be akin to pissing in the pool.

I get it. The 2016 presidential election has become so preposterously cartoonish that it almost seems as if Donald Trump will soon act out grotesque scenes from Pasolini’s Salò before an appreciative crowd. Trump is a highly frightening individual who believes the Geneva Convention to be a problem and who seriously suggested that women should be punished for abortion, statements that were so unthinkingly extreme that two pro-life groups issued statements denouncing Trump’s comments. It is enough for any sane and rational individual to clamber inside her own shell, pointing to the problematic Kissinger pal going out of her way to tone down hard truths as the lover you’ll settle for.

Let’s talk about the “gormless unreality” of Senator Elizabeth Warren hitting the Senate floor denouncing oligarchy, corruption, and Citizens United. Or how Los Angeles has led the charge to raise minimum wage, causing California Governor Jerry Brown to propose similar reform at the state level. Or the nonpartisan efforts of Rootstrikers calling for Wall Street reform. Or how the Sanders campaign learned important lessons from Occupy Wall Street on how to build a movement.

These are developments that allow any progressive to maintain some lingering faith in a feral political system and that demand higher dialogue, not clickbait snipers distorting and demeaning radical ideas for a paycheck.