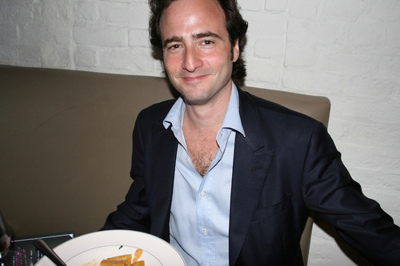 Ten years from now, we’ll all be inured to David Kamp. A whole generation will have grown up as his book, The United States of Arugula, has been long forgotten — the remaining copies pulped or perhaps used as oversized skeet shooting pellets, because they couldn’t even sell as remainders. For what imagination can one expect from a hack writer whose grand contributions to letters include The Food Snob’s Dictionary, The Film Snob’s Dictionary, The Rock Snob’s Dictionary, and The Wine Snob’s Dictionary? (One senses a trend. A writer so content to plant the word “snob” to his contributions in four different terrains, even satirically, must truly be an insufferable asshole.)

Right now, this great parvenu David Kamp has turned the prick of his pen to blogs. Using the finest epithets that 1999 had to offer, Kamp rails against the “untamed blogosphere” and the “Wild Web.” He displays his considerable ignorance in suggesting that the Smoking Gun is merely a place “best known for the documents it unearths via the Freedom of Information Act,” failing to understand that it was indeed the Smoking Gun that broke the James Frey scandal. This was the kind of lengthy investigative journalism that the New York Times once practiced, before it turned its resources to the women who New York governors were schtupping. (There’s also this neat little thing called the Internet Archive! Wow! That’s even better than the brand new 56k modem I bought last month from a guy on the street who said that it was “cutting edge.”)

He is content to cast aspersions about specific blogs based entirely on their titles (“cutesie-poo,” “mock-suave,” et al.), without bothering to cite any specific examples as to how the content lives up to these modifiers. (Look, I think the name “David Kamp” sounds like some cult member waiting for the big day when his shaky pyrotechnics knowledge will be enlisted in the jihad, or, failing that, the sad and klutzy moment when he accidentally blows off his hands and it’s all settled up as a dutiful sacrifice to The Leader. But you won’t see me belittling the man’s three syllables. Particularly when his piss-poor argument is so patently ridiculous.)

Indeed, Kamp appears so deaf to the idea of text that he compares Sarah Boxer’s post-excerpt pages to Johnny Carson. In this age of Quark and word processors, Kamp can’t seem to wrap his head around the concept of text being read on an LCD screen and later transposed to book form. It’s certainly bad enough that Kamp can’t even get his medium right. But in citing Johnny Carson, a dead talk show host who has been rotting under the earth quite well for three years and who hasn’t aired on a regular basis in sixteen years, Kamp demonstrates that he is as culturally au courant as a Deadhead who doesn’t quite understand that Jerry Garcia’s fat ass has been long chewed up by the maggots.

In Kamp’s view, a blogger cannot just have an “esoteric interest.” He feels compelled to add the word “obsessive,” as if those who compose their words for a screen are no different from Branch Davidians. He is quick to tell us that “[i]n the case of the blogger Benjamin Zimmer, a linguistic anthropologist, it’s language that turns him on.” That reminds me of the case of the quantum physicist who was turned on by quantum physics. Or David Kamp, the dumbass book critic who was turned on by dumbass observations.

Of course, reading sections of a 368 page book — composed of speedy prose, no less — was “a chore” for poor David Kamp. Kamp doesn’t report if he’s ever done a day of hard labor in his life, something like working on a farm or in a warehouse that might offer a sufficient comparative basis. (I’ll take a wild guess: no.) He doesn’t say what or why. That, of course, would involve actual thought. He merely says that what David Byrne does on his blog is a thousand times better than what Momus does on his. When Kamp resorts to ratios like this, he demonstrates that the true soporific wonkery on display here is not found within blogs, but in Kamp’s utter failure to provide any substantive analysis.

Leafing through much of David Kamp’s indolent and hastily assembled review — lightweight thought, lack of curiosity, comic misfires, recountings of personal travail (i.e., the “chore”) — I was reminded less of a book review than of a dreary speech delivered by a doddering conspiracy theorist for a Rotary International chapter. Sure, you want to encourage the man. But you would never expect his ramblings to be published in The New York Times Book Review. Not without a team of editors to rival a junta. And even then, there’s the old adage about cooks and broth.

And who is Kamp to speculate about Boxer’s vacillating motivations in writing the book? Can’t Boxer change her mind?

A thoughtful, and even critical, review of blog writing is by no means a dreadful idea for a newspaper piece. But this particular review goes well beyond a missed opportunity. If the NYTBR has any good sense, it will have a team of security guards punch David Kamp in the face if he ever tries to set up a lunch meeting with Sam Tanenhaus or Dwight Garner again.