Diary of the Dead is going to split critics. The film snobs who can’t handle a populist movie with a brain will groan (as many did quite audibly at the screening I attended). The hard-core Romero fans looking for Savini-style gore will be disheartened by the film’s focus on the internal (although there is one glorious zombie moment involving a defibrillator). 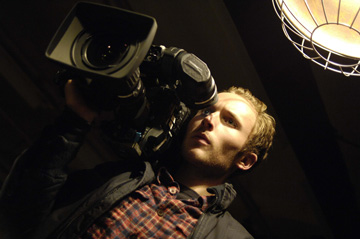 This is a pity, because Diary of the Dead is a gutsy and energetic film that believes in its audience more than Land of the Dead ever did. Romero made something of a mistake going to the big studios. He’s always been a more instinctive and playful filmmaker when working the indie turf. Land‘s blunt gas nozzle through the windshield has been replaced by more intriguing symbolism, such as a deaf Amish farmer now giddily grenading the dead and an overturned American flag hanging from a dormitory wall.

One of the film’s opening shots, taken from a television camera just as the dead are coming alive, is masterful satire. The camera zooms in on a driver chewing on a sandwich and crew voices mutter snarky comments over this private moment. A crew member asks an ambulance to move out of frame because it’s blocking the shot. Never mind that the camera is set up in front of a hospital. 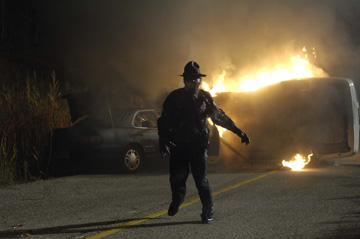 Told from the perspective of college filmmakers who see the (again unexplained) rising of the dead as an opportunity to record “a part of history,” Diary is a claustrophobic assault on media culture. “I just want to record it,” chants Jason Creed like a creed. He’s the director of the film-within-the-film, The Death of Death. And while his fellow students are initially uncomfortable, they become distressingly accustomed to having cameras in their faces. Some may decry the “amateur” acting, but when Romero has his actors mug for the camera, it’s symptomatic of a disease more pervasive than the zombies. At one point, just before entering an abandoned house, Creed tells his cadre to stop so that he can get a good wide angle shot. The voice of reason (so dissolute that he clings to a first edition of Dickens and seems, like Abigail’s Party‘s Laurence, more taken with the cover) is an alcoholic professor named Maxwell, named perhaps after the mathematician who proved that light was an electromagnetic wave and who thus made cinema and DV possible. Maxwell’s weapon of choice is not a gun, but a bow and arrow, which suggests that Romero’s affinity for chivalry — seen most prominently in his underrated film Knightriders — still holds.

Sharing a confined miasma similar to Day of the Dead, Diary champions cramped interiors over dystopic vistas. The only way of relating to fellow humans is through text messages and YouTube videos. The only real safety is a sealed panic room in a gated manor, a more socially isolating milieu than Dawn of the Dead‘s shopping mall. Its characters access the Internet not to check in on loved ones, but to upload footage. And why the need to promulgate information? As one of the filmmakers explains, “News is always horseshit. That’s how they sell soap.”

One gets the sense that Romero has been building up his fury for quite some time. His fiery stance suggests that an act of rebellion has less to do with improving human conditions and everything to do with seizing an alt-media fief. His characters prefer fully loaded cameras over the assurance of escape. “I can’t leave without the camera,” says Creed, who willfully keeps himself plugged into the wall to charge his battery while pals battle zombies. But Romero hasn’t quite abandoned his hippie idealism. The filmmakers find a number of National Guardsman — “all the folks without suntans” — who have holed up in one town with a stockpile. There’s a righteous and palliative solution to gentrification when the head points out, “We got the power,” and is even munificent with supplies when one of the students stands up to him. But in the face of chaos, honor, like all civilized tenets, goes south. Another faction shows up later, but its commander is wild-eyed and predatory, but still honorable enough to leave weapons. 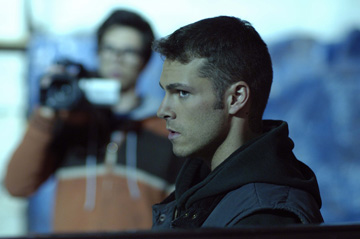 Adam Swica’s cinematography favors crisp and steely digital blues. The visuals remain cold and rampant even when a camera is shoved in the face of a young woman trying to remain calm after driving over a number of zombies. “How do you feel?” asks Creed, unable to discern the tangible trauma.

At times, Romero overplays his hand. While I could accept the double entendre of “shooting” that comes near the film’s finale, montages of catastrophe with Full Metal Jacket-style narration were unnecessary, particularly when nestled with such hokey lines as “It’s interesting what we find out what we’re capable of becoming.” One character even escapes with the line “Don’t mess with Texas” and needless musical accompaniment, an overly cornball tone at odds with the film’s more serious questions.

Nevertheless, Romero’s reboot (along with the forthcoming movie, The Signal) suggests that independent horror may very well be the only place where filmmakers are likely to kick against the hypocrisies of media. If Diary is not quite a masterpiece to rank up with Night or Dawn, it does signal a fantastic return to form.