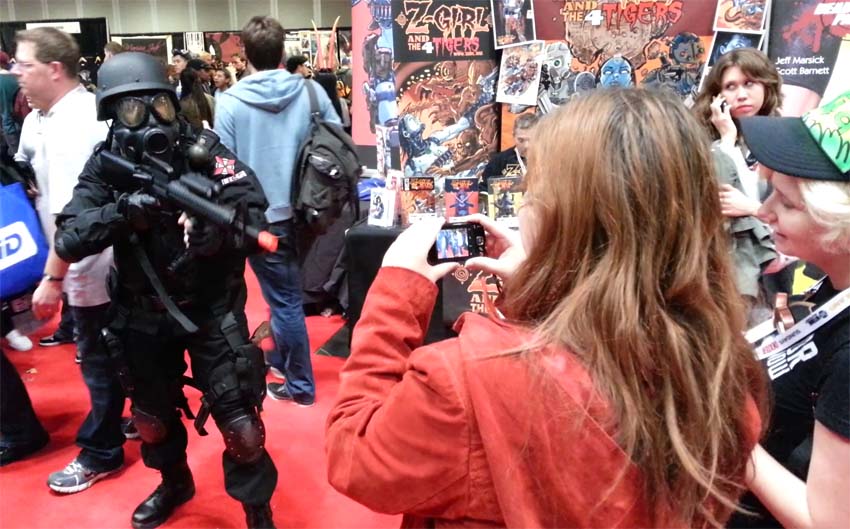 New York Comic Con has transformed into a three-ring commercial circus. What does this mean for fandom and the passionate people who attend it?

It wasn’t too too much of a surprise to see this year’s New York Comic Con transform into a three-ring commercial circus rivaling San Diego’s loud efforts to squeeze every last dollar from geeks. The fans were encouraged to spend money and take photos and stand in long lines and pay for overpriced food. Near the end of Saturday afternoon, it became difficult to walk up and down stairs. For that was the only place in Javits that people could sit outside of the basement food court. But the fans were kind and agreeable and good enough to answer my questions about their obsessions.

“I’m working for the company that’s selling these,” said Alex, an unapologetic fan of My Little Pony and Doctor Who. He pointed to a light blue shirt with the caption HANDS UP IF YOU LOVE STAR WARS. This was one of many shirts that Alex was spending the weekend hawking at a booth. “I got a job with them because I buy a lot of their shirts and they ended up asking me if I wanted to come to events.”

I couldn’t help but fixate on this connection between fandom and commercialism. I enjoyed talking with Alex. He told me he was a “computer nerd” who enjoyed playing video games and didn’t leave the house much, but he had another life working with kids afterschool. Why did his innocuous passion for Equestria have to be commodified? 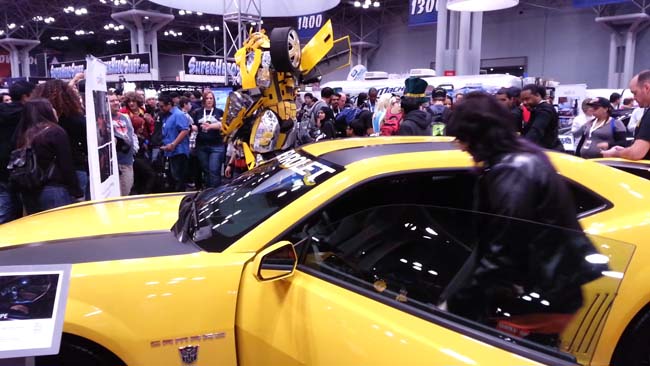 But there were much bigger companies hoping to hook geeks on the floor. I spent some time on Saturday morning hanging around Chevrolet’s massive patch on the Javits floor. There was a yellow robot behind all the cars, sealing the Hasbro/Michael Bay/Chevrolet trifecta. Apparently, the $1 billion gross that Transformers: Dark of the Moon had raked last year wasn’t enough. Chevy wanted more. And they had adopted a strategy of making some of the new lines less committed to miles per gallon or safe driving. Bluetooth, blasting Pandora, and hands-free calling were the new order of the day. They handed out free T-shirts, as car manufacturers are wont to do.

What surprised me was the the Camaro, which I had remembered as a muscle car. But a bright yellow Camaro had been rolled out for the Comic Con crowd. I had to talk with someone about this.

It took some time before Chevrolet could find a representative who was authorized to talk with me. This turned out to be a guy named Ara Eckel, who is listed as a “lead connected customer specialist” on Linkedin. Eckel told me that Chevrolet had started coming to Comic Con last year. “The biggest goal,” said Eckel, “is to put our technology in our vehicles that allows people to be more connected.” I must confess that this confused me, as there can be no greater connection to others than how you drive on the road.

Eckel said that the typical Comic Con goer could afford a car. He pointed to the Spark, a white, eco-friendly $14,000 automobile with “all the in-car technology that aligns specifically with the demographic of the individuals at Comic Con.” There were also “fully loaded vehicles” under the $20,000 mark surrounding Eckel and me.

This was all part of Chevrolet’s present efforts to change its image “and move towards a younger audience, as well as more technology and into-the-real-world audience.” The key words that Eckel bandied about were “digitally aware.” Eckel was convinced that young people were digitally aware and that Chevy drivers would “make their digital awareness part of their driving experience.” Hands-free calling would make young drivers “safer.” I told Eckel that I was concerned about digitally aware drivers getting into more collisions. “It’s hands free,” replied Eckel. 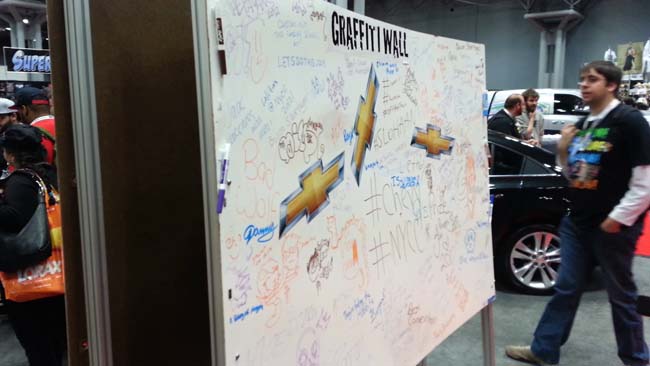 If “digitally aware” was the new Chevy formula, why then were young people fond of the analog? Shortly before I talked with Eckel, I had watched a shy young woman with bright orange hair etch a message on a graffiti wall adorned with several Chevy logos. Her passions were absorbed into the hard corporate sponge. I wondered if the graffiti wall would be analyzed by marketing experts and discussed in a boardroom. I wondered if its happy scrawlers were aware of this. I asked the young woman I could talk with her. She blushed. She offered a nervous laugh. She said that she didn’t have anything to say. 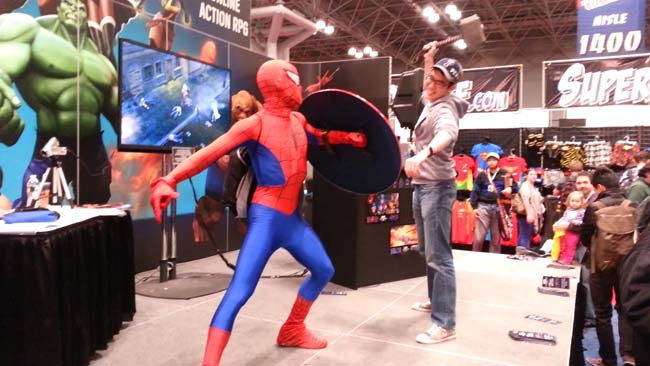 So why did people come to NYCC? Did they want to meet other people who shared their interests? Or was this show about gaping at spectacle? A video game company had a guy dressed up as Spider-Man performing moves on a dais, which amounted to holding up his shield while another guy hit him. I asked a young man if this was the kind of theater that would persuade him to purchase the game. He told me it wouldn’t. 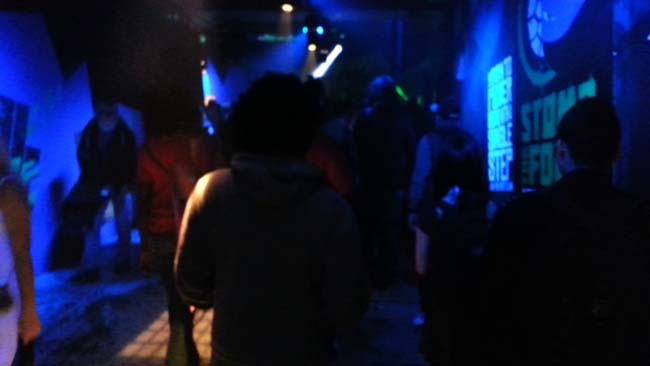 Families sauntered through corridors dolled up to pimp the newest iteration of the Teenage Mutant Ninja Turtles. Meet the new half-shell. Same as the old half-shell. Big deal. I remembered when the comic first come out. It was a funny idea, parodying Marvel and independents alike, that captured the collective imagination of schoolkids. We gushed about it as we sipped milk from our long thermos cups and dogged on the inferior Adolescent Radioactive Black Belt Hamsters which came not long after. You made friends through these nervous introverted whispers. The incessant curiosity led you to talk about other things. 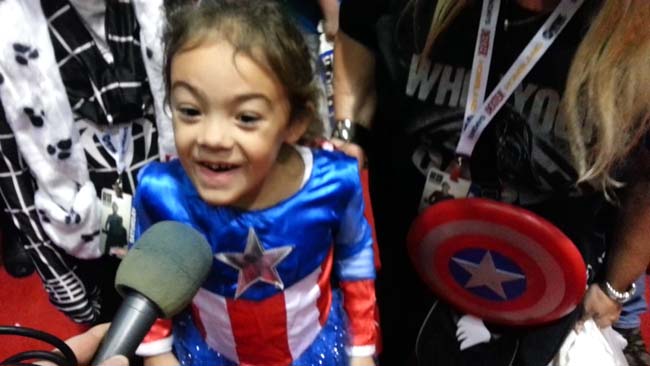 I talked with a little girl wearing a Captain America costume. She told me that Wonder Woman was her favorite superhero and was very eager to speak into the mike. I related to her incongruity. The whole point of warmth for an icon was to turn it on its head and see if anybody noticed. I found the little girl’s excitement and sense of wonder more stirring than the fans who followed some bearded actor from the hit TV series Supernatural, who seemed to relish walking the floor with escorts more than conversation. 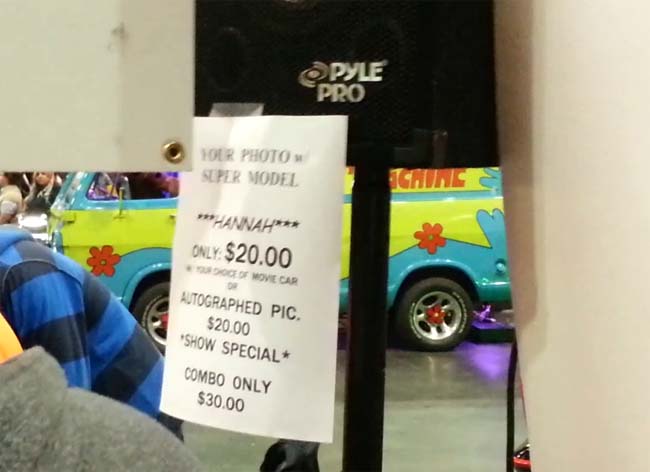 There was an area in the back in which the Mystery Machine from Scooby-Doo and the Delorean from Back to the Future and Batman’s 1966 Batcycle were parked behind a barrier. You had to pay if you wanted to get in.

You could walk almost anywhere and find signs informing fans that they had to pay anywhere from $20 to $30 for an autographed photo. I continued my peregrinations until I noticed one photo of a starlet’s ass spilling out of a string bikini. The starlet was a large enough draw to attract a long line of vaguely embarrassed men over thirty, many clutching the capes of their superhero uniforms not unlike men who sink inside their trenchcoats when they are ashamed of buying physical pornography. The time spent in line might be better spent talking with other people. The money spent on the autographed photo might have purchased a modest dinner for two. The peep shows and adult moviehouses at Times Square are gone, but that hasn’t stopped New York Comic Con from making a buck.