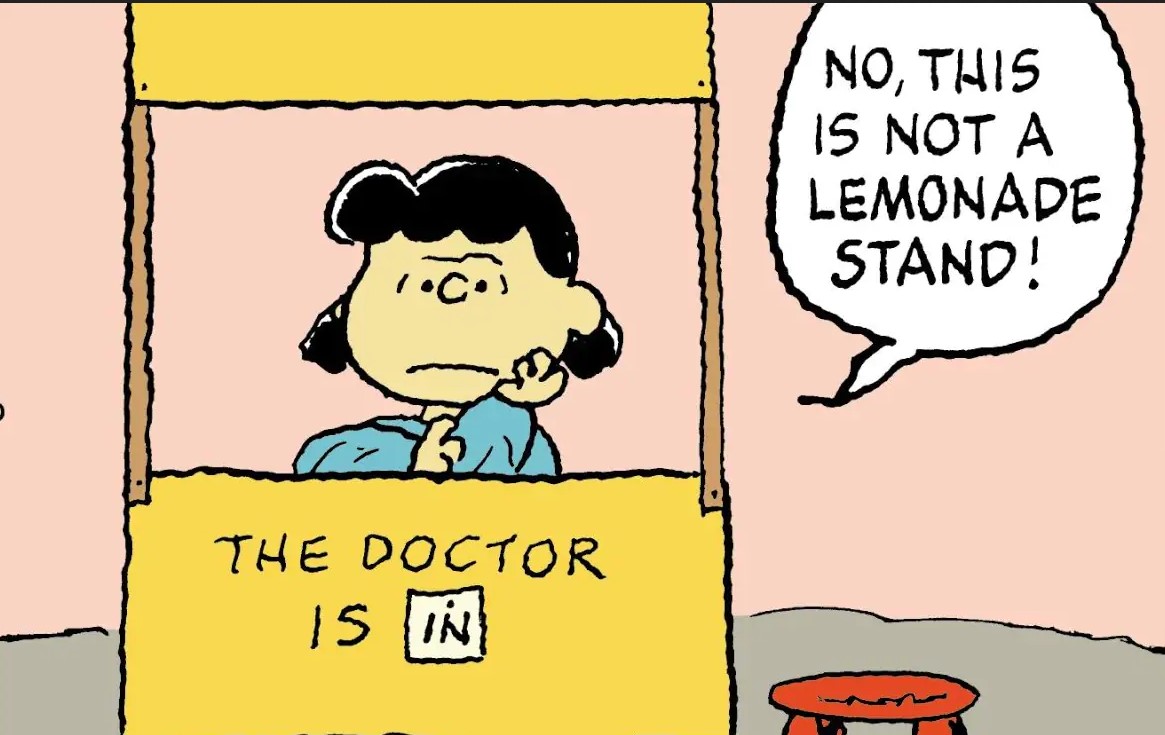 Setting up temperature stands in every neighborhood is an effective way to detect fever and flatten the curve.

You can’t find a thermometer anywhere. It took me three days to get two thermometers and I’m usually very resourceful. I mean, if I can’t find one fast, nobody can. Pharmacies and the stores are all cleaned out. If you try ordering a thermometer from Amazon, you’ll end up waiting a month for it to be delivered. And right now, as the Coronavirus escalates in the States, we really need a way to be able to detect it as early as possible. The early signs involve fever. And with COVID testing proving to be outside the grasp of anybody other than the affluent, the only real way for us to know if any of us may have it is to check our temperature. But if we don’t have the tools, then how can we know?

Enter the temperature stand, an idea inspired by Lucy’s lemonade stand in Charles Schultz’s Peanuts. Schultz had the right conceptual idea. What if a lemonade stand, which serves the community, were altered for medical purposes? What if we set up a network of temperature stands around the nation? Free temperature tests. No questions asked. Along with a few jokes and friendly banter just to make people feel safer and happier. The temple thermometer I have takes just three seconds to register that my body is running normally at 98.4. What if we enlisted volunteers to take the temperature of everyone in the neighborhood?

I really want to set up a temperature stand. I left the house today to talk with a pharmacy in my neighborhood about setting one up in front of their store. The pharmacy advised against it. So did a local cop. Why? Because there are now stringent edicts in place, along with a heavy police presence (many of the cops in my hood are wearing facemasks). So I can’t do this — even though I very much want to help people in my neighborhood. I’ve already started taking people’s temperature on the sly, dabbing my thermometer probe with a cotton ball soaked in alcohol immediately after. A guy at the bodega who comes into contact with perhaps a hundred people each day, grateful to know that he didn’t have a fever, offered me a free six pack of beer for doing him a solid. I politely declined. That’s not the way a temperature stand should work. Taking people’s temperature really should be free and ubiquitous. Think of this as a kind of healthcare volunteer squad, united by a common code rather than a common cold. It also feels incredibly strange to be an outlaw in the interest of public health. But, hey, if heading out into the city with a digital thermometer and a balacava and a secret name in the dead of night is the only way for me to help people, I’ll do it.

I’d set up a temperature stand it in a heartbeat, but I now know that I would be immediately shut down. Honestly, temperature stands make total sense. We need to be able to find and quarantine anyone who has a fever so that they don’t spread the virus.

I’m writing this quick dispatch to get this idea out there. To see if we can make something like this instantly happen.

Expert epidemiologists have informed us that the reported number of Coronavirus cases represents only a fraction of the total — perhaps as little as 13% of all cases. So it’s vital for us to have ways to collect data.

But if we have a way to take people’s temperatures, then we would stand a stronger chance of cutting down the number of cases. We’ll also have a way of flattening the curve while bringing our communities together.

So who’s with me? If we can’t keep a temperature stand in regular operation, then let us become masked avengers of the night — with a digital thermometer becoming the most valuable tool on our Batman utility belt!

I can tell you this much. I’m not leaving the house again without my thermometer. Not for me, but for other people. “I have a thermometer. Would you like me to take your temperature?” will now be added to my usual “Hello, how are you doing?” as long as we’re dealing with this pandemic. If you run into me, I’m more than happy to take your temperature.

The present wisdom being circulated — that the healthcare reform passed on Sunday night is “a step in the right direction” — blindly assumes that a public option bill rectifying HMO avarice (among other consolidations of power working against the commonweal) is forthcoming. It assumes that healthcare costs will remain the same between now and 2014 — the year in which all individuals who can’t get healthcare from their employers (including the unemployed, the self-employed, and those working for a business with less than 50 employees) will be required by law to purchase healthcare. (By 2016, those who fail to purchase healthcare will take either an annual tax hit of $695 or 2.5% of household income, whichever sum is greater.)

But the new legislation doesn’t require businesses with less than 50 employees to offer healthcare for its workers. Which means that, for these small businesses, the onus will fall upon the worker to bankroll her own healthcare. And while it is true that federal subsidies (i.e., affordability credits, which will run out in 2019, a little-observed issue among some progressives) will exist, through a graduated scale, to help any individual making less than $44,000 a year ($88,000 for a family of four) pay for her own insurance (at least over the course of a six year period), there remains an army of elephants in the room that nobody wants to talk about.

Beyond the misplaced definition of “neutralizing” industries identified by Glenn Greenwald, there’s the uncertain future of whether premiums can even be stabilized to fit a healthcare organization’s for-profit disposition. The Los Angeles Times‘s Duke Hefland couldn’t seem to get any prognostication from the experts. But if there’s anything just as certain as death and taxes, a for-profit corporation will find a way to make more money, stopping at nothing to squeeze out the vulnerable. While the bill does put a stop to the deadly practice of denying healthcare applicants coverage because of pre-existing conditions (this is arguably Sunday night’s greatest victory and the linchpin for greater progress), it doesn’t hold insurance companies accountable for escalating prices. There hasn’t been a National Insurance Rate Authority established (although Sen. Feinstein attempted to sneak one in), but there has been traction in getting the antitrust exemption removed. Still, the failure to establish an authority is especially problematic, considering that a health insurance company’s business model involves collecting from the healthy to pay for the unhealthy. And what is to stop an insurance company from jacking up premiums across the board (as Anthem notably did back in February)? What is to halt CEOs from collecting compensation? Will we see a legion of Nick Riverias offering cheap and possibly ineffectual insurance to help people purchase the mandated care? Time will tell. But many of these possibilities could have been avoided with a public option.

The Democrats were forced to make some serious concessions on these points. And their long-term strategy may involve a clever alliance. Since the responsibility for paying for healthcare now falls upon a large cluster of businesses, perhaps these businesses may align themselves with government against any premium spikes from the insurance industry. On the other hand, any potential alliance will inherently favor the corporation or the business with more than 50 employees.

Let’s say that you’re someone looking for a new job in 2014. You don’t have any savings. And you need to get a job. Because you don’t have any healthcare. And if you don’t get the healthcare, essential and vital as it may be, you’re going to be hit with hard financial penalties. Corporation A offers you a job for $40,000, which includes healthcare benefits. Meanwhile, Small Business B has made you a counteroffer of $42,000. But because Small Business B employs only ten workers, under these arrangements, you’d be forced to pay your own healthcare costs if you decided to take this job. So in order for you work for Small Business B, you’d need B to pay you about $5,000 more, so that you can purchase the federally required healthcare. But Small Business B can’t afford this. For Corporation A, which must pay for healthcare, and Small Business B, which doesn’t have to, there’s certainly a financial advantage to the small business. But the worker is going to opt for Corporation A. Because the employee is going to get less income after healthcare costs working with Small Business B than with Corporation A. Therefore, potential innovation that might emerge with the small business job is lost to the corporation. And I haven’t even begun to examine the impact on the self-employed — MJ Rose tweeted back to me last night her nightmarish escalation of costs — along with the abortion restrictions (followed by cries of “baby killer”).

A public option and a central insurance rate authority (along with a 21st century recognition of gender realities) would help to create affordable healthcare rates, work to rectify these imbalances, and begin the journey to a greater goal: universal health care that regular people can afford and, if they can’t, care that they can receive for free, without an IRS or an HMO invoice attached, and without the spoils going to private industry. That is the mark of a civilized nation. That is the true mark of progress. But maybe, just maybe, we’re on our way.