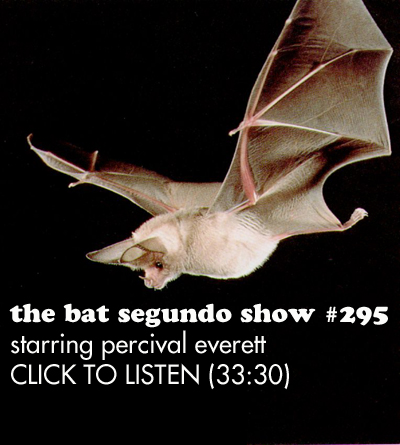 Percival Everett is most recently the author of I Am Not Sidney Poitier.

[For related links, check out Percival Everett Week over at Emerging Writers Network, as well as my specific thoughts about Everett’s most recent novel.]

Condition of Mr. Segundo: He is not Percival Everett.

Subjects Discussed: Name-related jokes, puns and internal metaphors, the many ways to pronounce “Le-a,” literal misunderstandings, whether there really is a Ted Turner, Bill Cosby’s Pound Cake speech, Richard Power’s Generosity, the relationship between reality and fiction, truth vs. reality, the “magic” of writing, stress, on not paying attention to the publishing industry, making the next book, not caring about the reader, on not writing commercial successes, the impulse to entertain, Everett’s world of Dionysus, reader reactions and interpretations, having no affection for previous books, becoming a better writer, the “experimental” nature of Wounded, outlandish one-dimensional figures and subdued prose, I Am Not Sidney Poitier as a “novel of ideas,” on not knowing how to write a novel, artistic creation and gleeful sabotage, narrative worlds and anarchy, Everett’s novels as concrete recreations, loving children geniuses and idiots alike, worldbuilding, subverting subjective character understanding, limitations, writing novels as a playground, having an interest in religion while remaining an “apath,” psychics for horses, believing with character belief, laundry list descriptions, strategic use of language, the relationship between story and language.

Correspondent: I recently read Richard Powers’s forthcoming novel, Generosity, which deals with the notion of what a novel really is and what ideas and characters really are. And I’m very curious to put this question to you. To what degree do you need reality to start from? And to what degree do you feel the need to be faithful to reality? Or even faithful to real-life figures? Or can you accept a Percival Everett figure in this who also happens to have a book called Erasure?

Everett: First, I owe nothing to reality. But, of course, for any novel to work, in spite of my disregard — maybe even my disdain for facts — truth is important. If it’s not true, you can’t stay with it. You won’t believe it. And there is no work. But truth has nothing to do with reality or facts.

Correspondent: But you do have names to draw from. Not just in this book, but also in your previous books. Thomas Jefferson, Strom Thurmond. You’re a guy who likes real names like this. And so, as such, I have to ask. Is it just a constant influx of information from newspapers that is your creative muse? Where do you stop from reality and start with the inventive process? Or the misunderstandings we’re talking about?

Everett: Well, it depends on the work. But I read all the time. So it just depends on what comes to me. Some figures just present themselves as too alluring to ignore. How could I go through my life and not at some point address Strom Thurmond? (laughs)

Correspondent: Yeah. Sure. But it can’t just be a simple impulse. Because obviously…

Everett: Sometimes I don’t have a plan. Sometimes it’s hit or miss. Trial or error. Feast or famine. All of those duals. I don’t know. For me, the way novels come together is magic. And I only question it so much.

Everett: Yeah, I suppose. Yeah. It won’t get done unless I do it. So I try to do it. And I don’t stress.

Correspondent: You don’t stress? Never stressed at all?

Everett: I try not to be. There’s no reason to get upset about anything. Especially work. And then it happens. And the more it happens, the less stressed I become.

In today’s Chicago Sun-Times, you can find my review of Percival Everett’s I Am Not Sidney Poitier. And it’s rather fitting that much of my review ended up as a list of rhetorical (and possibly unanswerable) questions.

As it so happens, just after filing the review and being wowed by the book, I learned that Everett happened to be in New York. And I was able to set up a rare interview with him (which will be airing as the next episode of The Bat Segundo Show, to be released very soon). Everett, who has avoided nearly every form of marketing for his books*, and who declared to me that he had no interest in the business of publishing or catering to an audience, identified his book as a “novel of ideas.” But I Am Not Sidney Poitier is also steeped in an old-fashioned sense of humor. Here’s a brief excerpt from the forthcoming Segundo installment, in which Everett explains the relationship between these two concepts:

Everett: There are no rules. I don’t believe in any rules when it comes to fiction. If I can make you believe it, then it’s fair game. Probably when I’m working, if I can make myself believe it, then it’s fair game. Because I don’t know what you’re going to believe. And it depends on the work. A novel like Not Sidney, where much of it is more a novel of ideas and the narrator is of a certain sort, can make bizarre perceptions or representations of the world and have the one-dimensional county of Peckerwood County. Whereas in other works, that simply wouldn’t work. So the work talks to me. The most important part of the story is the story. And I can’t impose my feelings or my desire to write a certain kind of thing that day on it.

Correspondent: But in identifying Not Sidney as a novel of ideas, I would argue — and this is where we get into needless taxonomy arguments. But I should point out that you are essentially saying, “Well, this is a novel of ideas.” And maybe the story itself will matter on some basic entertainment level.

Everett: Well, if I’ve done it right, you should believe in it entirely. And superimposed upon this is the narrator’s concept of this being a story of ideas. But you can’t have — and this is not a rule, but, for me, I cannot have a novel where the story is secondary to anything. The world has to exist. And so I have to make it. And I have to make it believable. How I do that can vary and come across in any different number of trajectories or strategies or whatever.

* — This may answer, in part, Gregory Leon Miller’s query this weekend on why Everett’s work hasn’t received the attention it deserves.