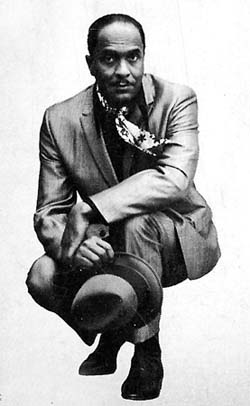 It’s the death day of Iceberg Slim, who passed away eighteen years ago on April 27, 1992. Iceberg Slim is not to be confused with iceberg lettuce (alive, but only for short periods and not exactly the best lettuce) or Vanilla Ice (alive, but often dead on stage). But it is safe to say, that Iceberg Slim was not born with this name. Few parents indeed would name their new children “Iceberg.” He was born in Chicago under the name “Robert Lee Maupin.” But please don’t confuse him with Armistead Maupin (also alive). Iceberg’s tales from the city, as portrayed in Pimp and Trick Baby, were decidedly less comfortable, often involving drugs in less salubrious situations. He spent his early years working as a pimp. He needed a name that would frighten people, that would sufficiently confirm his rep as a badass. So Iceberg arrived at his nom de plume for being “ice cold” — that is, sitting at a bar with cool equanimity after a bullet had pierced through his hat. He was later to impart this vocational advice: “to be a good pimp, you gotta be icy, cold like the inside of a dead-whore’s pussy.”

So Iceberg’s pre-writing career was built upon dodging death, which makes the (now dead) Iceberg especially suitable for The Dead Writer’s Almanac. He remained a pimp until the age of 42, serving several prison sentences during this period of gainful employment. During the last stretch, Iceberg was asked to “square up.” Upon seeing no obnoxious cowboy with a bullhorn and a phonograph asking him to stir the bucket, much less a pencil and a straight edge with which to sketch a quadrangle, Iceberg interpreted “square up” to mean (the previous two options not being common among his circles) taking up the pen.

He then moved to California and found some success writing books in the 1960s. (Pimp was often stacked next to Soul on Ice.) But when Iceberg met the Black Panthers, the Panthers expressed disdain for his former life. As he wrote in The Naked Soul of Iceberg Slim:

As I stood there chattering about the raid and my writings, I had the sobering realization that unlike the hundreds of non-Panther black youngsters who had recognized me on the street and admired me as a kind of folk hero, because of my lurid and sensational pimp background, the Panther youngsters were blind to my negative glamour and, in fact, expressed a polite disdain for my former profession and its phony flash of big cars, jewelry and clothes. Their only obsession seemed to be the freedom of black people.

I noticed a thin, light-complexioned, secretary-type Panther, with a sheaf of paper under his arm, silently scrutinizing me.

He stepped forward abruptly and with curly-lipped contempt said, “Nigger, you kicked black women in the ass for bread. How many you got now?”

But Iceberg had the last laugh. As the Black Panther Party faded in the subsequent decades, Iceberg maintained prominence, selling six million books before his death in 1992. Artists such as Ice Cube and Ice-T would find inspiration in his words and build hip-hop careers. But certain radio personalities in Minnesota, promoting a “literary” culture to unadventurous middlebrow listeners, would never mention his name, terrified of alienating an aging white bread audience.