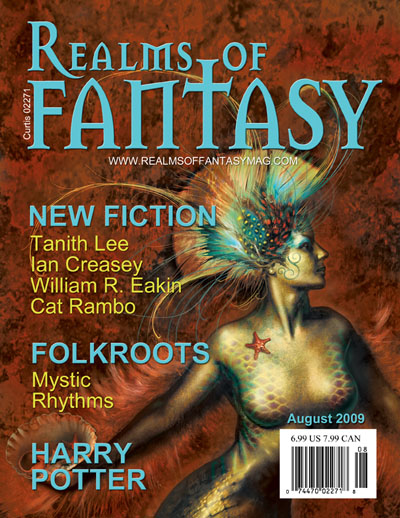 The cover for the Realms of Fantasy reboot (pictured at right) has generated a number of prissy blog posts from the likes of K. Tempest Bradford — truly inhabiting a teapot — and Jim C. Hines. The charge? Because the cover features a mermaid who has bared breasts, it is somehow sexist. Never mind that the image in question here does not present the mermaid as a sex object. (Surely a pair of extended gumdrop nipples, a sexist “Fuck me” pout, or some dreadful violation from a satyr would have done the trick. But the star on the mermaid’s right shoulder here is far more prominent than the mermaid’s scaly and subdued torso.)

The line of reasoning by these two sanctimonious pinheads is that, by featuring a topless mermaid, the magazine is, in the words of Hines, “worshipping at the Altar of Big Breasts.” This assumes, of course, that any human being who sees a Big Breast is going to immediately have sexual thoughts about it. But if the cover’s intent was mammary allure, then surely it has failed. For if the cover wanted to emphasize the breasts, certainly it would have made the glands in question ginormous. Never mind that the breasts being depicted here do not possess nipples, are asexual, and are completely occluded by the mermaid’s rather ridiculous New Wave haircut (truly deserving of the pitchforks!). Does one truly need to dredge up the many breasts that have appeared in numerous paintings, sculptures, and artistic representations over the course of human history? We’re in the 21st century.

What makes these protests any different from former Attorney General John Ashcroft installing blue drapes to cover the Spirit of Justice’s bare breasts at the Justice Department? Or those craven Christians who were “shocked” by Janet Jackson’s wardrobe malfunction a few years ago?

Are the numbskulls who object to the breast even aware of the women who have fought battles against Puritanitcal forces to breastfeed their children in public? Do they truly not understand how objecting to an artistic depiction featuring a breast is the equivalent of confessing in public that some realities are just so gravely offensive that it is necessary to shower with one’s clothes on?

Personally, I’m wondering if Bradford and Hines will direct their energies at the Venus de Milo. After all, that sculpture actually has nipples! Should some generous soul establish a fund that would send Bradford and Hines on a trip to Paris, where they could then furrow their dour and humorless brows in a manner reflecting the significance of their offenses, I would happily donate a few dollars, if only to see the French put these two Pollyannas rightfully in their place.