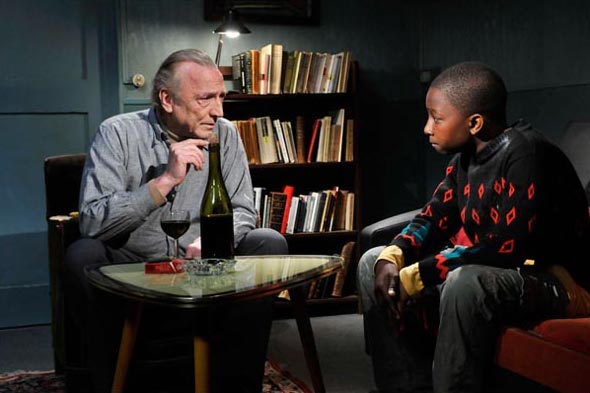 Aki Kaurismäki’s latest film tinkers with the idea that our fantasies are more rooted in our heart, existing before we can sculpt them into visual submission.

[This is the sixth in a series of dispatches relating to the 2011 New York Film Festival. All of Reluctant Habits’s NYFF posts can be located here.]

The one modest issue I’ve had with Jean-Pierre Jeunet’s more recent films (specifically, the ones he didn’t make with his former partner Marc Caro) is his revisionist aesthetic. Amélie is a well-crafted and moving portrayal of the world’s joys, but it comes at the expense of Jeunet’s team of eager geeks digitally erasing the Métro graffiti and anything remotely insalubrious. Micmacs is a great-looking celebration of misfits, but Jeunet required additional digital cleanup of Paris to meet the film’s ideological promise. Consider Elastic Girl, who performed much of her contortions without trickery, but required computers for her more physics-defying acts. You could argue that Jeunet was making a formalist argument that idealistic hopes come at a cost. If you want to maintain your sunny view of the human race, you’re going to have stop looking at the ugliness, perhaps erasing it from your life. Whether Jeunet will step up this moral argument for truly devastating effect in a future film is anyone’s guess.

But Aki Kaurismäki’s very charming Le Havre approaches this idea in the reverse, tinkering with the idea that our fantasies are more rooted in our heart, existing before we can sculpt them into visual submission. The film uses 20th century aesthetics and values to get at the 21st century French problem of immigration. It is populated by several graying humanists (many working-class), whose collective efforts to help a boy named Idrissa (Blondin Miguel) make it to London before the immigration authorities deport him, cause them to put aside their grievances with a shoeshiner for the greater good. Is this not a fantasy? Kaurismäki certainly suggests that it may be. His style, unlike Jeunet’s, feels more like an analog reconstruction from the guts of reality and other films, rather than one whitewashed by digital effects. When a couple talks out their past problems for a “trendy charity concert,” Kaurismäki raises a Sirkian spotlight as they reunite. The lush orchestral cue that follows sounds like something that might have accompanied Rock Hudson’s gentle gardener looking with longing towards Jane Wyman. Yet somehow this moment doesn’t feel kitschy, because Kaurismäki is careful to measure out his stylistic influences (Bresson, Melville, and more) without stifling the evolving life of his characters.

If humor is the true wisdom which unravels how we interact with each other, then it’s contained amply in Kaurismäki’s protagonist Marcel Marx (André Wilms), a one-time Bohemian who gave up his artistic ambitions to become a shoeshiner. Our early moments with Marcel -– accompanied by his fellow scrubber Chang (Quoc Dung Nguyen) –- see his gaze hitting the ground seeking fresh feet, acerbically remarking on an unexpected death, and contending with the cries of shoe store managers who tell him to get lost when he sets up shop outside, hoping to bag some foot traffic. It becomes clear that Marcel dearly loves his wife Arletty (Kati Outinen), who is suffering from some unknown ailment. Most of his hard-won money is confiscated not long after he walks through the front door. You might almost say that the Marx house is also a fantasy. Even accounting for French social programs, what struggling shoeshiner could afford this marvelous place? The house contains plentiful 20th century appliances, smooth hunter green walls, a welcoming picket fence, and a friendly dog.

But if this is a homespun fantasy, the fantasy also includes the tradeoffs of life. Arletty has to stay in the hospital, begging the doctor not to fess the affliction to her husband (the doctor asks if this means he’s a politician), and Marcel devotes his attentions to helping Idrissa. This becomes a purely altruistic concern: Marcel mines from his hard-earned savings and even visits one of Idrissa’s relatives in Calais. Yet the hysteria surrounding the missing boy is almost phantasmagorical (a newspaper headline shouts that the immigrants may be part of al-Qaeda), leading one to wonder where the reality ends and the fantasy begins. We see the boy always wearing a sweater featuring red diamonds, mimicking the recently adopted Red Crystal adopted by the Red Cross, and we begin to wonder the extent to which this story represents wish fulfillment. Caring for others is certainly part of being a humanist, a duty that any good soul cannot escape. Why then does Kaurismäki portray so many unseen Frenchmen (a prefect, a man who rats out Marcel by phone) so committed to doing the opposite? Are there darker wishes competing with the more noble ones? Undoubtedly.

Many of the colorful side characters suggest that it’s not so much the distinction between reality and fantasy that matters so much as paying attention to others. This is a film where we get to overhear two burly regulars at the cafe discuss the proper way to make scallops. There’s Inspector Monet – a beak-nosed man with a minatory moustache and the kind of sideburns and hat that don’t belong on a man with such a fleshy head – talking about the downside of being a cop, namely that people are likely to hate you for doing your job even when they need you. (I can’t possibly give away what Monet eventually does, but Kaurismäki is a sharp enough director to play against my distinctions.)

Initiative may also be the secret ingredient. There’s one great moment where Marcel shows up at a refugee center and boldly announces that he is the only albino in the clan. He claims to be a journalist and a lawyer, and further remarks that he has recorded the entire conversation.

Yet if Le Havre suggests that pretense may cause one to overlook the scummier qualities of other human beings, it manages to transcend these sprightly concerns and the cinematic homages because of its happy ending, which imputes that the occasional need for a blinkered fantasy carries possible dangers. But Kaurismäki isn’t condescending about this dilemma. In not pursuing the vivacious caricatures favored by Jeunet, Kaurismäki may have discovered greater wisdom in sticking with the more subtle, the more noble, the more human: the very real reasons why good souls stay alive.