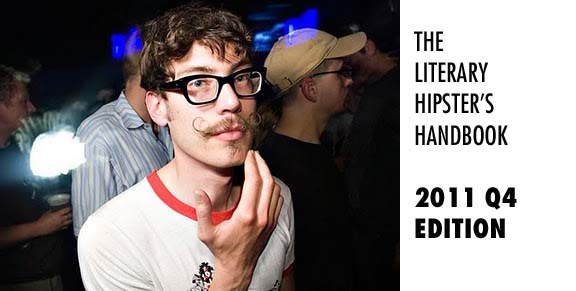 It has been five years since we last published a quarterly installment of The Literary Hipster’s Handbook. But the literary hipsters are still chattering.

“Ames it up”: The act of abandoning all literary activity to write for a television series. Also known as selling out or washing up. Literary hipsters who Ames it up are generally in their late 30s and early 40s and have lost much of their desire to write fiction. They beseech HBO and Showtime to give them a deal, attending dull meetings that are often spearheaded by illiterates, and, more often than not, end up writing material that is of noticeably inferior quality to their fiction. Literary hipsters who Ames it up continue to be observed at cocktail parties, where they are pitied by those who value art and passion more than money and vacuity.

“Duncan donuts”: 1. A hastily written essay written by a marginal literary figure (often of snobbish and humorless temperament) that only serves to widen the chasm initially created by said marginal literary figure. 2. An undesirable meal that literary hipsters should avoid. It is believed that the term was coined by two inebriated literary hipsters attempting to sober up in Dunkin Donuts while discussing Glen Duncan’s review of Colson Whitehead’s Zone One, but has since been used as a way to discourage other literary hipsters from eating anything from Dunkin Donuts.

“Dyer Maker”: A tedious and annoying individual who urges literary hipsters to read the latest essay written by Geoff Dyer. Dyer Makers are considered to be more insufferable than the Bolaño dilettantes, who can be easily forgiven. After all, the Bolaño acolytes are reading actual novels. Dyer Makers, by contrast, are merely reading mean-spirited criticism that has nothing especially original or substantive to say. In response to the Dyer Maker epidemic, several independent bookstores have created 86 lists identifying Dyer Makers in their community. The Dyer Maker is removed from the list once she can demonstrate sufficient knowledge and enthusiasm for D.H. Lawrence’s fiction, rather than some limey asshole’s reductionist take on Lawrence.

“to Keith”: To seek publicity and/or media attention by getting arrested at Occupy Wall Street. Literary hipsters who are Keithed generally have little interest in the actual movement and more interest in fulfilling their narcissistic fantasies. Much like those who are woodwinked, literary hipsters opting to Keith seek any excuse to avoid doing work or creating something that is truly ambitious and revolutionary.

“Rowan job”: Inspired by the recent Quentin Rowan plagiarism scandal, some literary hipsters have started to mimic other people’s seduction techniques, attempting to pass these moves off as their own. When the source of these seduction techniques is discovered, the literary hipster is then asked to withdraw from the dating scene due to “legal reasons.” (Note: Not to be confused with rim job.)

“woodwinked”: A feeling of crippling inferiority or needless resentment, sometimes expressed in published form and often mimicking the tone of a drama queen, whereby a literary hipster blames other people for his failure to produce a new novel. When woodwinked, the literary hipster spends much of his spare energies fixating upon some past incident (for example, a review written by James Wood from eight years ago) instead of working on new material. (Ex. Yeah, I’d go bowling with Toby, but he’s been such a drag ever since he got woodwinked.)