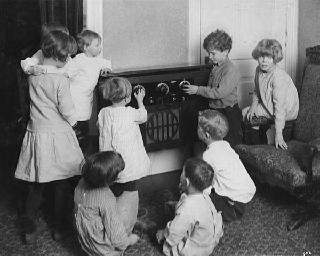 I had hoped that listening to episodes of the great old time radio program, Suspense, would divest me of my insomnia. But the unexpected glimpse into how people talked (or were presented as talking) during the 1940s has set my four curious lobes into a furious tizzy. I am now taken with “ankling” as a verb (who uses that these days?), one of many vernacular gems uttered by the private eye in “Beware the Quiet Man” (airdate: August 12, 1948). Why did three of the four episodes that aired in August 1948 feature a bank teller as a prominent character? “Crisis,” hitting the airwaves on August 19, 1948, should not work as well as it does. Yes, the silly flashback ending completely obliterates the enjoyably melodramatic 25 minutes that preceded it. But Kurt — a more genteel version of William March’s “bad seed” (to follow in fiction only six years later!) — is the kind of tremendously enjoyable creep that contemporary drama needs more of. Then there’s “Song of the Heart”, an utterly strange depiction of manipulation and muted masculinity (airdate: August 26, 1948). Van Heflin falls in love at first sight after a woman in accounting throws herself at him at a company picnic! Yes, dear, Taunta Alice must be experienced in a dark room. I’ve been steering a number of pals towards Suspense, and the damn program (combined with a few unusual personal adventures) has caused my brain to spill out pages of radio script. And I remain convinced that others out there might likewise have similar creative palpitations. Therefore, it would be a considerable injustice if I didn’t point you to the wondrous Web Archive and put you in (jarring clang) Suspense!