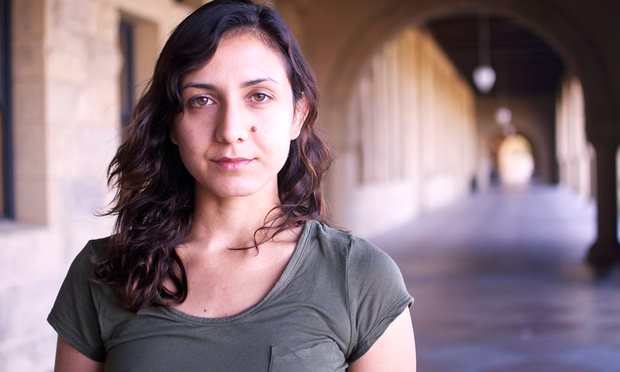 I was asked to fly to Los Angeles to interview Ottessa Moshfegh, who, after being shortlisted for the Booker, is currently believed to be the World’s Greatest Living Author. But it didn’t go exactly as planned.

I stepped off the plane at LAX. As I waited for my suitcase to roll up from the airport’s deepest bowels, observing a faintly funereal mist smelling vaguely sulphuric and subsuming all emerging valises, a cadaverous man with thin eyes, a sinister frown, and frightening olive livery — one who later identified himself as “Ottessa Moshfegh’s senior aide-de-camp” but never divulged his first name — grabbed me by the throat and tackled me onto the floor. I wondered if he believed me to be a benevolent and objective reporter covering a Trump rally.

“Are you the interviewer?” he rasped.

He had a peppermint breath that was somewhere between Altoids and ForeverMints and I could hear the crack of his jaw biting upon a pesky capsule that had stubbornly refused to dissolve in his mouth. The aide-de-camp drooled fine rivulets of spittle onto the 2005 Coachella T-shirt that I was wearing, one that I hadn’t remembered purchasing because someone had suggested at the time that I ingest mildly illicit narcotics.

The aide-de-camp then demanded that I produce my credit history, my blood type, my social security card, and my genetic lineage dating back six generations. Then he rolled me over and shoved a retina scanner into my eye.

“I’m sure you understand,” said the aide-de-camp. “Miss Moshfegh only talks with high-class people.”

It was apparently easier for me to get a job with law enforcement than to go through with an interview that had been scheduled three months before.

I told the jostling gentleman that I had attended a state school because I didn’t have any money in my younger years. He snickered at me and then gave me a beef stick. Even though I hadn’t eaten anything on the plane and was feeling a bit peckish, I knew that this was a test and resisted biting into the tantalizing Slim Jim that might have fueled me for another fifteen minutes.

I had heard rumblings about Moshfegh’s eccentric vetting process for interviews, which she’d initiated ever since being shortlisted for the Booker Prize. In the previous week, Moshfegh had humiliated a Guardian reporter named Paul Laity, demanding that he conduct his conversation shirtless while being flogged by a a bell hooks volume. As part of the deal, Laity had been asked by Moshfegh’s entourage to name his next child “Ottessa” in deference to the World’s Greatest Living Author. I have been unable to corroborate this detail, though a shellshocked Laity did croak “Run while you still can” near the close of our tense ten minute telephone conversation.

There had been no such bargains tendered towards me, perhaps because the prospect of me reproducing seemed less likely than Laity passing out cigars sometime in the next few years outside a hospital room, but the publicist informed me that under no circumstances should I ever paint Moshfegh’s novel, Eileen, in a negative light.

“Come on. Even the ‘Oxen of the Sun’ chapter has a few dull spots. And I love Ulysses.”

“I don’t think you understand how lucky you are to be here.”

Lucky? I had only accepted the gig because some editor had at long last taken pity on me. I was nevertheless grateful for the opportunity.

“This way,” said the aide-de-camp.

He proceeded to blindfold me and affixed my head with leather foam earphones that played the most terrifying glitch-pop I have ever heard. I felt my body being buffeted into the inside of a car. I felt someone taking my hand and fingerprinting me. Nearly an hour passed. All the Skrillex that had decimated my brain had nearly wiped me out. Then the earphones were removed.

“Good news,” said the aide-de-camp. “Miss Moshfegh has agreed to speak with you for fifteen minutes. She doesn’t mind being inconvenienced by the Booker or any press that will ensure her God-given talent is finally approved by the Literary Forces of the Universe. But only after you have written a note of loyalty to her undisputed genius in your own blood.”

Since I had a little spare blood kicking around in my veins, I figured no sweat. In hindsight, it may have been a tad foolish of me to agree to this after refusing the Slim Jim, which stared mockingly back in the stretch limo’s armrest, which was composed of rich Corinthian leather.

Finally, I was asked to recite passages from Eileen to prove my fidelity to Moshfegh.

“Cite the third sentence in the second paragraph on Page 26,” ordered the aide-de-camp.

“Uh…They were forbidden to do most things children ought to do – dance, sing, gesture, talk loud, listen to music, lie down unless they were given permission to?”

“Good. You’re remembering the right sentences. Does that resonate with you?”

“Can I plead the Fifth?”

“Okay. Maybe we should call my therapist then?”

“No, Mr. Champion, that won’t be necessary. You have passed the test, despite your shaky pedigree, your deplorable education, your three-days stubble, and the undisputable fact that you are a very terrible person indeed.”

“Didn’t you read the character reference letters I submitted?”

But this question went unanswered as the spotless Tesla Model S arrived at the Moshfegh compound.

“Get out of the car, you journalistic cur!”

“Alright, already. Can I get my microphones at least?”

“No. If you can commit Miss Moshfegh’s prose to memory, you will remember every quote accurately and be sued if even a stray comma is discovered to be out of place.”

I was led into a sprawling two-floor home with a four bay garage just off the edge of Little Arabia, overwhelmed by the smell of overly groomed grape vines and a meticulously landscaped front garden with a large sign reading YOU WILL BE SHOT ON SIGHT IF YOU STEAL A BERRY. SEE CASTLE DOCTRINE.

Ms. Moshfegh, 35, was seated at a large refectory table in a spacious living room, cutting bits of sentences from old Dorothy Sayers paperbacks for her next project.

“I’ll tame you, you shoddy pulpy sentence! I deserve riches beyond the dreams of avarice! Instant success! No less!”

This was a typical creative act for Moshfegh, although it was a curious form of self-affirmation. But I have to hand it to her. Moshfegh had indeed pulled a fast one on a number of Booker Prize judges who were not, in fact, in the habit of familiarizing themselves with genre.

The aide-de-camp gently explained to me that the Moshfegh philosophy involved pretending that mysteries confronting troubling ideas about women had never been written, even as she ripped off entire sentences from novels that had, in fact, done just that decades before. And I am only reporting this tidbit here because it was one of the few details that had somehow not been earmarked by Moshfegh’s otherwise fastidious quote approval team.

“Is my process making you uncomfortable?”

“No, but I wouldn’t mind an apple if you had one.”

“I’ve had eating issues since adolescence,” replied Miss Moshfegh. “There’s nothing in my work that I haven’t researched privately.”

I was feeling a bit faint, but it was hard to argue with someone who had been shortlisted for the Booker.

Moshfegh described herself to me as a person who has a long history as an unreported thief. If she isn’t absconding passages from Sayers novels, then she’s probably sneaking a package of pork loin roast underneath her overcoat.

“My family’s values seemed very different from the values of the world I was living in,” said Moshfegh. “They never acquiesced to my genius, but I’m heartened to see a bald loser like you see the light.”

At this point, Moshfegh asked me to kneel on the floor and pray to her. I told her I was an atheist. She said she was a novelist-god. I asked for a mat. When the interview was over, I had terrible scrapes on my knees.

Moshfegh described the humiliation of once having to wait longer than fifteen minutes for a cab when she lived in New York.

“It was a living hell. Didn’t they see my raised arm? There was a brief period in my thirties when every cab stopped for me in less than ten minutes. My hell is my life. My hell is my work. Now you see why I have a stretch limo always on call.”

She tracks the beginning of her writing career to checking out random books from the library while a student at Brown University, scanning the frontispiece, and then replacing this with a Photoshopped copy of the page listing her as author.

“The books were all so mediocre. I was better than all these authors even before I had written my first short story. If I could do this for every book, I would.”

Moshfegh says that she sustains a deep connection to her character, who she claims lives in a basement located just underneath her refectory table. When I asked if I could meet Eileen, she demurred.

“When I first discovered that the character I had created lived in my basement, I sent an email to my agent reading ‘Holy shit.'”

“Isn’t that a bit ineloquent for a writer of your apparent literary talent?”

“How dare you speak that way to a hip young writer’s writer!”

The aide-de-camp then tied a rope around me and threw me into the stretch limo. I passed out due to hunger and my shortage of blood. I woke up in some shady alley somewhere in East Hollywood. But the aide-de-camp had been nice enough to leave me the Slim Jim at my side, which I wolfed down with the force of a deprived animal. It gave me the fifteen minutes of energy to run to the nearest convenient store and sob to a clerk who didn’t understand what had just happened to me. But I did make it back to New York. Yes, I had lost blood, been manhandled, and had my privacy invaded. But I had also been in the presence of the World’s Greatest Living Author. I smiled on the plane ride home, knowing that the aide-de-camp was at least dimly aware of the Geneva Conventions.