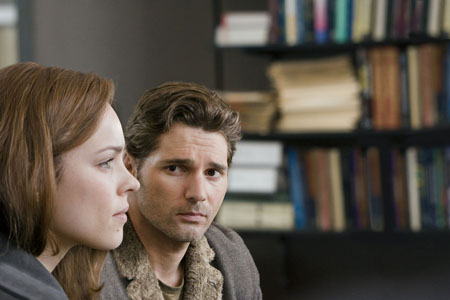 “Come with me if you want to love.” I expected that line at several points, and I confess that great expectation as a man who wanted to believe in this film. You see, aside from being a geek, I am also known to be something of a romantic sap. But the line never came. Henry, our buck naked SNAG and presumed protagonist, has this troubling tendency of emerging in some random time period, often fumbling around for fresh clothes, sometimes smashing in a car window, but always speaking in that deep and dependable Christian Bale-style Batman voice. (Such circumstances cause him to approach a preteen girl naked, and one wonders why he isn’t listed on the Megan’s Law database. If only Jean-Claude Van Damme were around to play Timecop.) Here’s a guy who seems to have found the time to smoke a few cloves before disappearing into the void (how else to explain his vocal affectations?), but who is incapable of drinking. You see, all that wine causes him to jump about from year to year too frequently.

But he isn’t interesting. He isn’t the Henry that I read and enjoyed in Audrey Niffenegger’s novel a few years ago. (But to hell with him. What of Clare?) But he does look an awful lot like Michael Biehn’s Kyle Reese, and he does shout the line, “What year?” as if some California governor is on his trail hoping to collect some tax revenue to salvage the plummeting state budget. (Not a chance. This film is set in Chicago, but lacks the late John Hughes’s gift for showing off the town.) But then this is Eric Bana, an actor never known for great depth. He’s the guy you call when Christian Bale isn’t available, or when you need some one-dimensional Romulan heavy for a reboot of a profitable franchise. I’m sorry to be so prejudicial, but it’s the truth. I want Eric Bana to wow me, but he reminds me too much of Michael Paré in the 1980s.

And it’s difficult to take any movie that includes a line involving “the most serene gestation on the planet” too seriously. As much as it pains me, we can blame screenwriter Bruce Joel Rubin for such colloquial absurdities. The man did give us, after all, Jacob’s Ladder and Ghost — two perfectly respectable flicks. Because I’m feeling generous, I’ll even give Rubin some plaudits for the Wes Craven joint, Deadly Friend, which had the decency to feature a silly basketball beheading scene. But Rubin isn’t that writer anymore. Or, rather, the system won’t allow him to be that writer anymore. When Henry meets his future father-in-law, he’s Philip Craig playing Philip Abshire playing Christopher Walken in The Wedding Crashers. You can imagine, at times, a bunch of screenwriters trying to cut and paste bits from other commercially successful films. Henry and Clare aren’t afforded the time to establish their relationship. The book had the decency to keep things cheerfully foggy, in large part because Niffenegger knew very well that the high-concept premise needed to ride on how Clare perceived this forever-shifting man of mystery. But the film version pins much of the perspective on Henry. And it’s almost as if a bunch of marketing guys had the following conversation:

MARKETING GUY #1: Dude, not only do we get the rom-com crowd, but we can get an entirely different audience!

MARKETING GUY #2: Stop calling me, dude. Sir is okay. But not dude.

MARKETING GUY #1: Whatever, man. Anyway, you’ve got all these sad fucking guys who have to take their girlfriends to some piece of shit rom-com.

MARKETING GUY #1: But we get them too!

MARKETING GUY #2: We already have them.

MARKETING GUY #1: No, no, no! Time travel! You’re not listening.

MARKETING GUY #2: Some of that sci-fi stuff?

MARKETING GUY #1: Dude, I totally got some action in San Diego.

And so on. Insert swagger and comparison of penis sizes. But the point here is that Marketing Guy #1 and Marketing Guy #2 seemed to think that The Time Traveler’s Wife could work as both a science fiction movie and a romantic comedy, thereby killing two demographics with one stone. But the book wasn’t designed this way.

See, here’s the thing. Niffenegger’s book is good, but don’t burrow into the damn novel hoping for deep insight. We needed to believe in the time travel plot. Indeed, it’s essential we believe in the time travel plot. Because, truth be told, the behavioral observations — which include the couple’s two best friends (one played in the film by the dude from Office Space!) — are about as dimensional as the regulars on a half-decent but instantly forgettable sitcom. It’s more Monica wondering what Chandler is up to this week, rather than John Cassavetes nuzzling his shaky camera into Gena Rowland’s soul. But in the book, we don’t care about the narrative shortcomings. Because the time travel plot is pretty damn cool and the perspective is told mostly from Clare. And we want to know what happens.

But in the film version, we know about Henry’s backstory. Because it’s told almost entirely from his perspective at the outset and there really isn’t room for speculation. And, again, he’s played by Eric “Hunk of Meat” Bana. If I wanted to spend 100 minutes with a hunk of meat, I’d waste my time in a meat locker. Bana gives us constantly blinking eyes and that husky voice of emo certainty. The makeup people can’t even age the dude with any verisimilitude. A streak of gray indicates that he’s in his early forties, but his wrinkles stay the same.

I can’t fault director Robert Schwentke for this, because he does his best to make this movie visually interesting. There are endless shots of hallways and doorways, establishing an interesting spatial quality that matches Henry’s time-traveling. But the cheesy Spielbergian handprint on the window had me howling for the Subtlety Police, as did the obligatory growing-up montage. I want to ensure anyone who is reading this that I’ve seen worse films of this type, but truthfully, I had more fun with the 2001 time travel romantic comedy, Kate & Leopold.

“How dare you! You tricked me!” “I never had a choice!” Not exactly the most nuanced dialogue centered around a vasectomy for a couple that knows each other over many years. But then this is a film that lacks the guts to take on the maturity or even the blossoming of romance, which I did find within Niffenegger’s novel in spurts.

The upshot is that you’re probably better off reading the book, which doesn’t have to contend with this obeisance to the marketing team and manages to make improbable moments work because of context, including the infamous lottery ticket scene. Speaking of striking paydirt, I’m not sure if Niffenegger deserved $5 million for her second novel, but at least she has passion. The team that put this movie together is more interested in getting you excited about young, attractive, and ultimately superficial people. I’ve complained about the Hunk of Meat, but Rachel McAdams wins my approval and deserves better than this. So too does the audience.