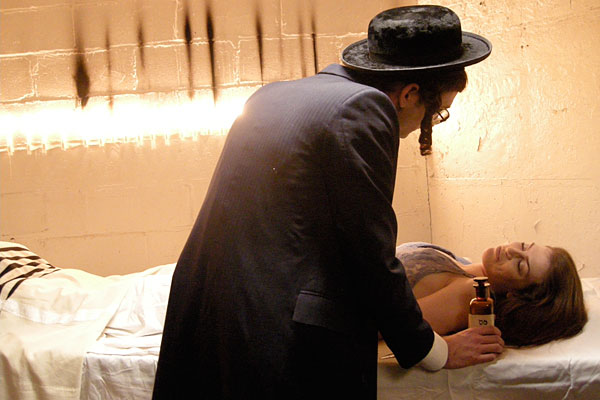 Regardless of my Jewish state (or lack thereof), it is hard to say no to a movie titled Romeo and Juliet in Yiddish.

“It was drek,” said the critic braying in the vestibule. She was a shrew of advanced years, the type who hasn’t laughed since the 20th century often encountered in Manhattan. She was the unwanted accessory that comes with the screening room installation kit. I didn’t know if I should try and return her to the manufacturer. Surely there was some lonely and unsmiling Tarkovsky lover who would require her. But this was not my screening room and this was not my call. I decided to stay silent.

I was baffled. Drek? Yes, Eve Annenberg’s Romeo and Juliet in Yiddish (part of this year’s New York Jewish Film Festival) was a mess, a movie with too many competing instincts. It was a film that didn’t know whether it wanted to be a study in cultural fusion, a willowy melodrama, or a comedic investigation into the many notions of Jewish identity. But then I am not of the people. I do read a lot of Jewish writers, have many Jewish friends, and am interested in Jewishness. I do seem to attract a lot of Jewish men at social gatherings, perhaps because I listen or perhaps because I have the tendency to say things that are apparently profane. Not long ago, on one of my recent interborough walks, I was alarmed when some kids called me a kyke for having the temerity to read, walk, and maintain an unruly beard (all at the same time!) as I made my way into the Meatpacking District. I suspect all this explains why I laughed a good deal over Treslove’s predicament – not Jewish, but very “Jewish” – in Howard Jacobson’s The Finkler Question.

Regardless of my Jewish state (or lack thereof), it is hard to say no to a movie titled Romeo and Juliet in Yiddish. The grand irony of Shakespeare being appropriated for the Jewish theater was too irresistible, particularly when one considers how Jewish culture has been appropriated. (Just consider how many Jewish songwriters have composed Christmas carols!)

I had brought along someone who was Jewish to atone for my lack of Jewishness and to prevent any mishaps. You see, the last time I had attended a New York Jewish Film Festival screening, I had been reprimanded by a publicist for violating some disclaimer in microscopic type. I had decided that I would read the press screening invite more carefully and not say a word, although I did end up cracking a few jokes to someone. (You see how easy it is for me to resist even my own imperative! I am my own apostate!)

None of this tells you much about the film. If you have a sense of humor and an open mind, I suspect that you won’t call it drek. But the film stands more of a chance (admittedly slim) with a Reform crowd than a Conservative one. For the movie contains numerous Orthodox characters who have been banned from the community. And I suspect that some of the audience will feel as if they have been banned if they laugh with the movie. Consider this belligerent blog post from The Circus Tent, which berates the characters for being “haunted by the fact that they weren’t allowed to wear metal-framed glasses nor have buckles on their belts. It shows you what their intellectual capacity consists of. The fact that they would be chosen to translate the works of Willy Shake shows us what kind of knowledge of Yiddish the directors of the project have.”

Well, that’s the point. There are some sections of the movie that appear to have been filmed in a desperate rush, with handheld cameras and muddled sound. Other parts of the movie contain a modest degree of polish, the film appearing to be comfortably financed and in an early stage of production. Then there are the portions of the film, involving some on-the-fly CGI, where the film tries too hard to be professional. For me, these wildly inconsistent visuals imbued the operation with a homespun charm. After all, if you are making a movie about the creation of dramaturgy, shouldn’t the results feel as disparate as the rehearsals? As if to pound the point home, Annenberg includes a dude who shows up at random intervals film to sprinkle literal magic into the operation. And haven’t we all seen this gentleman?

I have no command of Yiddish, so I can’t share The Circus Tent guy’s indignation. But I do hope that he’s settled down by now. In defense of the woman who damned the film as drek, I will say that some of the Shakespearean recreations aren’t inventive enough. Friar Lawrence becomes Rabbi Lawrence. The Capulets and Montagues are distinguished by peyot. Swapping the party at the end of the first act to a purim party is a mildly creative choice. But this schematic approach, while initially entertaining and probably funny on paper, becomes tedious. Still, I very much enjoyed the sacrilegious moments of Hasidic Jews engaged in a knife fight that nobody feels inclined to break up. I almost expected them to sing “from your first brit milah to your last dying day.” I should also point out that the film is quite friendly to non-Jewish viewers, providing Ken Loach-like subtitles for Jewish words. Some are obvious (“nitter” for example); others I did not know. I also enjoyed the moments where our Jewish heroes attempted to negotiate everyday situations (such as the collection of luggage) based solely upon their trust in the community. Alas, another man’s word is not enough for an unsmiling official.

Perhaps I liked the film more than I should have because its Jewish characters – apostates living in the back of a Budget Rent-A-Car truck – were outsiders with a healthy calmness while doing very bad things. Saying a prayer before shooting up almost defeats the purpose of a seedy escape. And if I learned that somebody had maxed out my credit cards for a luxury hotel room, I would likely be more apoplectic. There’s probably a heavy-handed moral here somewhere. But if partaking in art keeps the universe calm, then that’s hardly a sentiment to get angry about.