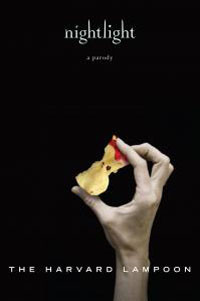 I don’t know if the world really needed a parody of the Twilight books. Stephenie Meyer’s acolytes, as cultural observers have opined, are quite fixed in their passions. I’ve always subscribed to the middle ground version of the “gateway drug” theory. You may not get the kids hooked on Ulysses or ensnare them within the apparent stomach-churning fallow of fan fiction. But you can listen to them instead of dismissing them, and, with enough patience, maybe get them started on Lovecraft or Poe.

The Harvard Lampoon‘s Nightlight clearly doesn’t appreciate the source (the first rule of parody) and it reads like a funny idea best confined to a few thousand words. But the first chapter does offer some wonderfully awful sentences. “I had a dejected, brooding expression on my face, and I could tell from the reflection in the window that it was an intriguing expression,” declares Belle. Why are there two contradictory expressions in the same sentence? And why should any reader tolerate this? How can any serious writer forget about a pivotal detail established in an earlier clause?

Later, we get this exquisitely extraneous description: “So when I closed the door to my room, unpacked, cried uncontrollably, slammed the door, and threw my clothes around my room in a fit of dejected rage, he didn’t notice.” Aside from the discombobulated verb clauses, we have a door that is closed twice. (It’s also quite amusing that the mysterious Harvard Lampoon writer managed to slip “dejected” into these inconsistencies.)

Nightlight also declares war on silly similes. A finger is “squeezed through a diamond ring like a sausage through a slipknot.” We learn of a girl with “brown bushy hair in a ponytail that was more like a suirrel tail in the context of her beady squirrel eyes.” There’s even one sentence that reads: “He was muscular, like a man who could pin you up against the wall as easily as a poster, yet lean, like a man who would rather cradle you in his arms.”

The question isn’t why the Twihards are enraptured by vampires. That’s an understandable sentiment for any teenager seeking an engaging fantasy. The greater dilemma is why these fans continue to revere prose that’s written like a man with a high BAC level trying to ride a unicycle.

The fan base, however, isn’t without its skeptics. There was the campaign led by one fan to return Breaking Dawn for its inadequacies. Then there was the Midnight Sun leak, which was so riddled with gaffes that Meyer was forced to close up shop.

The discarded draft still exists (PDF) on Meyer’s site. And it turns out that the Harvard Lampoon wasn’t entirely off the mark. On page 9: “Her scent hit me like wrecking ball [sic], like a battering ram.” On page 15: “A spur of the forest reached out like a finger to touch the back corner of the parking lot.” On page 74, anger is “[l]ike a furious kitten, soft and harmless, and so unaware of her own vulnerability.” On page 109: “My body had turned into something more like rock than flesh, enduring and unchanging.” (Thanks for the specificity, Stephenie.) On page 145: “dark hair thick and wild and twisted like seaweed across the pillow.” (I guess some people slumber in morasses.)

I understand that young people are often drawn to associations, but how are any of the above similes worthwhile? Is there a way to get the Twilight fans more jazzed up about precision? I think so. One young fan named “Hot Diggity Dogs!,” responding to a review of Eclipse, wants to know:

what are some of the powerful similes that Stephenie Meyers uses in Eclipse? I can’t find that many, and i NEED some for school! please help, thanks!!

“Hot Diggity Dogs!” may be trying to cram a paper in at the last minute, but I’m wondering why she couldn’t ask this question of her teacher. Is it because the teacher condemns the main source of interest?

And there’s this Amazon discussion of Laurell K. Hamilton’s similes and metaphors in which several Hamilton fans try to come to terms with the clumsy language:

If she’d said “just before a devastating storm” it would make sense, but the sky doesn’t generally fall down. And it would be hard-pressed to destroy everything you own….I know what she’s trying to convey, but she really bites at these things. If she isn’t nonsensical, then she’s outright bizarre.

The takeaway here is that these books, whether authored by Meyer or Hamilton, clearly offer something compelling to these readers. And while those possessing literary standards can pooh-pooh “lesser” literature (as I have just done), I can remember when an English teacher ridiculed me in seventh grade for expressing enthusiasm about Stephen King. Now Stephen King may not be the greatest writer in the world, but he did manage to suck me in at an early age. And every now and then, he still does. But I certainly haven’t forgotten his role in leading me to a world of books. And I suspect that many Meyer fans will feel the same way in about a decade or two. While there’s certainly good cause to condemn Meyer, it’s something of an irony that King’s remarks about Meyer earlier this year initiated something of a jihad. But what the Twihards missed within King’s comments was his praise for Meyer’s compelling storytelling.

Nightlight might have functioned with this same duality in mind. But after the first chapter, the writers stopped mimicking Meyer’s faulty sentences and tried to sabotage the storytelling with lame jokes. I got bored, but the book was so short (and the subway ride so long) that I made it to the end. But what if the writers had designed the parody so that young readers could understand why adults sneered down at a “lower” art form? Not only might they have managed to get through to the Meyer fan base, but they might have kickstarted a internal debate about what was so troubling about the source. Some sensible advice about parody, which is particularly applicable to Nightlight‘s shortcomings and Meyer’s fans, arrives from a gentleman going by the name of “La Touche Hancock” in 1920:

To the parodist, then, I say: Make your parody such that the poet himself will laugh over it, and wish to make your acquaintance. Finally, remember that humor of the truest quality rests on the foundation of belief in something better than it seems, and its laugh is a sad laugh at the awkward contrast between man as he is and man as he might be.