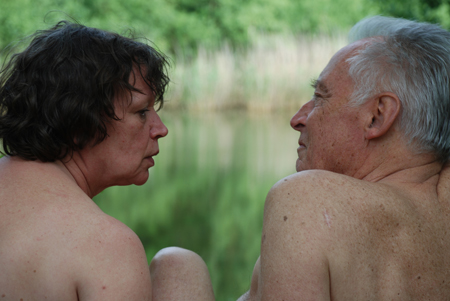 My first instinct was to dismiss the silly second half of Andreas Dresen’s Wolke Neun (Cloud 9 for Yanks), which wallows in childish dialogue (“That’s just so mean!”) and betrays its wonderful first half. But after chewing on this film over the last few days, I’ve found, much to my surprise, that it has stuck with me. I’ve come around to the possibility that these melodramatic developments are, in fact, essential to the film’s broader point. I don’t believe (and my apologies to Jane Juska) this film is really about older people having sex or even elderly characters schtupping about and having a bit of fun, but about the many ways in which civilization has made sex the province of the young, the healthy, and the bendable. We all know that plenty of other people have sex too, but we settle for these smooth and unwrinkled depictions. Aside from the surefire crowd-pleasers of lesbians or ménages à trois, that’s the only sex these days that really sells. But have we lost sight of the awkward gaffes, the intercourse we have when we’re languid or not so virile, or, found sometimes in the troubled suburbs, those clumsy attempts at spontaneity?

Cloud 9 wants us to consider these questions. By casting exceptional actors in the parts (Ursula Werner and Horst Westphal, who resembles, at times, the German answer to Jack Lemmon) and by focusing on a sexual affair not often portrayed in cinema — one between Inge, a 67-year-old married woman, and Karl, a smiling 76-year-old bachelor — Dresen may be asking us to ponder our relationship with authenticity. (Incidentally, this is a subject that Dresen is quite punchy about in interviews: “There is no authenticity in the cinema! If you want authenticity, you should look out the window. You can see truth in the cinema, but you don’t see anything that’s authentic.”) But because Cloud 9 is committed to an inauthentic truth, I’m inclined to accept the inauthentic telephone call that comes near the end of the film and some of the closing corny sentiments (“Perhaps everything has its time.”). For why should we expect constant authenticity from cinema? Maybe we don’t really want to know the authentic truth and maybe we should be spending more of our time looking out windows. (Certainly this film’s failure to depict Viagra caused me to question the dutiful thrusts of our charming septuagenarian bronco.)

Here is a film that initially sets most of its action indoors, suggesting a sedentary life of decay. What do Inge and her husband Werner do for fun? They spend their time listening to records containing train sounds. When they do leave the house, they take a random train and take in the window’s view. “He loves train rides,” explains Inge. Karl, by contrast, offers buff and tangible ambles. “I prefer bike rides through nature,” says Karl. These distinctions may seem clear-cut to us, but Inge actually finds Werner’s locomotive fixations to be not loco, but touching. This is, after all, the man she’s been with for thirty years. Why should she expect otherwise? But then Inge’s lifestyle isn’t so much about expanding her self-discovery, as it is about approaching existence much as she takes on her part-time job: sewing alterations for handsome strangers. No surprise then that our smiling friend Karl meets Inge through her work. But this isn’t exactly Last Tango in the Nursing Home, because these characters thankfully remain independent. But that impending possibility is suggested with Werner’s father, who is infirm and in a rest home. “If I ever end up like my father,” says Werner, “you can shoot me in the woods.” It’s safe to say that Werner lacks Karl’s smooth touch. But then this is Germany.

During the scenes in which Inge rubs lotion on Werner, I was reminded of the creepy scene in Mike Leigh’s Hard Labour, in which Liz Smith rubs her husband’s hairy back. But Inge and Werner seem to get along better than Leigh’s happy couple. Does it all come down to physicality in the end? If so, that’s one hell of a cinematic conceit. But it would be foolish to suggest that this intriguing film is just a dialectic. (Perhaps this is simply what I wanted it to be.)

I should probably point out that during one of the film’s many long takes, I became strangely fixated on the two breast-like bowls hanging on the dining room wall. I doubt that many critics will confess this. And I need not go into the redblooded male’s unwavering interest in mammary glands. But I found this visual to confirm my strange hypothesis. Why on earth would I concentrate on this? Because Dresen may understand that my cinematic mind, like many, is programmed to accept inauthentic truth. And even when there’s a living, breathing character before us, art forces us to fixate on the potential symbols. “That’s just so mean!” says Inge over and over again when Werner eventually levels with her. Childish? Oh yes. But if we were more honest about cinematic authenticity, we wouldn’t have to be reminded. And if we were more truthful about such matters, we wouldn’t have to go to the cinema.

But Cloud 9 is an interesting film.