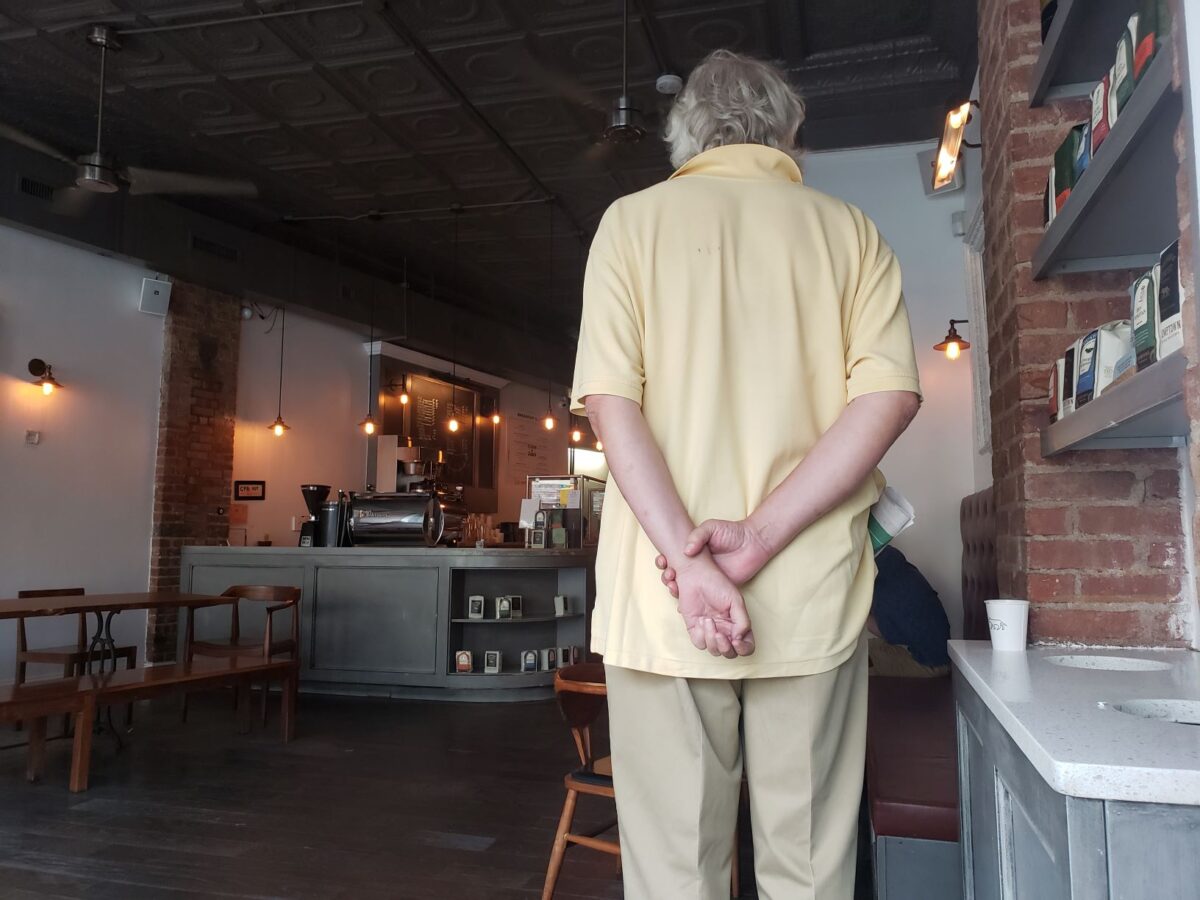 In which your writer’s happy cafe sojourn is interrupted by a strange man in a yellow shirt.

I hit a cafe on the edge of Prospect Heights, a place where I knew I would not be bothered. If another writer who knew me entered through the doors, then he would almost certainly ignore me in this cafe. There are some venues in Brooklyn that possess such an innate social code, one that is ideal for introverts and one that was particularly suited to the misanthropic headspace I had willed myself into.

For a good ninety minutes, I occupied my table with unabated joy, reading and writing in blissful peace. I knocked off the remainder of Patricia Lockwood’s No One is Talking About This in one greedy gulp. Then I cracked open my Dell laptop and wrote two pages of the script for a live show I am staging in mid-October. Two pages of moral philosophy cloaked in salacious banter. What fun! This was a first draft that I had nearly finished, but that I was slightly behind on. Still, I wasn’t about to self-flagellate myself. I could leave such lacerations to the online trolls who still pestered me from time to time. And if they got too unruly, I could always block them. I was in a fairly happy place. The script would come from my head and heart, as all scripts inevitably did. The hope was to complete the draft before the end of Labor Day Weekend, a three-day period that most people seemed to agree was the final nail in summer’s coffin. While others would fritter their time away catching the last gasps of the sun, I would be a productive monkey — even if this involved hunkering over like a marsupial while walking up and down Flatbush Avenue and eating an inordinate amount of bananas. There are always madcap methods you can summon to meet your quota.

That’s when the man in the yellow shirt arrived.

Now I know enough about color theory to understand that yellow is considered the color of happiness and the color of jaundice or pestilence. And the man had the aesthetic duality of a coin: cadaverous and gaunt from the back, disheveled and corpulent in the front. One expected some deity to pluck this incongruous man into the air with two giant fingers and flip him over in order to determine which of the two most problematic continents should be decimated first. Would it be the plumper side or the deader side of the man that would seal the deal? This was obviously a question beyond my mortal understanding.

Wispy sideburns crawled down the sides of the man’s face like bushy birthmarks branded by some baleful demon. The man looked somewhere between fifty-five and seventy years old. And he unsettled me. Because he insisted on standing. Standing in a position so that you would never quite see his face, which instinctively escaped all light and disguised his natural and joyless crags within some gentrified penumbra.

There were plentiful tables in the cafe, but he refused to sit. He had the obduracy of a Lovecraftian manservant who was prepared to lead you into some ghastly underworld populated by bestial brutes, who would then proceed to tear your flesh apart with their bare claws. And he stood with his arms constantly behind his back, with his left knuckle clenched in a strange symbol whereby his thumb and forefinger forged a strange circle — almost as if he was part of some secret society responsible for most of the world’s ills.

The man in the yellow shirt stood two feet closer to me than I deemed comfortable. Social distancing has certainly rejiggered the norm of what was acceptably close, but you could usually count on your fellow human beings to intuit what was right. The man in the yellow shirt operated outside of natural instinct and I was forced to conclude that he was a messenger sent by Belphegor.

There was a woman at the table near the window. The woman had spent much of the time sighing stertorously. She resented reading her book and wanted everyone in the cafe to know it. This was, of course, the most passive-aggressive display of narcissism that one sees in cafes.

Meanwhile, the man in the yellow shirt stood in place. He didn’t even sip the coffee that he had ordered. He had placed it on the edge of the cabinet that housed two trash receptacles. He was as frozen and as expressionless as a stone sentinel. As I was to later observe, he had actually ordered three hot beverages. But he only seemed to possess only one beverage at a time. Did he simply order hot beverages as a pretext? He stood as if he was born to wait. A more advanced and rehearsed version of the “fuck my life” look that you see on people over forty who commute to a corporate job that they clearly despise. Perhaps the man in the yellow shirt had arrived as a warning.

The exasperated woman packed up her things. And I seized the table near the window with the legerdemain of a subway commuter snagging the last available subway seat during rush hour. It seemed as if I was in the clear.

But then the man in the yellow shirt adjusted his standing position so that he was exactly two feet too close to me at this new table! And he turned his back to me. The man’s mathematical precision unsettled me further. And I did my best to bury my nose in the next book in my pile.

I wondered if the man in the yellow shirt was some version of me from the future. But he was slightly taller than me. And he had a full head of hair that was a disastrous mop of white. If he had come from the future, I suppose it is possible that scientists fifteen years from now could have corrected my male pattern baldness and extended my height. But I knew myself well enough to know that I would never assent to such cosmetic assaults on my authenticity. I would grow old gracefully, thank you very much.

I considered politely asking the man to back off. But given the way that he seemed to know the exact distance with which to unsettle me, I nixed this option. For all I knew, this was only the beginning of his subtly invasive moves.

I closed my eyes for a second and, when I opened them, the man in the yellow shirt had disappeared without a trace! Had I imagined him? Reader, I had not! As you can see, I did successfully photograph him while sitting at the second table.

I do not know if the man in the yellow shirt is targeting other cafe regulars in Brooklyn. But let my report serve as a warning. Who knows? Perhaps he just wanted to be loved.