WEEKLY QUESTION: Will this week’s NYTBR reflect today’s literary and publishing climate? Or will editor Sam Tanenhaus demonstrate yet again that the NYTBR is irrelevant to today’s needs? If the former, a tasty brownie will be sent to Mr. Tanenhaus’ office. If the latter, the brownie will be denied.

I’m truly tempted to twist the definitions of the test here. Editor Sam Tanenhaus has not only presented us with more substantive fiction coverage than the norm (two reviews of fiction that are at least two pages long and that aren’t written by war hawks), but he’s also thrown in an unflinching essay about Hunter S. Thompson. The rugged spirit is certainly welcome, although I don’t believe it will last more than a week.

There’s Lovecraft, Joyce Carol Oates’ nonfiction compilation, Ishiguro, Poppy Z. Brite, and even an essay by Salman Rushdie. For the first time in recent memory, Tanenhaus has included supplemental essays that actually have something to do with books. Shocking.

But while this week’s fiction coverage is variegated, we’re still dealing with a fiction shortfall. Only 44.4% of the coverage is fiction. This falls a few percentage points of the 48% minimum required. And from a book tally standpoint, one need only observe the table of contents to see that the nonfiction is twice as long as the fiction.

Pay no attention to the man behind the curtain. Substantive fiction coverage is there, but the reading public requires greater awareness and depth of today’s publishing environment. The Lovecraft volume has been available for several months and Laura Miller introdued the odd spate of Lovecraft-bashing back in February. And two paragraphs a piece is hardly enough space to cover the latest from Leonardo Padura Fuentes or Poppy Z. Brite. Fiction Chronicle? Try Fiction Chicken McNuggets.

This test concerns the ratio of male to female writers writing for the NYTBR.

Only one woman has covered fiction this week.

However, Sam has brought in five (!) women writers for the ten nonfiction reviews this week. And not just anyone, but the likes of Francine Prose and Barbara Ehrenreich. I was particularly enthused to read Sara Wheeler’s energetic review of a John Ledyard biography, which balances a sense of wonder with an introduction for those who don’t know who Ledyard is.

Daniel Handler on Lovecraft, Francine Prose on the Peabody Sisters, Barbara Ehrenreich on John Brown, and a contribution from one-time NYTBR editorial candidate Ben Schwarz are all interesting choices. Even if the Ehrenreich review is a bit turgid and the Handler review an almost Peck-style hit piece (more below), Tanenhaus has demonstrated a commitment to experiment a bit. And for this, we award him a brownie point.

I was a little alarmed to see a full-page ad for the Better Sex Over 40 Series in this week’s Review, not because I’m bothered by middle-aged people fucking (actually, it’s something I encourage), but because of the ad’s telltale revelation. Without the succor of an immediate cold shower, this advertisement suggests what the NYTBR considers as its demographic. And it might explain why so much of the NYTBR‘s coverage has been lacking.

It serves as an unexpected metaphor. If the Times brass can’t understand that people younger than 40 not only buy and read hardcovers, but are impassioned about literature (witness the contretemps over Foer), then the NYTBR is truly destined to become a dinosaur. Is Bill Keller simply not aware that more college students apply to creative writing programs than any other field in English, thus sustaining creative writing programs as universities face budget shortfalls? And from a business perspective, doesn’t it make sense for the NYTBR to invite long-term readers rather than frightening them away with microscopic reviews? Or has the Gray Lady thrown in the towel on attracting a younger demographic?

The general perception with newspapers is that only old folks read them. But if that’s the case, why has Tanenhaus been so determined to include blurb-sized reviews? Does he really believe that people born before 1965 have shorter attention spans?

Dan Green has already weighed in on David Gates’ cover essay. We’ll only say that we’re glad to see Gates calling the editors of The Outlaw Bible of American Literature on not including Raymond Carver or Susan Sontag. If the safe ‘n’ sane offerings of He Who Shall Not Be Named ensure “outlaw writer” status, then you may as well toss in the collected works of Bil Keane?

As a hit piece, Daniel Handler’s review is surprisingly poor. Handler has long contributed thoughtful book reviews to The San Francisco Chronicle. Even when I’ve disagreed with him, he’s always offered solid examples to prove his points. But it’s hard to take Handler seriously when he’d rather describe his physical reactions to reading Lovecraft and when he resorts to mixed metaphors. Not only does Handler misunderstand the Weird Tales canon, but he approaches it with open contempt (“biologically impossible, logistically unplumbable and linguistically unpronounceble”). This from the guy who gave us kids going on quests to recover a sugar bowl and who litters his Lemony Snicket books with wordplay.

The point here is that if a reader can get caught up into Handler’s Snicket books, then a reader can likewise get caught up in Lovecraft. (For the record, I dig both.) Fiction, with its many styles and constant experimentation, is far from rigid. Instead, the best that Handler can do is qubble over Lovecraft’s semantics. As any Lovecraft afficianado can tell you, Lovecraft was an Anglophiliac of the highest order. As such, Lovecraft’s argot, laced with a quirky enthusiasm for modifiers, takes some getting used to. But it never occurs to Handler to question the Lovecraft phenomenon: How has a pulp writer, who kept in touch with the world around him largely through correspondence, managed to preservere for seventy odd years? Surely, the question is worth dwelling upon, even when playing the devil’s advocate. But Handler never broaches the question.

By my estimate, almost three paragraphs of A.O. Scott’s review are dedicated to Joyce Carol Oates’ prolific output, demonstrating once again that Scott remains determined to point out the obvious long after the point has been made.

I expected Salman Rushdie’s essay to be as didactic as they usually are, but with the exception of one flagrant swipe at the Bush administratino, Rushdie keeps a level head, suggesting that writing can be a polarizing force for disparate voices to question the issues of our time. Quite an inspiring turn from the usual Back Page fluff on dating books.

Beyond passing two of the three tests, this week’s NYTBR is actually worth reading. Tanenhaus has injected this week’s review with cogent coverage that covers a variety of issues pertaining to books. While he’s still sloughing on the fiction front and his nonfiction coverage isn’t as crackling as it could be, this week’s issue is a step in the right direction. And I hope that Tanenhaus continues to experiment along these lines.

For this, Tanenhaus will, for the first time in Return of the Reluctant’s history, receive a delivery of brownies this week. 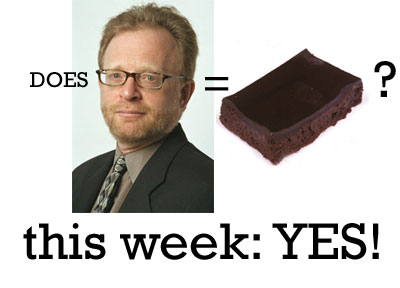