This week, it’s very hit-or-miss at the NYTBR. However, Tanenhaus should be commended for taking a few risks (he scores by throwing in de Beauvoir and Persepolis 2, but Klosterman is a serious mistake). Suzy Hansen’s article on plagiarism is a nice journalistic piece, but it belongs in the magazine. All in all, we’re disappointed that we couldn’t put on our oven mitts, because we were definitely in a brownie-baking mood. We’ll let the statistics stand alone. 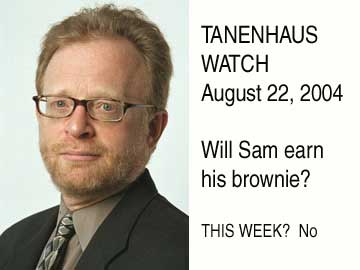 The WTF? Assignment: Chuck Klosterman, who we thought would bring a humorous take on self-help books in his Real College review, but instead decides to pull a Wieseltier and dispense his own advice. (minus one brownie point)

TOTAL NUMBER OF BROWNIE POINTS FOR AUGUST 22, 2004: 2
Does Sam Tanenhaus Get a Brownie This Week? No (minimum 3 brownie points needed to score brownie)