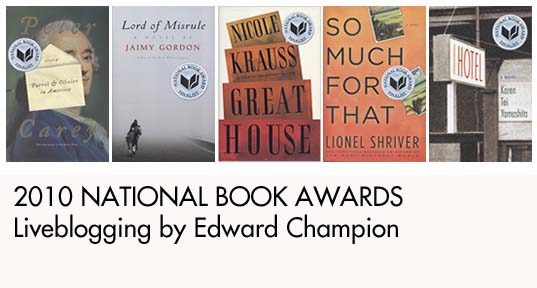 Liveblogging the 2010 National Book Awards. (This page will be updated throughout the evening of November 17, 2010.)

4:10 PM: I just got back from interviewing a National Book Awards nominee for a future installment of The Bat Segundo Show. Now I have about an hour to shave the five days of stubble off my face and the top of my skull and find something nice to wear before hitting Wall Street. At least three friends have informed me that adopting a clean-shaven approach is the only way that the National Book Foundation will let me penetrate the inner sanctum, although this esteemed organization has been nice enough to grant me (perhaps unwisely) press credentials. I sat out the National Book Awards last year. Ended up getting sucked in through Twitter. People thought I was there. And I guess it comes down to this. Just when I thought I was out, they pulled me back in. Every November, I’m the Regis Philbin of the literary scene. Or maybe the Fred Willard.

This year, there will be two places to find me: this page and my Twitter account. I have just eaten a very large burrito to ensure that I will have a ridiculous amount of energy for the floor. If someone gives me drinks, I’m sure there will be additional craziness. Charging the batteries for my sound equipment. Charging the netbook. Charging the jet black fire of my soul.

6:29 PM: There was a fashion emergency at Atlantic Mall that required the swift purchase of a shirt after the other one decided to commit a unique self-immolation. But I am now ensconced at the press table. Cal Reid from Publishers Weekly is to my left. There is a thick rope separating the press area from the fancy tables. The rope is not the kind you use for jumping, nor for hanging a man. Although I suspect that if some author gets better tonight, there’s always the prospect for eccentric violence. You don’t see kids playing with this kind of rope. It’s the kind of rope that tells a man that he’s not so good to sip gimlets or snort blow. I don’t anticipate seeing gimlets and blow tonight. But maybe there will be some debauchery in the restrooms or off-premises. Will investigate if there’s time.

7:06 PM: Fiction judge Samuel R. Delany and nonfiction judge Jennifer Michael Hecht are both staying mum about whether there were any heated deliberations or exclusions. Delany did not venture an opinion to me in relation to Franzen’s Freedom, which, rather notoriously, was kept off the list. Hecht told me that the judges weren’t allowed to attend last night’s readings. And while, like Delany, she stayed mum on the politics, she did tell me that the process was surprisingly civil. The one thing they both agreed upon: lots of reading.

8:12 PM: Andy Borowitz is a perfectly respectable fifth-rate Vegas entertainer. I keep looking around for relatives in Hawaiian shirts. There was a very lame act about Best Subtitle in a book. The material here is, well, can you trust a guy who can’t tie his bowtie? Elmo has just shown up. That should tell you everything.

8:19 PM: Have just asked two other press people about this, but it is apparently important enough for me to report that Elmo is voiced by a black man.

8:41 PM: Tom Wolfe is presently delivering one of the most rambling speeches I have ever heard. And that includes the crazy shit my great grandmother said after a stroke.

9:15 PM: Yes, it’s true. People are still eating dinner. No awards yet. Now I’ve covered a few of these National Book Awards ceremonies and I can tell you this is par for the course. The journalists are now talking with each other. I think that, aside from the award announcements, I will save my energies for the tweets.

9:59 PM: Patti Smith wins Nonfiction! In her speech: “There is nothing more beautiful in our material world than the book.”

10:05 PM: In a surprise victory, Jaimy Gordon takes the Fiction Award for Lord of Misrule.