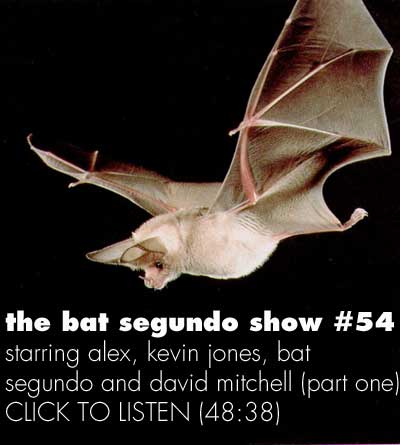 [NOTE: This is part one of a two-part podcast.]

Condition of Mr. Segundo: Responding to the crazed accusations of a major film director.

Subjects Discussed: The similarities between Jason Taylor and David Mitchell, idiosynchratic vernacular, first-person vs. third-person voice, index cards, how Granta unexpectedly kicked off Black Swan Green, the correct pronounciation of Nabokov, the difference between sandwiches in the US and the UK, the use of 1980s technology in writing, the Falkland Islands, on selecting cultural references from 1982, Friendster, the regulation of UK schools over the past thirty years, the use of visual elements in BSG, authenticity, money and Thatcher’s England, MacGuffins in novels and life, being nice to horrid people, the Julia principle, the politics of language, hip-hop culture, the threat of conformity vs. Jason Taylor’s resilience, shaking off the Murakami yoke, the Ed Park review, on using characters from other books, and naming the headmaster Nixon, and character names that “stick on the eyeball.”