Ed Park appeared on The Bat Segundo Show #211. Park is most recently the author of Personal Days. His book was reviewed today in the NYTBR by Mark Sarvas. 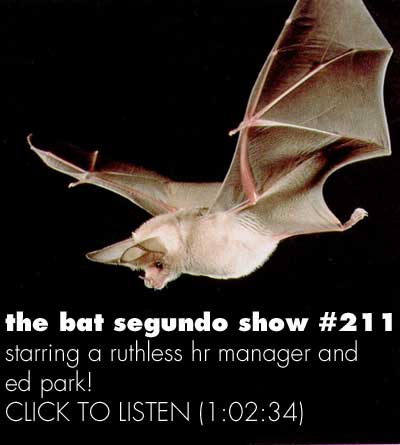 Condition of the Show: Plagued by brutal downsizing.

Subjects Discussed: Literary people named Ed, writing Personal Days and using vacation days while employed at the Voice, counting words written per day, B.S. Johnson, Jonathan Coe’s Like a Fiery Elephant, Harry Stephen Keeler, staying productive as a writer, the other Ed Park novels (The Dizzies, Chinese Whispers, The Diet of Worms, Dementia Americana, et al.), Stone Reader, lost books, writing within tight stylistic constraints, the section titles, “restructuring,” references to Hollywood and the quest for narrative, figuring out “Operation JASON,” waiting for the Eureka moment, making patterns emerge, patterns within character names and working within limitations, the use of italics, writing the third part without a period, having an affinity for exclamation points, Lester Bangs’s Psychotic Reactions and Carburetor Dung, Elizabeth Crane’s “My Life is Awesome! And Great!,” the office as a microcosm for New York, William Gaddis, Harry Matthews, Cigarettes and The Journalist, the relationship between the ability to calculate vs. the loss of the first person plural, consciousness in attrition, Joshua Ferris’s Then We Came to the End, The Office, avoiding the influence of other topical art, Crease in Personal Days vs. Creed in The Office, style vs. content, specific typographical symbols, voice recognition and gobbledygook, William Gibson’s Pattern Recognition and Gaddis’s The Recognitions, office detritus, paperclips that pierce, setting limitations when veering down dark and scatological territory, and the pathological corporate impulse. 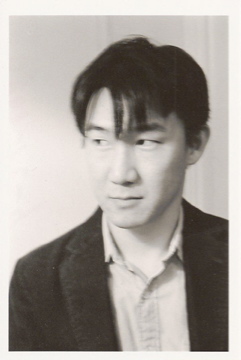 Park: It’s such a pleasure to talk to someone who’s also named Ed.

Correspondent: Yes, I know. I mean, it’s a hell of a first name. There needs to be a Society of Eds set up in the five boroughs.

Correspondent: I know. I wanted to ask you a commonplace question and then get to the nitty-gritty of this book. I know that you wrote a good chunk of this book while you were working at the Voice. But the sense I got was that you didn’t write all of it at the Voice. So I’m curious as to how much of this was written in a Voice-less setting, so to speak.

Park: Well, if you mean by “at the Voice,” while I was still employed by them, that’s true. Most of it was written before I left the Voice. I was let go at, basically, Labor Day. Right before Labor Day Weekend of ’06. But by that time, I did actually have a draft. There were many changes that I knew were necessary. I wrote it though. In terms of physical space, I could never even write my articles at the Voice. Just in the Voice office. I was hired as an editor. Basically editing, sending emails, on the phone, stuff like that. So it wasn’t really a place where, ironically enough, I could get a lot of writing done. So all the writing took place in my apartment. I was living on 89th Street. A lot of it was the same as I’d done for my previous fictional projects, where I would just try to write in the morning before coming into work. What was a little bit different about this book was that, as things got more tense at the Voice, as things really looked like they were going in a bad way, I took some vacation days, personal days, and would really treat the book as my job in a way.