Mike Edison appeared on The Bat Segundo Show #226. Edison is the author of I Have Fun Everywhere I Go. 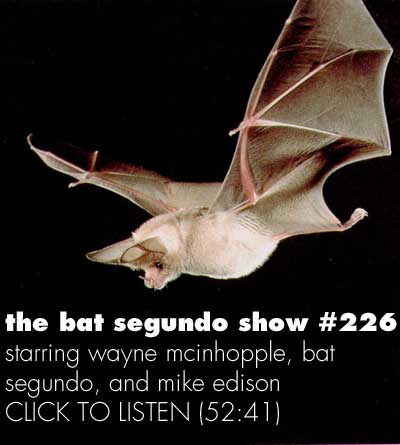 Subjects Discussed: Writing a memoir predicated upon shit-talking, sticking with the details, the lack of composite characters, compressed chronology, Heeb editor Josh Neuman vs. Screw art director Kevin Hein, Tom Cruise’s ass, The Passion of the Christ, the ground rules for satire, Martha Stewart, being married to ideas, High Times‘s Steven Hager, reality TV vs. YouTube, patience and publishing, the Chronocaster, Tommy Chong, attempting to assemble the film High Times Potluck, marijuana bribes, the cult of personality, sexual harassment, being in the gutter with Al Goldstein, the roots of High Times, editorial backstabbing, the appropriate conditions in which to get stoned, Robert Altman, stoners and color separation, Ozzy Osbourne, Edison’s career trajectory, working for a beer and soft drinks magazine, dropping out of Columbia and working as a porn novelist and getting burned out, on being bored easily, the business of High Times, magazine readership, early ambitions, Bill Hicks, the Beatles and John Lennon’s Plastic Ono Band, Ringo Starr’s first album vs. Steve Miller, and the unpredictability of life.

Correspondent: First off, you have a lot of critical things to say about a lot of people.

Correspondent: Yeah, I know. But there’s a lot of shit-talking going on.

Correspondent: And I’m wondering if this book was written out of revenge or what?

Edison: Absolutely not. I mean, you know, I feel sorry for the people who weren’t nice to me in the last twenty years of my career. But, no, this was not written from a point of view of malice. That’s not a place to write a book from. The book’s a celebration. And, of course, a few people crossed me over the years and I do kind of take joy in sticking pins in them now. I’d be lying if I didn’t say that there weren’t. But success is the best revenge. And history is written by the winners.

Correspondent: You consider yourself a success? You’re writing your own history here?

Edison: I’m on your radio show. I think there’s no greater sign of success than that.