[EDITOR’S NOTE: This article is the first in a series of brash generalizations and self-serving paraphrasing known as Mabusianism. Proponents of this philosophy must agree absolutely with each and every point, no matter how poorly framed or unfairly stretched the argument. Mabusianism will eventually serve as the philosophical backbone for Zeus Sodomized, Edward Champion’s gripping 5,000 page novel debut, which has yet to find a publisher.]

Lev Grossman, who was designated Chickenhead of the Month back in December 2004, has responded to criticisms leveled at his article, “Pop Goes the Literature”:

I loved that McSweeney’s collection! It’s astonishing to me that you could distort my point of view like that — I called the book “trashy but in the best possible way,” “remarkably pleasing,” “gorgeously creepy,” etc. 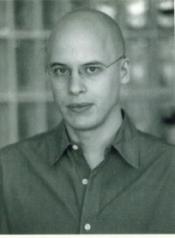 Grossman’s response is disingenuous. Since Grossman is content to place his review out of context (much like a silly movie ad), let’s recall the original paragraph:

“McSweeney’s Enchanted Chamber of Astonishing Stories skews a little trashier but in the best possible way. It has the promiscuous atmosphere of one of those speakeasies where socialites slum with gangsters in an effort to mutually increase everybody’s street cred.”

In other words, the McSweeney’s collection is an enjoyable lowbrow offering with no redeeming artistic qualities other than being a fun read. Yet another one of those nutty speculative fiction endeavors that’s meant for wild-eyed geeks, cranks and insomniacs, rather than devoted and passionate readers who don’t discriminate between genres. Further, Chabon’s collection is all about literary types obtaining street cred rather than demonstrating the breadth of their craft.

“Remarkably pleasing” is the kind of phrase (much like “Could use improvement”) that I recall seeing on report cards in elementary school, and it still suggests that horror, fantasy, or science fiction are somehow beneath the panoply of quality lit. “Gorgeously creepy” is downright redundant. Why Time‘s editors are encouraging Grossman with these dreadful modifier combos is a mystery I’ll never know.

But here’s the rub: If Grossman truly enjoyed the collection, then why did he go out of his way to be snarky about it? Why was he so interested in showing how much he hated literature by accusing Michael Chabon of being “flowery” and called Jonathan Lethem’s stories “literary in their bones, maybe too much so” (and in Lethem’s case, dismissing some of his endings as “maddeningly pointless”).

Return of the Reluctant stands by its original assessment and awards Lev Grossman a second Chickenhead of the Month Award for March 2005. Clearly, his squawking has no two-drink minimum.