Contrary to the raves and plaudits now making the rounds, The Departed is not a Martin Scorsese masterpiece, but of the so-called Leo Trio (The Gangs of New York and The Aviator being the first two installments of Scorsese’s Faustian deal with the studios), it is the most satisfying and truest Scorsese picture of the bunch. It’s telling that a slightly lesser Scorsese mob film, sizzling with the kind of punch and life that few contemporary films seem capable of these days, stands so distinguished against its multiplex brethren. And this probably answers Kevin’s bemusement over why so many critics have hailed The Departed as the cat’s pajamas. 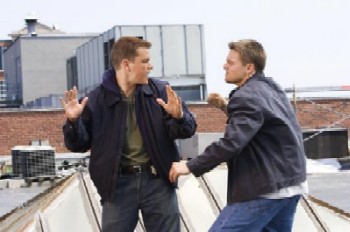 Make no mistake: this is an intelligent and engaging two and a half hour crime caper. It delivers the goods. It’s a grand kick to see Scorsese return to film with a playful ferocity. Scorsese is very much in his element here, layering his visuals with the kind of crackling detail often overlooked by today’s emerging filmmakers. Everything from the dollops of sweat congealing on Alec Baldwin’s shirt to the lowered pistol position on Mark Wahlberg’s belt has been carefully decided upon. Scorsese makes Boston his own, opting for cool blues and greens juxtaposed against a feeling of urban decay lurking beneath the antiseptic steel of upper-class life. It’s an interesting riff on Tom Stern’s use of color in Mystic River. Only Scorsese’s long-time cinematographer Michael Ballhaus could have pulled off an homage that felt so fresh.

The great surprise is that Leo actually acts in this one. Whether this is because Scorsese has, after three films, finally figured out how to manage Leo or because Scorsese cast Bostonians Matt Damon and Mark Wahlberg in an effort to get Leo to up his game is anyone’s guess. But Leo achieves a vulnerability here that recalls the Leo of What’s Eating Gilbert Grape and The Basketball Diaries that I suspect we won’t be seeing again in some years, particularly when he’s now being asked to don an unconvincing South African dialect for the upcoming Blood Diamond.

Matt Damon is, at long last, coming into his own as an actor. Like his role in Syriana, Damon plays another charming golden boy gone horribly askew. Damon has a screen quality which suggests a 1980s-era Michael Douglas in the making: the man who you can still empathize with even when his sleazy qualities come to the surface. In Scorsese’s hands, Colin Sullivan, the seemingly spotless state police officer seduced by betrayal, still keeps his cards close to his chest. Even in the film’s finale, we don’t quite know the full level of self-betrayal that this man is contending with. Even his attempt to pet a dog is fraught with meaning.

Scorsese keeps the pace going at a steady clip. The film moves so fast that it’s easy to overlook such preposterous plot elements such as the state police refusing to pull an officer off an investigation when a major figure is killed or the troublingly inconsistent behavior of Vera Farmiga’s psychiatrist. (Farmiga is very good in her role, but her presence here seems to be more “Oh shit! We have too many guys in this film! We need a token chick!”)

I should note that I haven’t seen Infernal Affairs, the film that The Departed is based on. So I have no basis for comparison. But I’d argue that The Departed serves, in part, as Scorsese’s response to Quentin Tarantino, a grand master both saluting his followers while schooling him for his puerile indiscretions. Consider the mysterious box that Matt Damon holds at the beginning, reminiscent of the mysterious suitcase in Pulp Fiction. Or the way Martin Sheen invites Leo into his home for leftover supper in answer to the half-hearted domesticity seen in the Kill Bill movies. Consider also the nuanced cartoonish nature of The Departed‘s violence, where characters are massacred in over-the-top but absolutely fitting ways, reminiscent of Peckinpah’s artistic balance, rather than Kill Bill‘s grindhouse excess.

On this latter point, I should observe that film geeks often forget that Scorsese has an almost absurdist relationship with violence in his films, starting from his student film The Big Shave and carrying on to such grandiose heights as Bringing Out the Dead (a film which I will confess I misread on my first viewing, only to discover that movie’s almost Moliere-like approach to the “New York as hell” metaphor). From the moment that Leo deals with the “men from Providence” shortly after finishing up some pasta, I was seduced by The Departed. It is violence that triggers the cracks of the film’s two central characters, much as it reveals the class-based chasms of the world around them. (How does Damon secure a capacious apartment with a “co-signer” anyhow? I think the answer’s in that box.)

I’ve made no mention of Nicholson, but I would contend that had De Niro occupied the role of Costello, the film could have easily dwindled into camp. And while this film needed a superstar heavy, I was more interested in Leo and Damon.