Some culinary skills come late in life. But they do, in the end, arrive, if you are pigheaded enough. (Of course a desire to feed people is a great motivator too.) 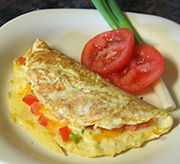 As I reported rather discreetly back in September, I finally figured out how to make a pretty tasty omelette. Yes, I learned in my early thirties. But in my defense, I should note that on the breakfast front, I had the scrambled eggs, pancakes, and onion-potatoes thing down pretty well — in part because I worked as a short-order cook in my early twenties. (The manager, discovering my ineptitude, eventually stopped giving me morning shifts. Which was fine back in those days, seeing as how I was dilatory and frequently hungover just after sunrise back in those days. I’ve since taken to getting up very early in the morning to get a good start.)

But there were also ancillary factors. During my early twenties, as a last resort, I used my crude breakfast making skills as a desperate bargaining chip to get into bed with women. It worked twice, although in both cases the women in question were somewhat inebriated. Maybe they just felt sorry for me. This was one of the reasons I related to Pirate Prentice’s Banana Breakfast in the early pages of Gravity’s Rainbow. It seemed stemmed from the same hapless masculinity.

But the omelette thing befuddled me. Until recently, when I became determined to eat the majority of my meals in rather than out.

So that other anonymous souls suffering this same problem might be granted succor, here are some helpful hints.

First off, you need to make sure that you have a good egg base. And this means having a good omelette pan. My sister, knowing of my ontological omelette imbroglio, was kind enough to give me a Calphalon 12-inch pan for my last birthday, and the slick non-stick surface, carefully buttered, makes whipping up and cooking an omelette easier than if you have a standard issue shitty frying pan. One other thing about the omelette pan. It’s great for a well-cooked four-egg omelette, which you can then slice delicately down the middle and serve for two. So if you’re serious about omelettes, get this pan. Plus, it has a thick oblong steel handle that makes you feel as if you’re driving a fucking sports car or something. And if you’re thinking that this is some kind of scam, it isn’t. You can use it for other things. It’s also great for chicken quesadillas.

Now you need to be absolutely scrupulous about cooking the egg. And you can do this quite fine with a fork. You bat down the light rising bubbles with the back of the fork, while gently scraping the cooked edge away from the side. When you see a well-cooked edge, be sure to tilt the pan so that the egg on top will flow just underneath the egg. The fork is handy because you’ll be able to lift the congealed egg and that’s where the magic happens!

Keep doing this for a while until 90% of the uncooked egg are underneath the edges. If you’re thorough like me, you’ll want to lift up the entire elliptical perimeter and make sure it’s all cooked. (Plus, this will help when you get to the tricky flip.)

You’re going to need a good deal of cheese to lay down. Ideally, if you shred some gouda or some feta, you’re in for a tasty breakfast! A smidgen of fresh, meticulously ground parsley goes with this well too, although you’ll probably want to mix this into the base. But be sure that you have enough cheese! Because this cheese is going to save your ass when you get to the inside of the omelette.

Now the tricky part. The filling. In my early omelette experiments, I was so eager to make a great omelette that I often employed too much zeal here, and I learned some harsh lessons in applying grand dollops down the middle. Be sparing here. Because if you have too much filling, then it’s going to be a pain in the ass when you flip the egg over. And not only that, but you’re really going to need to make sure the inside of the omelette is cooked, with the cheese melting into it magically.

You may need to make about two or three omelettes to get the filling-to-egg ratio right, but once you have this down, your omelette will rock.

Then you’ll just want to keep the puppy cooking. But don’t leave it one place. You’re going to want to move the omelette around every minute for presentation purposes. After all, the last thing anyone wants when eating an omelette is a dun-colored bottom. But you will need to cook this thoroughly. When you see some thoroughly melted cheese emerging from the edge, chances are you’re done.

And voila! A grand omelette that should keep you going until the early afternoon at least!

The whole thing costs maybe $3 to make. A few bucks more if you want to get extravagant. Throw in some potatoes, some fruit, a toasted English muffin with grape jelly, and you’ll have yourself a grand breakfast. (And to think, they’re charging $10 for this racket at a diner!)