As I continue with this casual series of album writeups, I should note that it was the one and only Tito Perez who got me hooked on The Unicorns’ 2003 album, Who Will Cut Our Hair When We’re Gone? I should have known what I was getting into.

After all, The Unicorns are indie and Canadian. These two qualities, combined with the recommendation from Tito, should have alerted me to this album’s addictive dangers. 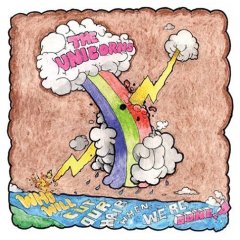 Let us ponder the North American music situation. Canadian indie bands have, over the past six years, shot farragoes of catchy melodies across the 48th parallel. This is not what the NAFTA architects had in mind. It may be penance for all those Anne Murray jokes. It may be because they empathize with us and want to give us gifts or they find our obsession with ad hoc brother-sister garage band acts tedious. But whatever the motivation, I believe this will continue, so long as the border remains loosely protected and the American music geek’s ear remains attuned to 1980s nostalgia.

With insouciant folly, I dug in like some gecko slithering down a King Cobra’s gullet, not knowing that I was roasting in some burning mad digestive tract, somewhere betwixt a concept album gone slightly awry and a mildly amped up incarnation of the Decemberists.

Behold, a precis for each and every track:

We begin this album’s obsession with death (or, perhaps more specifically, the quality of a haircut in a morgue) with this persipcacious song title, which begins with a lethargic whoop of electronic nonsense and sputtering drums, which suggest to us that, fresh from the gate, the Unicorns are on their last legs. From here, we begin to a languid piano bang with perhaps most rudimentary bass-snare beat heard since Trent Reznor penned a little ditty about copulating his listeners like an animal. Adenoidal vocals rise and fall, often in funny voices, sometimes cloaked in layers of processing. And the question becomes whether this is one really fucked up concept album or a process of viewing life through a backwards prism. Is the beginning of life at the opposite end of the album? And why thirteen tracks? Do these guys really consider themselves so unlucky? Or are they just morbid as hell?

So we (or, rather, the Unicorns) are dead by Track No. 2. One wonders if modifiers are purposefully misspelled in this afterlife. The ghost’s theme, which sounds as if it’s been lifted from the 8-bit NES game Ghosts N Goblins, tantalizes us, before the singer tells us, “Tuff ghost, tuff crowd, tuff love / Sit down Sit down Sit down.” Aha, so this is about the audience. A riff on being gratefully dead?

“I’m a strong dead man looking out for himself.” Then it’s clear. The Unicorns could care less about what their audience has to say. This wins considerable brownie points.

After an opening that sounds like a tot playing a cheap Casio synthesizer somewhere in a suburban Connecticut home, we get the most positive song thus far: a crazy little slow tune laced with self-pity. No love for the Unicorns apparently. But why? Arpeggios are strummed and we eventually hear a series of samples involving metal dropping in the background. But if the ghosts are ethereal and if we are at the summit, does not the corporeal lose its form. It’s a tricky aural conundrum and one listens to the track again and again hoping for an answer.

The beginning of this song informs you that, much like a Society of Creative Anarchronism meeting, you are very much in a non-electronic world. At this point, the guitars kick in and there is a stunning paucity of synths. Holy cats, these Unicorns have shifted their entire style a mere four tracks into the album! But is this in response to the cold ghost audience alluded to in the last few tracks? Whatever the case, this tune’s a solid rocker.

Could it be? The possibility of life returning with the crazed sputtering electronic opening? Or a return to the form established on the first four tracks? After three songs about ghosts, we’re now dealing with what’s left over: namely, the corpse. But it’s decidedly cheerier than contemplating ghosts.

“Checked myself into emergency urgently / Drove up in my bone-camarrow thinking only about you.”

At this point in the album, I think the Unicorns are going to split listeners into two types: those who appreciate corny puns and those who don’t. I obviously fall into the former.

Perhaps this is the cause of death for the members of the band. Or maybe with the whiny voice urging us to “clap your hands,” this is an homage to Clap Your Hands Say Yeah Yeah bandleader Alec Ounsworth. But this is obviously not true. The Unicorns put out this album two years before Clap Your Hands did. Is it possible that Ounsworth and company ripped off the Unicorns?

And what are we to make of the faint “Hoo!” that opens up this track? Is this a ghost? One listener in the studio? One might make the case that this “Hoo!” falls in line with how some guy driving 80mph down an interstate in a “bone-camarrow” might react if he were (a) listening to this song and (b) realizing that someone was referring to his snazzy set of wheels as a “bone-camarrow.”

This then is a bit of a lullaby. A response to the Beatles’ throwaway track “Good Night?” The jangly guitar instead of the orchestra? And what of the egg shaker? Time is running out to impress! And yet the Unicorns have already done this in droves. “Are you visceral viscous?” Why, yes. Thank you for asking. Then all this is thrown into disarray with a Tommy-style dialogue involving the fan and the star, with considerable enmity expressed by both parties. This then is the fleeting underbelly of indie rock.

The tune opens with a radio dial going all over the place. We hear smatterings of that questionable territory coveted by many an emerging band: the radio. So will the Unicorns “get known?” Is this the right decision for them? And will they surrender their credibility? These aren’t exactly complex rhetorical questions. They are very much already answered for us. The closing warble effect provides the answer.

Perhaps there’s something to the near rhyme of “known” and “born” (the last track, let’s recall) which suggests that any interconnectedness to this album is incidental. Perhaps Track 9 represents the second of two alternatives for the emerging indie band, with Track 8 a more subtle take on Reel Big Fish’s breakthrough hit. The salient observation: The Unicorns are more than horses. They are people too!

We return to the abbreviated “tuff.” Now the misspellings have spilled into nouns. The two “Heys” at the beginning — these are more pronounced than the “Hoo” of Track 6. But it takes some creativity to throw in a violin with a call and response. But is the didactic aside about Iran a parody of the self-conscious politics employed by other indie bands to garner streetcred?

The jangly barres at the beginning suggest a reggae element gone largely unfulfilled. The incompleteness here extends to some five minutes and eighteen seconds, with a lazy tremolo upturn thrown in for good measure.

Since these guys are Canadians, I was expecting a French reference at some point. But those woos, inter alia, near the end — are they really so French?

But wait a minute. I thought we had escaped death here, Unicorns! Is the record itself ready to die, seeing as how this is the final track? Well, what if we, the ghostly audience, have mixed things up? What if we’ve put Who Will Cut Our Hair When We’re Gone? in a five CD changer with a bunch of other CDs? What if we’ve, god forbid, thrown this track on a mix tape?

You can’t get away with this, Unicorns! You simply can’t! Not even with the sudden finale! Not even…