A Special Slate Diary by Chewbacca
Translated from the Wookie Language 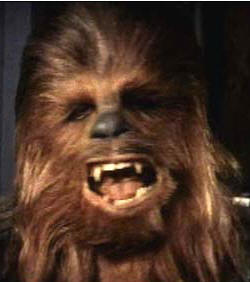 For 28 years the judges in the Mrs. America Paegant have awarded a tiara to strange attractive humans who happen to speak English. I’ve never understood this. I understand Han Solo’s endless kvetching, even when he calls me a fuzzball, but not this obsession with hairless beauty. But what the hell, I like to laugh from time to time. Although I am not the hairiest Wookie on my block, I am married and I am a Wookie. So I decided to experience what it’s like to enter a beauty paegant that I had no shot at winning.

“Let the Wookie win,” they say. I suppose it’s because I’ve been around for about two hundred years. You might say I’ve picked up a few things. How to flatten an Imperial soldier, how to roar in a way that’s aggressive yet somewhat endearing. The advice that immediately applies here, particularly to holographic chess, and which might give me a leg up in this paegant is that, if you pull the other contestant’s arms out, then you have a better chance of winning.

But when I filled out the Mrs. America online application, which asked for my name, address, amount of hair on my body, I let out a roar and smashed the computer monitor.

I was almost certain to lose. For one thing, I’d probably be a lot taller than the other contestants. For another, well, with all this hair on my body, it was a bit difficult to go drag.

I decided to give the Mrs. America Paegant people a call.

“Rwarrrrrrr,” I asked in a gentle voice.

“Who is this? What’s your operating number?”

“Rawwwwwwwwrrrorororororrrorrrawwwrrr,” I said in my sweetest voice.

Then there was a click and the line went dead.

It’s not wise to upset a Wookie.

(Thanks to Jimmy Beck for the lead.)