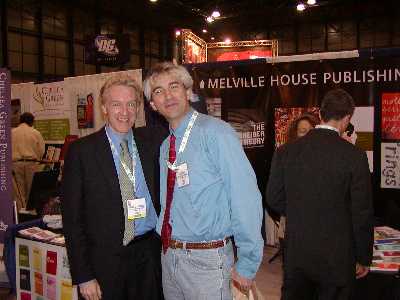 [ABOVE: Dennis Loy Johnson and David Kipen, in front of the Melville House booth.]

I spoke to Dennis Loy Johnson, Valerie Merians and David Kipen. It seemed that Melville House was the convergance point. More to come about what we talked about, except that Kipen has a very ambitious idea in an upcoming book (and I, as a gentile, have a horrible memory for words that begin with “sch” — fortunately the good and remarkably energetic Kipen didn’t hold this against me) that boldly challenges the auteur theory.

Believe it or not, I also shook hands with Jessa Crispin, who I ran into by chance at the Melville House booth. She left before I could talk with her further (my fault, because I ended up speaking with Kipen for quite a while). But let it be publicly stated that, as a gentleman who thinks petty rivalries are silly and largely ignores these things, I openly offer my hand towards a detente against all perceived offenses on all sides. The question here is whether or not Ms. Crispin is equally willing.

On the floor, there are numerous publishers of many stripes. Everything you can imagine has found a way to be published. I’m not sure where I stand on the grand irony of a Caucasian publisher profiting in “history” written by Black Muslims (i.e., the Farrakhan crowd). But that’s the kind of fringe stuff you find in the back.