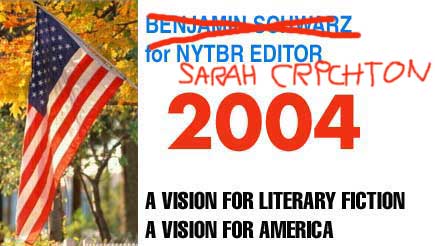 For those voting in the Southern primaries tomorrow, remember that there’s only one person right for the NYTBR editor slot.

True, the NYTBR race has little to do with a boring predetermined primary race. But don’t let that stop you from writing an angry letter to Bill Keller, urging him to hire Sarah Crichton as the new book reviews editor and to keep it smart and literary. Send those letters to:

Be sure to include the phrase, “If you let the Times book coverage go to hell, then how can you shower convincingly?”