The new workstation went operational at 2 AM. Three bottles of beer were consumed during the course of its construction. 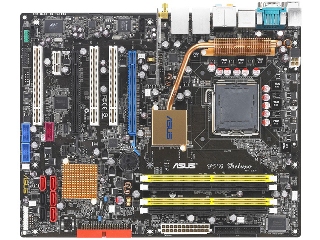 My previous motherboard, whom I had referred to occasionally as “Fred,” had fried. And the reason it took so long for me to replace it was because I discovered that SATA had replaced IDE, PCI-Express had replaced AGP, LGA775 had become the standard Intel configuration (with the pins now on the mobo, instead of the CPU), DDR2 had replaced DDR (and more pins had been added to the memory sticks). Even the needs of the motherboard had changed. Not content to merely process bits of data, there was even a voice recognition jumper just behind the DIMM banks that allowed me to order Thai food.

All this over a matter of three years.

In short, after a fruitless search for a replacement motherboard (“Out of stock,” “You’re still using that chipset?,” et al.), I was forced to start pretty much from scratch. The good news is that this new system will probably last me about eighteen months before it goes completely obsolete.

The new box I built is equipped with a snazzy Asus P5B Deluxe, a 3.4 GHz PentiumD*, and 2 gigs of 800 MHz memory. This probably means nothing to you, but it means a good deal to me. I can’t be content to have someone else assemble a system for me. My tactile contact with the insides might allow the computer to understand me and not crap out on me so much. I took Fred’s death very personally. Who knew that our love affair would end in his suicide? I treated Fred very well. I even sang to Fred. And he decided to fizzle out. Perhaps he couldn’t handle my MP3 collection.

But the new box is much faster. It accesses the Internets. I need to tweak a few things, but it currently recognizes two of my three hard drives (and there’s room for six more). I still miss Fred, who now sits collecting dust in my closet with other obsolete computer parts, but I’m hoping that Natasha (the name I have applied to the motherboard) will provide me with a few years of comfort in the late night hours.

The upshot is that podcast production will begin anew very soon because of these developments.

* — If you think I’m shelling out more than $200 for a Core 2 Duo when the price will bifurcate in a matter of six months, you’ve got to be fucking kidding me.