The Longest Yard (1974): I can just envision the studio execs sitting in the boardroom:

“Yes, but screw the nepotism. We think this script will sell like gangbusters.”

“Well, Chuck, that’s exactly what I was thinking.”

“What’s Bob Aldrich been up to? I was having lunch with him the other day and he’s looking for another project.”

“Well, not much since The Dirty Dozen.”

“What if we took the Dirty Dozen formula and crossed it with this Bad News Bears thing?” 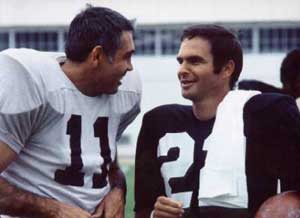 “Not if we cast another Burt in the role.”

“Are you thinking what I’m thinking?”

“Hey, my wife subscribes to Cosmopolitan. I just read it for the articles.”

“That Burt Reynolds is something, isn’t he?”

“Well, if he’s hot stuff with the ladies, this will give us the cross-demographic appeal we need.”

Or something like that. It’s safe to say that The Longest Yard has one of the silliest premises I’ve ever heard of. Burt Reynolds plays a former pro football quarterback who beats the tar out of his girlfriend (the nature of the relationship is nebulous at best, but it’s safe to say Burt won’t be sending her a box of chocolates anytime soon) and then decides to go on a drunken joy ride in her Mazerati, empty glass of bourbon near the stick shift, getting into a car chase with the police. He dumps the car in the harbor and then gets into a bar brawl with police officers.

Before you can say Cool Hand Luke, Burt’s in the joint in an unspecified area of the South. He’s working detail, dealing with racist but apparently good-hearted guards. He rolls in the mud with one fellow prisoner. Another inmate has a crush on him, performing one-armed push-ups and various other exercises in an effort to get Burt swooning. The prison warden then cuts Burt a deal to QB a football game between the inmates and the guards. Burt is free to pick the teammates he wants and apparently train them without a single guard in close proximity.

One character, The Caretaker, is taken on as team manager. The Caretaker, a fat-faced man with little in the way of screen charisma, is apparently so skillful at acquiring contraband goods that he’s able to get joints, liquor, deluxe fruity foods, prison team helmets, and a 15-minute “pesonal services” visit with (really, I couldn’t make this up) an uber-beehived, pre-Pennies from Heaven Bernadette Peters. Peters is not only the warden’s secretary, but she apparently learned a few tricks in Tallahassee.

As absurd as this all sounds, believe it or not, The Longest Yard is a fairly enjoyable film, even with the “modern film effects” provided by Steve Orfanos. (These “modern” effects are hastily cut split-screen effects for the climactic football game. They’re mercifully brief, somewhere between the heights of Brian De Palma at his best and the lows of More American Graffiti and Woodstock.) Lest we forget, the Prison Movie and the Football Movie have pretty much operated on the same basic formula. Get a bunch of rough-and-tumble guys, have the audience root for their inevitable victory, and keep the movie going with some general, but crowd-pleasing narrative arcs. It makes perfect sense to conjoin the two genres. In The Longest Yard‘s case, that means at least a few deaths, a couple of token scuffles, the obligatory gentle giant, a few 1970s “Ebony and Ivory” moments, and even a mentally disabled man, who reacts to Burt’s invitation to play football by throwing large bales of hay into the air.

The silly formula doesn’t preclude The Longest Yard from espousing a few subtextual points about honor. There is, however, one disastrous turn in which Burt offers a fabricated story about his father.

The unfortunate thing is that Adam Sandler is set to remake this movie with Anger Management director Peter Segal, scheduled for release next year. The Longest Yard is hardly a movie that calls out to be remade. I can’t imagine how the Sandler-Segal combo will recreate the original, particularly since prisons are hardly as innocuous today (in image, at least) as they were back in 1974.