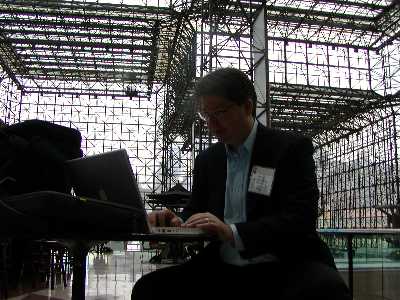 The above picture is the hard-working Bud Parr. The two of us are here at the Jacob Javits Convention Center figuring out the wireless setup. And it looks like all systems go.

I’ve attended a panel on blogging (a portion of which will be podcasted upon my return to San Francisco) and I’m hitting a few more today — all this on about 30 minutes’ sleep.

My efforts to make the acquaintance of Sam Tanenhaus backfired. Tanenhaus ran away before I could say hello. However, Ben Schwarz was a very personable guy.

But enough of this hobnobbing. You want real news and I’m here to give it.

Last night on the plane:

Using stealth detective work, I have determined that I am at least one of three people on board this JetBlue flight going to BookExpo. Sitting two rows ahead of me is a woman with colorful hair who “has a book out” that she sold at BEA last year. To her left, across the aisle, a gentleman who is also heading there to pitch “earthware.” Unfortunately, my peripheral hearing is dampened by two very nice yet very noisy kids. So I only have telling details to go on.

“A book goes through a two year process.”

“I sort of…stumbled into writing.”

This writer, who also has interesting fingernail polish, is like many a San Francisco professional, an ex dot commer and someone who apparently stumbled onto writing by accident.

I’d say hello, but there’s two problems: (1) I’ve got a window seat and the other two seats in this aisle are occupied and the plane is about to take off, and (2) I sort of relish this James Bond stealth.

Anyway, there are more important things to consider. Namely, how I will sleep during the next five hours in a cramped JetBlue plane. I just got off the phone with my sis and told her that I could sleep peacefully on a bed of nails. This, of course, is braggadacio.

Right now, I’m highly amused by the bespectacled, black-haired man who knows nothing about the book industry, who didn’t come on with a tome beneath his arm, and who has one of those staccato titters (hehhehehehehehehooohooohaaaaaa) that’s meant to establish bonhomie. I like this guy and I hope the writer gets him hooked into the magical world of books.

Max Millions showed up as promised in an alluring costume. I arrived late to the panel because I had just disembarked from a red-eye, but there seemed to be a confusion over what the role of blogging entailed. Many publishers in the crowd failed to understand that blogging was conversational in tone. Max Millions pointed out that you could smell the passion and that it was clearly distinguishable from sheer shilling. MJ Rose noted that she had seen hits rise on her blog, but had not seen an increase in comments. But she suggested that publishers might wish to adopt a blog-oriented catalog for their books.

One of the problems with the panel was that there’s still a fundamental chasm between bloggers and publishers. The publishers were more concerned with how they could use blogs as marketing tools. But when I heard the name Dan Brown name-checked (instead of, say, William T. Vollmann, an author who perhaps deserves more attention and whose sales could be boosted using the litblog conduit), I realized the disparity goes well beyond marketing and art, and more between cash bonanza and the kind of special literary niches that many litblogs are all about.

I’ll have more on this later when I post the MP3.