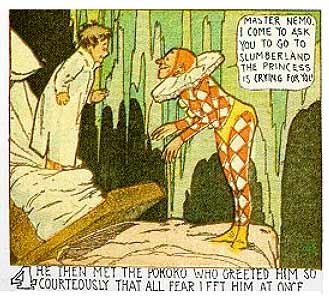 I will have more to say at length about Winsor McCay and, specifically, Checker Publishing’s reissue of The Dream of the Rarebit Fiend later. For now, I direct you to Josh Glenn’s slideshow, depicting McCay’s influence upon other filmmakers, and this website for the book. And I must also direct you to this interesting tale concerning “Gertie the Dinosaur.” The story goes that, sometime around 1913, another newspaper cartoonist bet McCay that he could not bring a dinosaur to life. McCay then came up with this groundbreaking animation in 1914 (YouTube). Note the attention to detail in the movement and the very fluid detail in the way that Gertie investigates the elephant. There is also Derik’s tribute to McCay from last year, in which he examines McCay’s use of page layout and sequence in relation to Little Nemo in Slumberland. There is also this explanation from Ulrich Merkl, which explains precisely how The Dream of the Rabbit Fiend was restored for publication. There is also this odd audio dramatization, which attempts to render McCay’s universe into oral form. There is also lost McCay art found not long ago, with stunning colors and efforts at restoration. There is also McCay’s response to Clair Briggs’ 1926 questionnaire. If you are fortunate enough to be in Ohio, there is this McCay exhibit for your edification. There is also a DVD available of McCay’s animation.

The upshot is that if you have not heard of Winsor McCay, it would behoove you to check him out immediately.