A good number of Charlie Rose interviews are now available through Google Video. (They had previously been available for $1.00 per view, but Google has since added video ads, making them free, and helpfully demarcated these ads through blue dots on the timeline.) 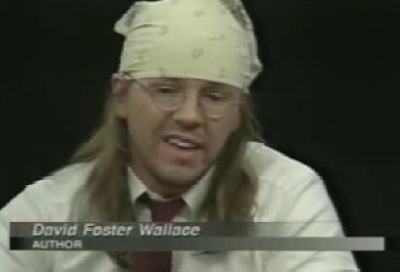 What this means, of course, is that the infamous DFW interview is now available. If you haven’t seen it, this is the interview in which Rose, who doesn’t seem to have read much of DFW’s work, asks DFW (wearing, believe it or not, a bandanna and shirtsleeves) about everything but his books. DFW comes in at the 23:17 mark.

It’s the telltale indicator of how low the literary journalism bar has fallen (compared with, say, the Dick Cavett shows of the 1970s, where Cavett or his researchers actually read the damn books) — a veritable train wreck and a true revelation of Rose’s illiteracy. A visibly uncomfortable DFW is bullied by questions that pertain to David Lynch, with Rose boasting about interviewing Lynch instead of talking about DFW’s work. Rose’s ignorance is astonishing, particularly as DFW educates Rose about the history of postmodern literature.

And this was only ten years ago.

[RELATED: Here’s Dave Eggers from 2000 (at the 25:38 mark), just as A Heartbreaking Work of Staggering Genius became a success and in the early stages of developing the humorless temperament we all know him for today. Early on, Eggers remarks, “I thought [the title] would anger the right kind of people.” Eggers angering people? Who would have thought? That’s not what McSweeney’s is about!]