Two recent films — both with problematic scripts — reveal just how a director can rise and fall in relation to his material. Neil Jordan’s The Brave One was a greater treat than I expected: a slightly satirical and strangely sincere chronicle of revenge, guilt, and empathy in the post-9/11 age. (If this interpretation seems a bit of a stretch, consider the moment in which Jodie Foster is sitting in the waiting room after the cops have coldly told her that they’ll get right back at her with her case. Not only is an American flag mounted on an adjacent pole, but the wall behind Foster is composed of an American flag. Jordan’s concern with the horizontal axis continues with a fixed shot of cops arguing about who the vigilante killer might be, with yellow police tape representing the new flag of what America has become, as well as the manner in which Erica kills one of her victims in a bodega.) 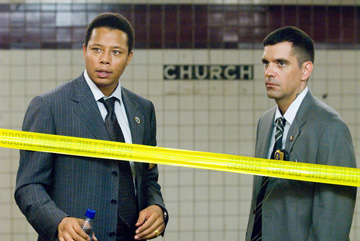 Jordan, as I recently suggested to a friend, is the Irish Brian De Palma. He is wildly inconsistent. For every gem like Mona Lisa or The Good Thief, there’s a turd like In Dreams or High Spirits. But when Jordan is on, and he certainly is in command of his faculties in The Brave One, he offers stunning visuals, symbolism both explicit and nuanced, and the kind of cinematic experience presenting the kind of behavioral subtext reminiscent of a D.H. Lawrence story. Neil Jordan is that rarest of contemporary filmmakers: a man who presents literary tropes within an entertainment. And I suspect this is one of the reasons why The Brave One has been underappreciated.

Pay no attention to the script, which offers an unpardonable finale and even a gratuitous flashback to the early days of a woman’s engagement with a doctor (complete with the doctor playing guitar!). Let us instead consider the sneaky things that Jordan does. This is a vigilante movie and there is talk of Erica (the woman in question) crossing the line. So what does Jordan do right before the regrettable events that cause her love David’s death? Visually, he does indeed cross the line. We see Erica and David in the park where the violence happens — the aptly named Stranger’s Gate. Suddenly, Jordan breaks the 180 rule and we see the happy couple from the other side. When Erica’s horrible injuries are being attended to, Jordan intercuts between the happy couple making love and the doctors operating on Erica, with cross-cutting of identical body positions. Jordan is also wise enough to throw Erica into hard focus, with the background often soft around her. He tracks inside Erica’s apartment, with gauze and curtains often occluding our view of her. The line is likewise vertical, as Jordan sways his camera daringly from left to right in a disorienting state as Erica is attempting to wrestle with her new existence.

If The Brave One is a mere exploitation film, how can we deny these visual flourishes? What also of Foster’s convincing performance as a tormented victim? 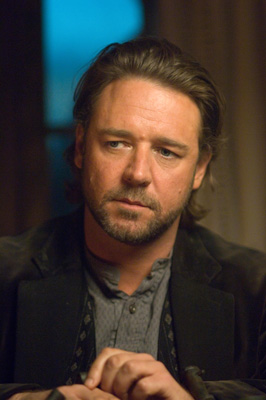 By contrast, James Mangold is not, I suspect, a literary man, if his cheap homage to Sam Fuller (hardy har; one of the men recruited is named so) is any indication. 3:10 to Yuma has received the kind of praise suggesting that it is this decade’s answer to The Unforgiven, but I found its Western atmosphere too clean, very Hollywood, and mostly unconvincing. I pined for more dirt and blood, and even convincing makeup when a bullet is removed from Peter Fonda’s corpus. I longed for the Westerns of John Ford and Howard Hawks. Token depictions of the Chinese laborers on the transcontinental railroad are of help, as is Ben Foster’s excellent performance as Russell Crowe’s head henchmen. But Mangold would rather rip off images from Leone’s masterpiece Once Upon a Time in the West (the horsemen in the distance, the train station, et al.) and have his composer Marco Beltrami replace Morricone’s choir with synthesized nonsense. The film’s plodding first half is redeemed by a so-so gunfight near the end. But the chief problem with this film is Russell Crowe, who cannot enter a shot without mugging for the camera and seems to be under the mistaken impression that he is Henry Fonda’s Frank. The character of Ben Wade required an actor who carries both the charisma of someone who could convince his underlings to perform despicable deeds and the heartless manner of a cold-blooded villain. Crowe fails on both counts.

Christian Bale is wasted. Peter Fonda is the token Grand Old Actor. In an era in which Deadwood has recently graced television screens, 3:10 to Yuma lacks the multi-dimensional qualities that I feel are necessary to the Western. Doc Potter may as well be some throwaway single-episode supporting character from an old Bonanza episode. Gretchen Mol is, as always, very beautiful, but her character is merely a Puritanical cliche.

This is a Western made by filmmakers who know very little about how the Western demands moral arguments, along the lines of The Ox-Bow Incident, Red River, and even Rio Bravo. What we get instead is a garden-variety tale of redemption. But if the cinematic Western is to make a resurgence, and I certainly hope that it will, then the films hoping to reinvent the form need to be something more than disposable entertainments.