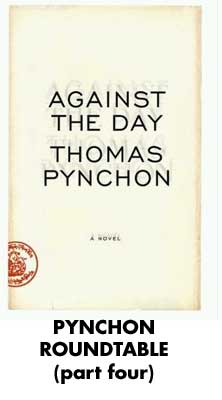 The New Chums of Chance, aided by associative penchant and a perfervid desire to ferret out reference, continued their journey, hitting beyond Part One and, with Colonel Bud Parr beginning to see references to the Bible and Eliot, settling into the firm fields of Part Two:

“But after thy hardness and impenitent heart treasurest up unto thyself wrath against the day of wrath and revelation of the righteous judgment of God” (Romans 2:5)

My reading of Part 1, “The Light Over the Ranges,” and early Part 2, “Iceland Spar,” has me coming back to the idea of faith in all of its manifestations. Faith in the Old Testament sense of an apocalyptic fear; Faith in anarchism, Faith in science and technology; magic and pagan rituals and of course Faith in money and materialism, particularly as the book opens on the 1893 World’s Fair, which, as one commentator on that event said, was a dry run for America’s “consumer based society.”

Each of these manifestations appear to be represented by a major character. When the anarchist Webb Traverse shrugs and says “Sufficient unto the day” on page 96 he echoes Saint Matthew (6:34):

Taken with the quote above where “against the day” is bookended by the word “wrath,” Webb stands as a polar opposite to the capitalist Scarsdale Vibe and the distinctly American optimism of the Chums of Chance who are surrounded by Christian symbols, including, on page 14, “Jacob’s ladder,” which is used literally as a ship’s ladder, but also is a well known symbol from the Bible (Genesis 28:12):

“And he [jacob] dreamed, and behold a ladder set up on the earth, and the top of it reached to heaven: and behold the angels of God ascending and descending on it.”

“‘It wanted us to know that we, too, are here on a pilgrimage….When all the masks have been removed, it is really an inquiry into our own duty, our fate…As the Franciscans developed the Stations of the Cross to allow any parishioner to journey to Jerusalem without leaving his church grounds, so have we been brought up and down the paths and aisles of what we take to be the all-but-boundless world, but which in reality are only a circuit of humble images reflecting a glory greater than we can imagine – to save us from the blinding terror of having to make the real journey, from one episode to the next of the last day of Christ on Earth, and at last to the real, unbearable Jerusalem.’”

With all the talk of alternative universes in this book and clouds of apocalypse hanging over it, the fictive Chums – who do show up alternatively on page 214 as fiction despite interfacing with other “real” characters like Lew Basnight – seem to me to be something like King Arthur’s Knights of the Roundtable with perhaps Blundell as the virginal Galahad himself.

The Chums’ airship parallels the original “Quest of the Holy Grail,” (the original, not the Mallory) which is a tale of overt Christian symbolism, with its itinerant heroes who find themselves meeting challenges on a quest that is initially unknown to them. Ships play a large role in the original Quest too.

It’s interesting that Max said reading Pynchon is like reading T.S. Eliot because it is Eliot who led me to reading “The Quest for the Holy Grail” and Jessie Weston’s “From Ritual to Romance,” which relates the quest for the holy grail to its ritualistic roots and could also be for interesting ancillary reading alongside Against the Day.

Of course, picking a theme like I have could be dangerous territory because it seems to me that once you go mining in a Pynchon novel you start finding things where they may or may not really exist. The inscriptions that pop up everywhere in Against the Day are confusing, but also seem to point toward something. The Dante quote inscribed before (I think) New York City on page 154 “I AM THE WAY INTO THE DOLEFUL CITY” — which we know ends (frustratingly not here) with “Abandon Every Hope, All You Enter Here” — seems to be a signpost. Of the city that this inscription stands before, which underwent an “all-night rape,” Pynchon says in one of his occasional flourishes of sensuous writing:

“Out of that night and day of unconditional wrath, folks would’ve expected to see any city, if it survived, all newly reborn, purified by flame, taken clear beyond greed, real-estate speculating, local politics – instead of which, here was this weeping widow, some one-woman grievance committee in black, who would go on to save up and lovingly record and mercilessly begrudge every goddamn single tear she ever had to cry, and over the years to come would make up for them all be developing into the meanest, cruelest bitch of a city, even among cities not notable for their kindness.”

I say it’s a signpost because the story surrounding this city seems confusing as it pops out of nowhere and recedes into the background of the novel just as quickly, yet stands in contrast to the opening scenes of Chicago’s World’s Fair and captures the connection between a wrathful apocalypse and the Christian journey that Dante had just embarked upon in Canto III of The Divine Comedy, which like “Against the Day” reaches back into pre-Christian elements along its path and challenges Dante in his judgement of others. The passage in the Bible right after the one I quoted from Webb above reads:

“Judge not, that ye be not judged. 7:2 For with what judgment ye judge, ye shall be judged: and with what measure ye mete, it shall be measured to you again.”