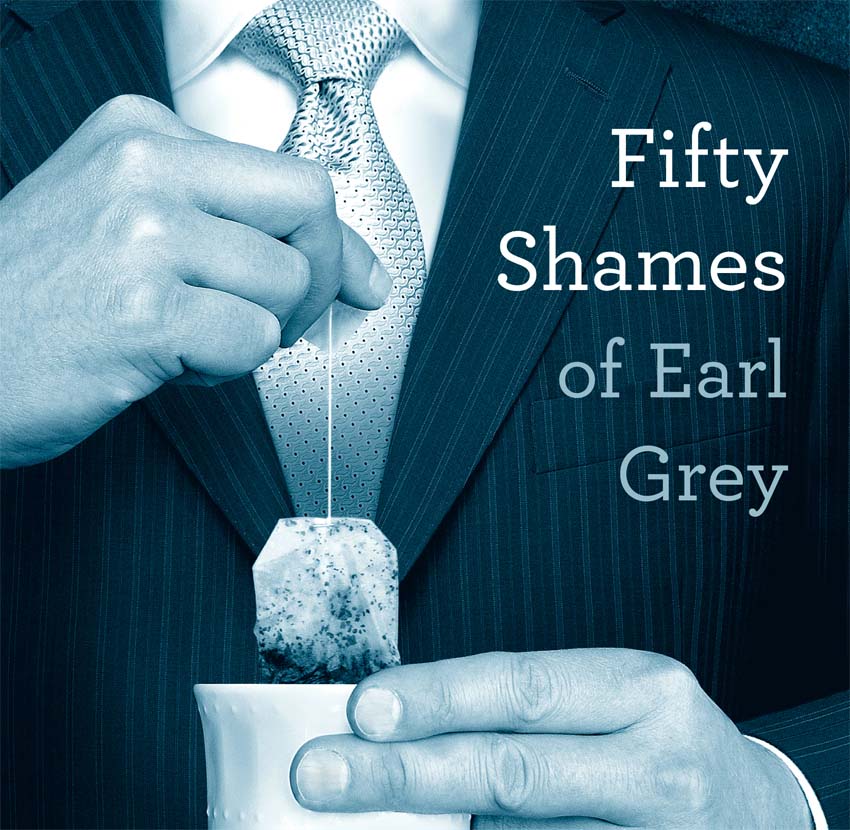 Andrew Shaffer is most recently the author of Fifty Shames of Earl Grey.

This episode of The Bat Segundo Show is brought to you by Audible.com. If you want to listen to Fanny Merkin’s Fifty Shames of Earl Grey, and help keep this show going, sign up for a free audiobook and a 30 day trial. Use this handy link: http://www.audiblepodcast.com/bat

Condition of Mr. Segundo: Being seduced through parody.

Correspondent: You’re a man of many identities on Twitter as well.

Shaffer: Yes. Yes. So it really felt natural to write under a different voice and just assume a different role. So it came pretty naturally.

Correspondent: So do you require multiple identities to go about your life? Do you require self-deception and various disorders in order to function as a creative artist? An emerging voice of our times?

Shaffer: (laughs) It’s interesting. I never had before I got online.

Shaffer: I never did experiments with pen names or alternative identities or anything. I was pretty sure I knew exactly who I was.

Correspondent: And then the Internet came along and had you constantly questioning yourself.

Correspondent: You turned into Lon Chaney.

Shaffer: Yes. I just portrayed this different face to everybody.

Correspondent: Except it was through words and text. I mean, there were avatars involved.

Shaffer: Yes. And sometimes dressing up. But not too much.

Correspondent: Oh. You dress up sometimes when you tweet or when you write? You pull like one of those Tom Wolfe things where “Well, I wear the white suits in public, but when I sit down for the typewriter, it’s all jeans all the way”?

Shaffer: Well, I do wear kilts a lot when I write. But not to assume a different identity. Just because, well, they let my balls hang out.

Correspondent: Oh, I see. Well, we were talking before we were rolling, or before I insisted that we roll because I want to get this very important info on tape, that there actually is an index. It’s not in the galley I have. But there is an “Index TK.” So I’m wondering: why did you feel that this hefty narrative required subjects and topics to guide the reader through the life of Anna Steal here? What is this index?

Correspondent: What are some of the samplings?

Correspondent: Oh, I see. That would have helped me. Because it does take quite a while for the first sex scene to happen.

Correspondent: But I had patience for you.

Correspondent: I was willing to wait for you.

Shaffer: Oh, thank you. Thank you. In the original book [Fifty SHades of Grey], people would say, “Oh my gosh.” They would go through and count up how many “Oh my Gods” there were or whatever.

Correspondent: There are websites for this?

Shaffer: It’s just one sentence. “Oh my! Oh my!” And so people have actually counted up how many. Because it’s repetitive. And I think if there had been a traditional editor on the original books, they would have cut that out. So people have gone through this. So I said, “You know what? I’m going to have that in my book.”

Correspondent: So you did that with “the” and all that?

Shaffer: Some of the stuff. So at the end of the book, the index actually says like “Oh my!” and then “parentheses overuse of.” And then I list every time I’ve overused that phrase in the book.

Correspondent: And it’s a great way of expanding the page count. So you do less work. Or do you? Do you have some sub-editor go ahead and deal with the index? Assign someone else to do it? And meanwhile, you sit back and collect your hefty advance, living like the lord of the manor.

Shaffer: The funny thing about that is that every time they compile, they ask you if you want an index compiled. And who does that? It’s the copy editor usually. Or your editor or something. And they ask, “So what are some things you would like to have in your index?” And so I gave them a couple of ideas. But then the copy editor just sort of fell in love with the book and just created this whole list. “I hope it’s okay that I inserted my own stuff in here.”

Shaffer: And so she put her own different things in there.

Correspondent: The copy editor fell in love with your book. Didn’t go ahead and get out the ruler and rap you across the wrists, like they usually do.

Shaffer: No. I had an instance with — I was just talking with one of my other editors at Harper Perennial today. I had an editor on my first book — a copy editor that didn’t seem to get all of my references. And so it was very awkward when I got back this copyedited manuscript. And I think I had a chapter titled something like — it was a book on philosophy, but I had a chapter. Something like “Ain’t Nuthin’ but a ‘G’ Thang Baby.” Or something along those lines. And I got this back from the copy editor. It had been crossed out. It said “It is Not Any Thing Except for a G Thing.”

Correspondent: (laughs) They’re a little stingy there at Harper.

Shaffer: Well, I just think it was clear that she didn’t get the reference.

Correspondent: So you have to forward YouTube links to copy editors in order for them to actually understand what you’re talking about.

Shaffer: I think sometimes. I think it’s coming from a good place. And I’m glad — it makes my book look a lot better when it’s copyedited and edited and everything. But there were some times I had to stet stuff with that book. And for this one. There was one joke in Fifty Shames where Earl Grey says, “I’m part of the .00001%.” He says, “I have certain perks for being part of that.” And so it’s written out “.00001%.” And in the copy editing, I got it changed. Actually written out “I’m part of the one millionth percentile.” And it kills the joke.

Correspondent: So is there an Andrew Shaffer style guide that you have for Harper and for Da Capo? (laughs) For Fifty Shames?

Shaffer: For Da Capo, they created a style guide actually that had everything listed out. It was just the most bizarre list of stuff. And it’s actually mostly what appears in the index. There were dinosaur names. The Kosmoceratops was a dinosaur. And I actually got into a great back and forth with my copy editor.

Shaffer: On the correct ways to capitalize and italicize dinosaur names. So I think, yeah, the copy editor was great on this book. She totally got it. But I think we learn stuff from each other. It was a good working relationship.

Correspondent: Were there any, shall we say, belligerent conference calls at all? Any David Foster Wallace style longass emails about “If you cut this particular phrase” and there’s a six page explanation. Anything along those lines?

Shaffer: Oh my. Well, you know, I really rely on the editors, like I said, to make me look good. I think that a good editor is just invaluable. At least for me. I think maybe there are other writers who can turn out a great first draft. But I’m not one of them. So I’m thankful for all the help I get. And so therefore, when I usually get stuff back from them, I usually go with everything. I stet very few things on a manuscript. Because I think, “Okay, they’ve really got a great idea of where this should go.” Probably better than I do sometimes. But I was a little concerned because when I sold this book, I did not know the editor who bought the book. And when I looked her up on Publishers Marketplace, everything else that she had done was, for the most part, like vegetarian or vegan cookbooks.

Shaffer: And I was like, “Did she think that Earl Grey was some sort of food book or something?” Oh no. This is not a book about tea.

Correspondent: You could have made Anna Steal a vegan.

Shaffer: Oh, I could have.

Correspondent: Sorry to have only proposed that idea.

Shaffer: Maybe the next book.

Correspondent: If only I had been there during the creative process.

Shaffer: And I’m actually a vegetarian. I was like, “Did you sign this book because I’m a vegetarian? Is there some kind of club I belong to now?”

Correspondent: Really? They can smell it on you.

Correspondent: I didn’t know you were a vegetarian. Is it fairly recent?

Correspondent: Okay. Have you had any dark meat cravings? Climbing up the walls at night? Screaming like The Lost Weekend or something?

Shaffer: No. Because I’m actually a pescatarian.

Correspondent: Oh, you’re one of those.

Shaffer: So I can eat fish. But I always explain it as vegetarian. Because I have a very hard time. Because if I explain pescatarian, it will lead to other questions like “My mother likes pork. Can you eat pork?” I’m like, “Okay. Let’s just go with vegetarian and just assume I can’t eat any meat.”

Correspondent: Well, we’re in New York here. We have plenty of pescatarians. In fact, everybody I know is a pescatarian. I’m one of the last guys who eats red meat around here. I had a burger for lunch.

Correspondent: Without guilt. Though I did dine with a pescatarian.

Shaffer: Well, I ate meat for many years. And it was for cholesterol reasons, actually, that I switched over. But the editing of the book. One of the interesting things. So I sent the draft in to the editor. And she sent it back to me over