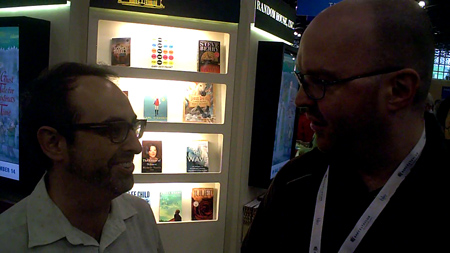 The following is a transcript from an impromptu conversation with Gary Shteyngart at BookExpo America. Due to inexplicable file degradation, the color within the video is not what it was in reality. Mr. Shteyngart’s skin proved so stunning that it caused at least 300 heads to turn during the course of the interview. And we only talked for two minutes! 300 heads in two minutes isn’t a statistic to easily discount. We regret to report that the video degraded, thus sullying Mr. Shteyngart’s charismatic complexion. There were several attempts at color correction, but the technical team proved too lazy (and too deadline-challenged with paying work) to do anything about it. So we present the results from the decent elements we could cobble together. You can listen to the conversational madness by playing the file at the bottom of this post. This Shteyngart guy, who is apparently under forty and designated as “hot” by The New Yorker, has some novel coming out called Super Sad True Love Story, which we hope to read more closely. We were unable to perform the appropriate tests to confirm Mr. Shtyengart’s “hotness,” but we hope that some scientific authority will gauge his body temperature in the immediate future and prove the inevitable.

Correspondent: Yeah. Would BEA be the apocalypse?

Shteyngart: This is the end of all-known literature. After today, no more books.

Correspondent: Yes, I know. It has too many modifiers.

Shteyngart: Oh my God! Modify this! This is definitely it. I’m hanging up my gloves and I’m becoming a duck farmer in Maine.

Shteyngart: It’s what Henry Roth did. After he wrote Call It Sleep. he became a duck farmer. Every good Jewish boy becomes a duck farmer.

Correspondent: And there’s a new Henry Roth novel coming out from scraps! So you have a bunch of scraps you’re sitting upon while you’re writing. While you’re doing the duck farming.

Correspondent: Well, this is apocalyptic. There are credit poles involved. And there are numerous aspects. I’m curious. Was your checking balance poor these days? Or what happened?

Shteyngart: Well, you know, Ed, I grew up in one failing empire. And now I’m living in America. So I’m sick of doing Russia. I said, “Hey, why not try something new?” And this country is giving so much now. Everything’s falling apart! And I love it. So I really had a good time with it. When I started writing the book in 2006, I predicted stupid things like the collapse of the financial system. And then it actually started happening. So I had to make it worse and worse and worse. So in the end, everything gets bought by a huge Norwegian hedge fund.

Correspondent: So you contrived all these apocalyptic aspects years before they happened. And yet the novel takes two years to come out.

Shteyngart: Thank you. You too!

Shteyngart: We’re what? Like 73 at this point, I am? Excellent.

Correspondent: I don’t know. You do the math.

Shteyngart: I can’t do math.

Correspondent: All right. You can write novels though.

Shteyngart: Yes, I’m trying. I’m trying so hard to write them. Oh, but this is the last one. From now on, duck farming.

Correspondent: Unless of course, you’ve already written three before this in the future.

Shteyngart: Yes! And somebody bought the options to the movies. Then we’re set.