On Thursday, just before the infamous Tanenhaus panel, I attended the Chris Anderson talk on “The Long Tail,” which isn’t just an article anymore, but a full-fledged book coming out in July. Anderson was introduced by Will Schwalbe, the editor-in-chief at Hyperion. Schwalbe noted that Anderson has adopted an interesting speaking practice. He will speak to crowds for free, but he will only speak to those he can learn from. I suppose this means that remedial English classes might be out of luck for an Anderson lecture in the immediate future. 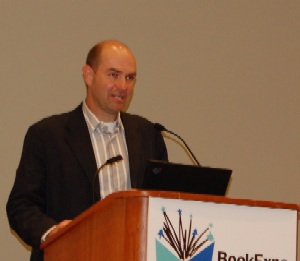 In any event, Anderson began his presentation by noting that March 21, 2000 was a very special day. It was special not because this was the first day of spring and certainly not because this was five days before the NASDAQ plummeted. Rather, Anderson insisted it was special because of *N Synch’s No Strings Attached sold somewhere in the area of one million copies that day. The album would later go on to sell 2.41 million copies. But Andreson was convinced that the *N Synch album was the peak of the blockbuster album. Anderson insisted that the considerable dip in albums since this treacly boy band arose from a cataclysmic shift in the music industry from an album world to a singles world. This was a case of the music industry losing leverage. And I’m sure you smart readers can see this coming, but this was a key indication of what Anderson has identified as “the long tail.”

The long tail, not to be confused with a particular anatomical tuft on a rabbit, is, of course, Anderson’s very Gladwell-like theory which factors in the culture of specialization, economic theory, power law and a little bit of that ol’ pop culture just to seal the deal. The room, of course, was mobbed by interested parties, hoping to apply some of Anderson’s rules to the publishing industry.

While Anderson, equipped with a Powerpoint presentation and a slight grimace, seemed to be addressing his speech to a general crowd. (Generalized speeches about generalized arguments often will do that.) For anyone familiar with Anderson’s work or his findings, it won’t come as much of a surprise that an average of 25% of products live off the grid, as it were, representing that untallied array that still beckons with economic life (say, that record which your typical music clerk geek is hustling onto friends and family or that seemingly obscure book that has a small following). Where the 20th century was dominated by the bell curve, Anderson believes the 21st century will be governed by the long tail.

He offered five long tail lessons for the audience: (1) limited distribution with shared taste, (2) everyone deviates from the mainstream somewhere, (3) one size no longer fits all, (4) the best stuff isn’t necessarily at the top (see, e.g., Sturgeon’s law), and (5) the mass market is becoming a mass of niches.

Again, I was troubled that Anderson didn’t have a way of tying his interesting points in to the publishing industry. One can speculate and display Powerpoint slides until the cows come home, but, in the end, everyone needs a steak to throw onto the barbeque.