Make no mistake. BookExpo America is an industry convention. If something here looks, feels or breathes cash potential, the men dressed in blue blazers and the well-coiffed and often middle-aged women dressed in conservative skirts rarely extending above the knee will be on it like loyal johns courting a favorite prostitute.

The hell of it is, nobody really knows what they’re doing. Least of all the panelists.

There was no better indication of this then this morning’s disastrous “How to Leverage a Podcast” panel, which Carolyn Kellogg and I (both of us being podcasters and both of us being more than a bit curious about how marketing language sashays with the medium) attended by the slimmest of time margins. A slick-sounding, bearded man by the unlikely name of Tee Morris led the proceedings. Morris, who hadn’t even bothered to don a business suit for this almighty trade show, was the author of Podcasting for Dummies. The room was filled with starry-eyed entrepreneurs looking up at this marketing majordomo and feeling a bit disappointed. He came across as a huckster without a clear plan. Many of the people walked out of the presentation, in large part because Morris’s approach was more “MAKE MONEY FAST!” than any practical summation of how a podcast can generate revenue or what it could do for publishing or how it could be ABOUT something. 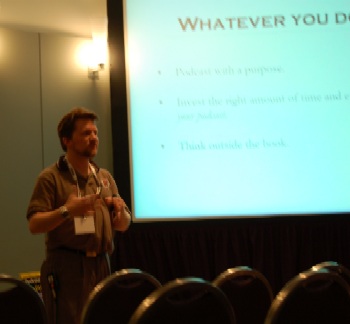 In a mystifying move, Morris didn’t really zero in on publishing-based podcasts until forced into topical alignment by the slightly more coherent Rob Simon (the man behind this year’s BEA podcasts), who, rather fittingly, stood behind a podium on a slightly raised dais while Morris gesticulated on the ground floor.

What were, for example, the Battlestar Galactica podcasts? “It’s basically a director’s commentary on demand!” exclaimed Morris.

There were even some crazy gender assertions. “Women are [making podcasts] better than men. They are just keeping quiet about it.”

Morris seemed particularly proud of the way one publishing house (he couldn’t identify whether it was Simon & Schuster or Random House) came specifically to one particular podcast for sponsorship. And he failed to offer a clear plan to the hopeful attendees other than to get podcasts listed on major directories and try and get linked by other sites.

Perhaps intoxicated by the Web 2.0 fervor, Morris tossed all manner of buzz words and catchphrases into the fray.

“Podcasting is the next big thing.”

He even quoted McLuhan’s motto, “The medium is the message.” 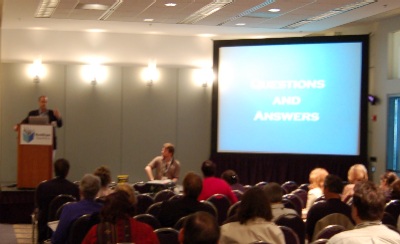 Carolyn and I watched slackjawed as Morris fumbled repeatedly, failing to point out the “literary” in “literary podcast.” Despite his unabashed zeal, Morris dodged one fundamental thing that makes podcasts work: the fact that they have an identity that runs counter to the bland conduits of corporate radio. He never suggested once to the podcasting hopefuls that they might learn a few lessons by, say, listening to a few podcasts before making a strike for the mythical cash vein.

And can one really trust a guy who refers to himself in the third person? “If you’ve never heard of Tee Morris until today,” Morris started, “you will eventually.”

“Podcasts need to be branded!” How?

There was an attempt by Rob Simon at coining a new catchphrase: “Think outside the book.” Apart from the bastardization of a now tired corporate buzz phrase, shouldn’t a publishing-based podcast be thinking very much inside the bok?

Morris also cited Cory Doctorow as an example of a successful podcaster, but failed to note that he also runs Boing Boing, one of the most popular blogs on the planet and that this may have had a bit of a hand in getting people to listen to the podcast.

Morris did have a few good points, such as the idea of using a podcast to reach to the hard-to-reach white male audience in publishing. But even this still limns Morris’s troubling approach, perhaps symptomatic of most of the Web 2.0 panels here: throw heaps of statistics at the crowd and expect them to draw mystifying associations.

Welcome to the publishing industry.