As reported elsewhere , this week’s NYTBR has not only been redesigned (of which more anon), but features a list of “pure creatures of the Internet”. What strikes me initally about David Orr’s article is how much it misrepresents online literary coverage and litblogs as a whole. Orr vilifies “the worst lit bloggers,” who “sound like what you’d get if you seated the title characters from ‘Heathers’ around the Algonquin Round Table and gave them a photo of Zadie Smith on a bad hair day.” (Gee, like we haven’t heard this before.) Never mind that Joe Queenan’s review of A.L. Jacobs’ The Know-It-All contains an equally snarky tone (and let’s face it, you don’t hire Queenan unless you have an axe to grind) or that the print reader is urged, just underneath the list of contributors, to go to the Times website to “connect to the Web sites in David Orr’s essay,” as if typing a URL into a browser were some unthinkable act of Euclidean geometry. Furthermore, Orr condemns Maud Newton for having the effrontery to indulge in “the chronic vice of blogs — has she mentioned her fellow bloggers? And how clever they are? And how she really, really likes them?” This when Dennis Loy Johnson has thoroughly documented the ongoing Times circlejerk and when Deborah Friedell can’t refrain in the same issue from using David Brooks as a comparative example (as if Brooks were the only conservative columnist writing today). And then there’s Neil Genzlinger’s bulleted approach to books, conspicuously culled from the humorous bulleted lists found so frequently at Old Hag, Gawker and TMFTML over the past year. 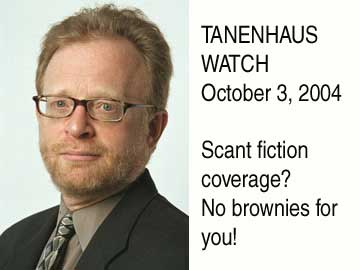 But more importantly, there’s the myth and hype of this impotent redesign, which has been carefully tailored to create less column inches for books and foster an illusion of pith (this week’s NYTBR runs 40 pages, although 10 of them are full-page ads) — all this while leaving fiction (and, in particular, literary fiction and poetry) in the dust heap. If you compare today’s NYTBR with previous issues, you will now find sidebar quotes taking up a full column to the left or right of the reviews, as well as more room for (yes, you guessed it!) ads. In addition, the accompanying photos are much larger. Whether this was Bill Keller or Sam Tanenhaus’s idea, it’s difficult to say, though I suspect that this had something to do with Keller’s concerns w/r/t the Almighty Dollar.

The overall impression I have is a Times graphic designer trying to justify shorter reviews as “full-length reviews” with previous full-length reviews (crossing over 1,000 words) now stretched across two pages.

Don’t believe me? Okay, if you have the Times in your hand, it’s time to grab some scissors and tape. Take Zoe Heller’s review of The Surrender and cut out each column on pages 36 and 37. Ignore the bigass Toni Bentley picture altogether. You’ll find that you can place the entire text comfortably on one full page. (And as an aside: why have Zoe Heller giving press to Wieseltier’s well-documented fetish when she could have tackled a more intriguing memoir such as Valerie Hemingway’s upcoming Running with the Bulls?

This is the NYTBR‘s new direction in a nutshell: lurid sensationalism, spotty coverage for fiction (averaging at 1,322 words a book for seven titles, including the longass Roth review), almost nothing for poetry or literary endeavors, and gonad-hard coverage for nonfiction (averaging at 794 words a book for fifteen titles, including the Genzlinger roundup).

We had our quibbles with Chip McGrath, but for those not keeping score, that’s 14 fiction titles and 13 nonfiction titles. And McGrath’s fiction coverage includes two hot titles, two first novels, and a Chinese fiction writer.

But here are some more interesting comparative stats:

Let’s ask ourselves a few questions:

We’ve heard promises and pledges from Tanenhaus before that fiction was a priority, but it’s clear with these new changes that he’s living in a world where storytelling and poetry no longer matter, save only through the strange “FICTION” placards Tanenhaus might occasionally see at bookstores. It’s one thing to single out neglected titles alongside the Best Sellers list (of which, we whole-heartedly approve). It’s another thing to reduce said coverage to Entertainment Weekly-sized blurbs while deferring fiction reviews to a book with built-in sales like The Plot Against America that, frankly, doesn’t need another 5,000 word review. Until Tanenhaus can demonstrate that the NYTBR contains book coverage that truly reflects “all the news that’s fit to print,” we will deny him any and all tasty brownies cooked in the oven. And that includes the ones that Toni Bentley might be baking.