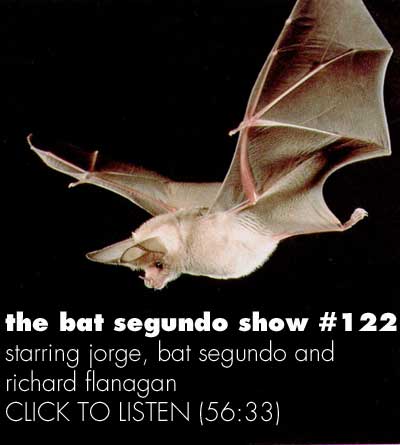 Subjects Discussed: The novel as a warning, interviews with overly serious journalists, the novel as a mirror to the world, the inspiration of Heinrich Böll’s The Lost Honor of Katharina Blum, the tradition of using other people’s plots, Jonathan Lethem’s essay on copyright, the obsession with intellectual property, heightened metaphors, people living without land and love, the remarkable disconnect between the author’s intentions and the reader’s perception, the amount of noise in the world, using brand names in language, plagiarizing from infotainment, not wanting to repeat Gould’s Book of Fish, on being innately semiotic, the Sydney Morning Herald, bourgeois broadsheets vs. yellow journalism, absolute vs. relative truth, on being savaged by the Tasmanian media, the despair of politics, the difficulties of the word “terrorist,” why books are a better conduit for truth than other mediums, the seduction of evil, and Gabriel Garcia Marquez’s comparison of Hemingway and Faulkner.

Flanagan: A book has many faces. I mean, in the end, a book isn’t what a writer thinks it is. A book is what a reader makes of it, when they lend the authority of their lives and their souls to it. But, for me, I was determined to try and escape politics with the book. I wanted to find a simple parable — that it would act like a mirror to what the world was now. I felt the least useful thing I had were my opinions, my attitudes, my politics. I wanted to abandon all that. I just wanted to try and live within the world the way it was, and have a story that spoke as accurately as possible to it, in a way that might lead me and hopefully the reader to some broader sense of what the world is now. But I didn’t know what the world was. And I don’t pretend to have any clue. I have even less clue actually. But it’s always in story that things are revealed. Not in the author’s attitudes.